You may have already seen this video, How To Become Diabetic In Six Hours, produced by a doctor who’s selling yet another low-fat, Ornish-style diet. I don’t expect any low-carb types to be fooled, but give it a look just for fun and then we’ll analyze the bologna.

A quick recap in case you couldn’t play the video: Dr. Delgoofy tells us that dietary fat causes insulin resistance and diabetes. To prove the point, he swallows a half-cup of olive oil and – horrors! – his triglycerides nearly double. Then he consumes a big ol’ sandwich and some pizza and – double horrors! – his triglycerides rise to 214, and his glucose shoots up to 131. This, he assures us, proves that dietary fat causes diabetes.

As I often say about journalists after reading slanted news stories, I can’t tell if this guy is intentionally dishonest or merely stupid.

Let’s start with that shocking rise in triglycerides after Dr. Delgoofy cannonballs a half-cup of olive oil. The horror music was a nice touch, but the result is about as horrifying as drinking a gallon of water and then discovering that the volume of urine in your bladder has doubled an hour later. In fact, if you ever swallow a half-cup of oil and your triglycerides don’t rise dramatically, check yourself into a hospital pronto and ask them to find the blockage in your digestive system.

The reason you find a long list of “essential fatty acids” listed in biochemisty textbooks is that — surprise! — your body needs fats. Your hair, your nails, your brain, your nervous system, your cell walls, your hormones, etc. — they’re all fat-dependent. Now, I suppose in theory you could fill a hundred syringes with fat and inject the stuff where it’s needed, but that would probably hurt. Plus your body likes to break nutrients down into little-bitty pieces before using them.

Consequently, most of us prefer to get our essential fats by eating them. The digestive system then does the work of breaking them down into itty-bitty pieces and packaging them as triglycerides — three fatty acids bound up with a glycerol molecule. Then the triglycerides are delivered to your tissues through your bloodstream.

So when Dr. Delgoofy showed us that the triglycerides in his blood doubled after a big belt of oil, all he proved is that his liver and bloodstream are in working order. If Dr. Delgoofy is a real doctor, then he surely knows that eating always raises triglycerides. That’s why doctors measure your triglycerides after a 12-hour fast. To give you an idea of how dramatically eating a meal can affect the measurement, here’s a tidbit I found online:

My blood triglyceride level was alarmingly high 497 mg/dL. It turned out to be a false result. A nurse sent to my home by my life insurance company had taken my blood sample just a few hours after I ate lunch. When my doctor drew my blood after an overnight fast during my annual physical a few months later, my triglyceride level was 97.

One of the most common triglyceride myths is that eating fats increases triglyceride. But that’s only a half-truth, since fats do indeed increase triglycerides – but only if triglycerides are measured after eating. Depending on the quantity of fat consumed and other factors, triglyceride levels can reach around 300 mg/dl after a fat-containing meal, only to descend rapidly.

The real story is that fats in the diet decrease triglycerides – at all other times except after a meal. The higher the fat content of your diet, the lower your triglycerides will be in a fasting blood draw. This has been well-established in numerous diet trials comparing low-fat with low-carbohydrate diets.

After demonstrating a perfectly normal rise in triglycerides after swallowing olive oil, Dr. Delgoofy continues his anti-fat demonstration by chowing down on a big sandwich and some pizza. Lots more fat, of course, but now he’s also consuming a heapin’ helpin’ of refined flour. Surprise, surprise … when he checks his blood levels awhile later, his triglycerides are up again, and so is his blood glucose level. 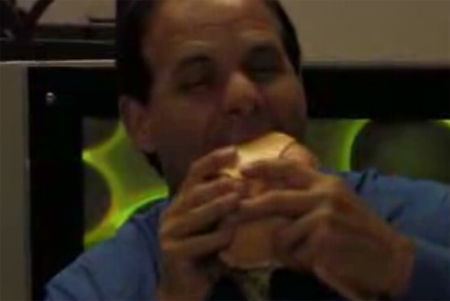 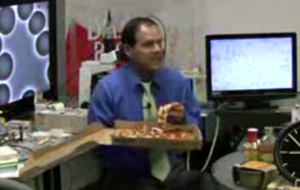 Once again, if he’s a real doctor, he knows perfectly well the rise in glucose was caused by the bread and the pizza crust, not the cheese and the meats. If he wanted to prove fat spikes blood sugar, he could’ve simply shown us a glucose reading after the olive oil. But nope … he stuffs himself with white flour, measures his glucose, then hopes to fool us into blaming the fat.

After seeing Dr. Davis give a lecture on the low-carb cruise, I got into the habit of checking my glucose after meals. Meats, eggs and cheeses barely cause a blip. But one white potato pushed my blood sugar up to 162. A small serving of pasta kicked it up to 174. After reading the latest book by Drs. Eades & Eades, my mom was finally persuaded to go on a low-carb diet. A few weeks later, her fasting glucose was down by 20 points. Her blood pressure and triglycerides dropped as well.

If her current diet is going to cause type 2 diabetes, I’d sure like for Dr. Delgoofy to explain the biochemistry of how that’s going to happen. I’d also like for him to point out the people who ate low-carb, high-fat diets and became diabetic in the process. I can certainly point to type 2 diabetics who were able to stop taking insulin shots after going low-carb.

Dr. Delgoofy tells us we should limit our dietary fat to 15% of total calories. Let’s back up to the beginning of his presentation and see how that’s working for him. Take at look at the fasting blood-work he showed us before consuming the olive oil:

The triglycerides are impressively low, so I’m guessing he doesn’t eat much sugar or other refined carbohydrates. But his HDL is an anemic 37. Mine was 64 last time I had it measured. As I found while digging through the American Heart Association’s data some months back, it’s low HDL that’s associated with heart disease, not high LDL. Here’s what the AHA itself says about HDL:

So even according to a kindred-spirit, fat-phobic organization, Dr. Delgoofy’s HDL is too low. Mine’s great. That’s because I eat plenty of fat. While we’re at it, let’s compare more of our cardiovascular markers.

Dr. Delgoofy told us his LDL is too low to be measured. The word to describe that claim rhymes with “tullpit.” Unless you want to spend a lot of money for a complicated lab test, LDL isn’t measured; it’s calculated by something known as the Friedewald equation, which looks like this:

His LDL is probably lower than that because of the limitations of the Friedewald equation. But if he walked into a doctor’s office and had his lab work done, he’d be told his LDL is too high and his HDL is way too low. Meanwhile, here’s how my LDL would be calculated:

Mine would also be over-estimated. But going by the standard tests, I win that contest. Now let’s look the other ratios commonly used to predict heart trouble.

A virtual tie on the last one. But on every other ratio, the guy whose diet is more than 50% fat is kicking the pants off the guy who tells us to limit our fat to 15%.  And by the way, my fasting glucose level is better too. His was 96. To prepare for this post, I checked mine this morning. It was 85.

Given his low triglycerides, Dr. Delgoofy’s heart is probably healthy. I sincerely hope so. But after seeing this video, I have doubts about his brain.

86 thoughts on “How To Become Stupid In 5 Minutes”