Turns out that despite my frequent criticisms of the bed-wetters, they actually saved the whole world from dying. I know this because they’ve told me so on Twitter.

I pointed out that we can stop panicking because the despite the rising casedemic, the deaths and hospitalizations in places like New York have plummeted to near-zero. Like this:

That’s because of the lockdowns and the mandatory masks! the bed-wetters informed me. The pandemic is under control in places where the authorities took HARD ACTIONS! 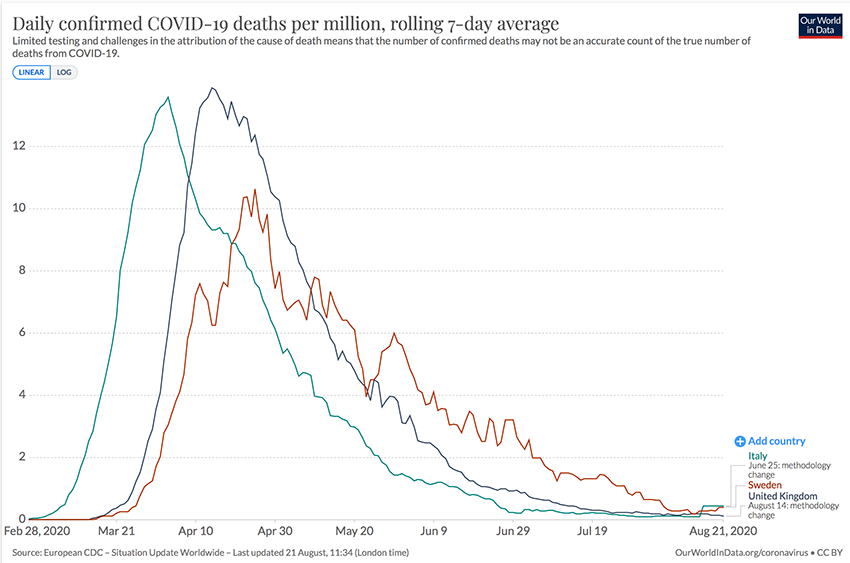 Hmmm, looks like the deaths in Sweden peaked a little later and then plummeted a little later, but the curve is nearly identical … except with fewer deaths per million people at the peak. That would almost suggest lockdowns and masks have little if any effect on how the virus spreads.

There are seven U.S. states that never issued stay-at-home orders. They’re the ones highlighted in yellow below. I also circled South Dakota because the state didn’t close any businesses either. It’s the least bed-wetting of all states. Notice the low death rate (the scale is deaths per 100,000 people).

Oh, yeah, sure! That’s because those states don’t have big cities!

That’s what the bed-wetters told me. Apparently they didn’t do well in social studies classes. Look at the states in the bottom half of the chart. Big cities in those states include Seattle, Portland, St. Louis, Memphis, Nashville, Louisville, Milwaukee, Kansas City, and Oklahoma City.

The bed-wetters seem to think people in low-population states like South Dakota spread themselves evenly across the land. They don’t. I used to do comedy tours in those western states. You can drive for hundreds of miles and barely spot a house. Then you get to a city with actual people (and a comedy club). I know that’s how it is in those states, but I nonetheless checked the data on a U.S. census site. Here are percentages of the population in several rural/western states who live in what the census bureau labels as urban zones: 90% in Utah, 80% in Oregon, 73% in Nebraska, 70% in Wisconsin, 66% in Oklahoma, 64% in Iowa.

So yes, even in those low-density states, most people live in or near cities. And please refer back to the chart and tell me which BIG CITIES in Mississippi and Rhode Island explain their high death rates.

June begins around week 23 most years. So what do we see in this chart? Yup, we see summertime spikes (or a SECOND WAVE! if you prefer) for respiratory infections in Florida. That’s the usual pattern.

Here’s a chart showing visits to a medical provider for flu-like illness in Florida in 2009.

See that big second spike beginning in the summer? Once again, this is normal.

The seasonal flu curves for northern regions and southern regions aren’t the same. Southern regions show a spike in the summer months. That’s why summertime COVID deaths rose in Florida, and it’s why they’re rising in places like Peru and Brazil.

And by the way, Peru took HARD ACTION that was harder than almost any other country … which makes this headline interesting:

The country with the world’s strictest lockdown is now the worst for excess deaths.

Here’s a chart comparing deaths in Peru (world’s strictest lockdown) to deaths in Brazil, which didn’t take the HARD ACTIONS the bed-wetters insist saved the world: 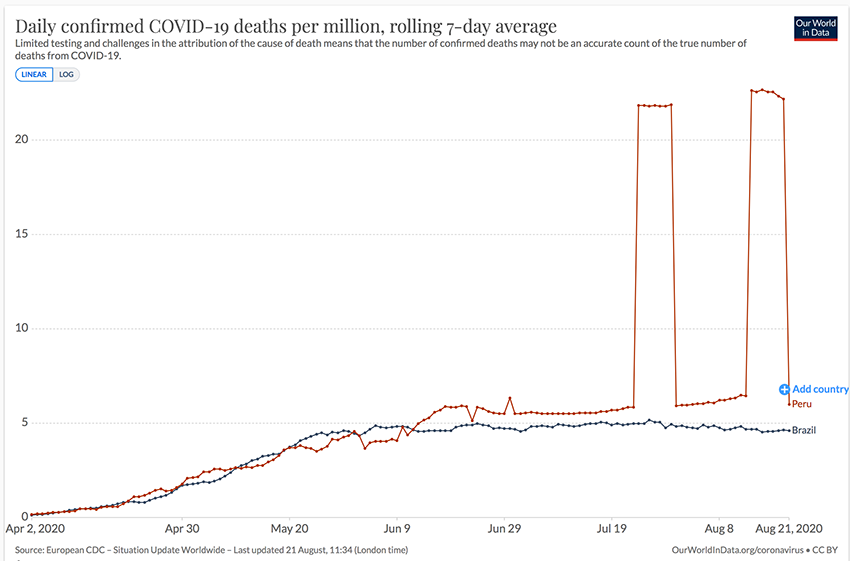 Oh, yeah? Well, if Florida had a summertime rise because it’s in the south, how do you explain the fact that Italy didn’t get a big summertime rise too? Huh? Italy is south, ya know! Huh?

Because when one of their Grand Plans fails to fix a problem – or even causes more harm than good – The Anointed never, ever, ever admit the Grand Plan was a bad idea.

As you know, I borrowed the term The Anointed from Thomas Sowell and his book The Vision of the Anointed. In speeches and blog posts, I’ve summarized Dr. Sowell’s description of how The Anointed interpret the failure of a Grand Plan. They always decide that:

That’s what the bed-wetters are telling themselves now. One bed-wetter on Twitter recently insisted that without the lockdowns, the coronavirus would have killed 500,000 Americans. All hail the HARD ACTIONS taken by The Anointed for saving us.

And prepare yourself … they may still decide we need to do the same thing again, only bigger.

44 thoughts on “The Bed-Wetters Saved The World! (Just Ask Them)”