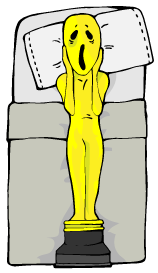 There’s no shortage of bed-wetters among the media, of course. Most media types have been dutifully supporting the view of The Anointed that by gosh, we can’t get back to normal gatherings UNTIL IT’S SAFE! Well, that is … uh … unless people are crowding together for purposes that meet with their approval. Then the idea that crowds will spread the coronavirus just kind of vanishes. There’s a strange lack of embarrassment among news organizations that put out articles like these on the same day: 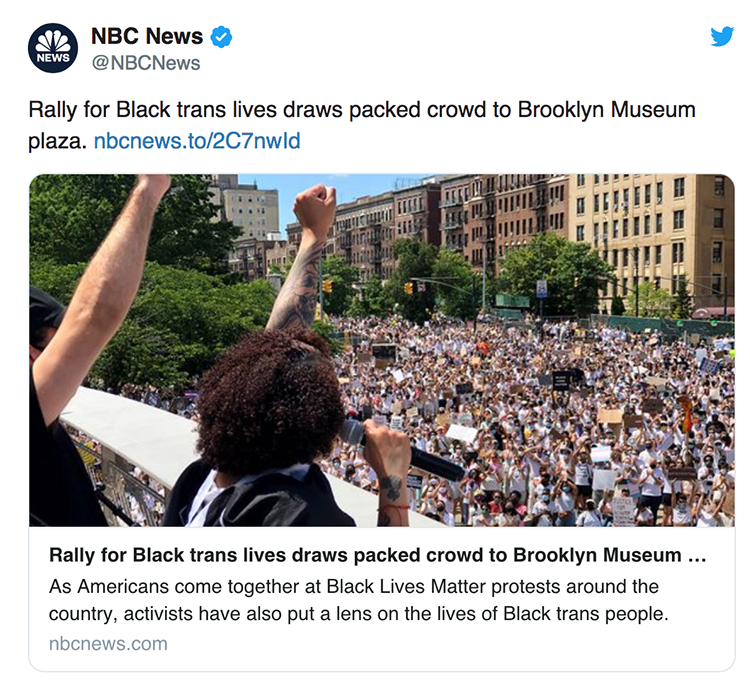 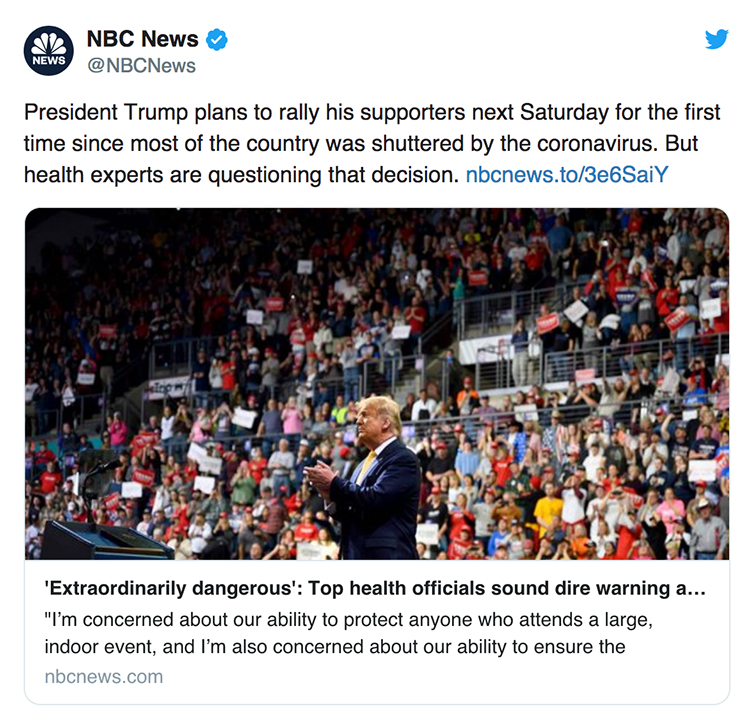 So there you have it. Large gatherings are extraordinarily dangerous, but only if you don’t like who’s gathering. Got it.

The Bed-Wetter nominees were by no means limited to American news organizations. Here’s a superb bed-wetter performance by a BBC host:

Lord Sumption, her guest, points out that coronavirus is mostly killing people who are old and have multiple health conditions. Somehow the BBC reporter interprets that as it’s killing people who would have been with us for many years.

Uh, no. It’s mostly killing people who already have one foot in the door marked EXIT. I’ll give you a close-to-home, somewhat painful example: when I spoke to my mom back in April, she told me she was very worried she would catch coronavirus and die. Had she caught the virus in her fragile condition, it may indeed have killed her, in which case she would have been counted as a COVID death. But she didn’t catch the virus. She died from a hemorrhagic stroke instead.

She was almost 84 and her brain health was deteriorating. I’m sorry she died and I’ll miss her, but I accepted more than a year ago that she was headed for the door marked EXIT. It was only a question of exactly when she’d be gone.

When Lord Sumption pointed that we will never live in a risk-free world, and that people who are afraid of the virus can self-isolate, the reporter immediately responded with But what if you’re a carrier of the virus and go to the theater and infect the person next to you! Perfect bed-wetter sentiment … which Lord Sumption dismissed by explaining the obvious: the person next to him at the theater would be there voluntarily, and could just as easily be a carrier of the virus.

I could go up and down the list and find articles and newscasts warning that WE CAN’T RETURN TO NORMAL UNTIL IT’S SAFE! from nearly every major news organization. No surprise there. Besides largely being mouthpieces for The Anointed, news reporters aren’t losing their jobs because of the lockdowns. In fact, the lockdowns have simply granted many reporters the luxury of doing their jobs from home. (Same for me: no bothersome commute since March.) If lockdowns were causing massive layoffs in the news business, I suspect the narrative would be different.

Since there are simply too many bed-wetters to choose from in the major media, I’ve selected a dark-horse winner: PsyPost.org, which describes itself as a psychology and neuroscience news website dedicated to reporting the latest research on human behavior, cognition, and society.

The winning performance was an article titled Psychopathic traits linked to non-compliance with social distancing guidelines amid the coronavirus pandemic. Let’s take a look:

New research provides some initial evidence that certain antagonistic personality traits are associated with ignoring preventative measures meant to halt the spread of the novel coronavirus SARS-CoV-2. The study has been peer reviewed and accepted for publication in the journal Social Psychology and Personality Science.

Ah, well, as we know, peer-review in psychology is a rock-solid guarantee that we’re looking at valid research … so rock-solid that most experiments can’t be replicated.

Anyway, here’s a quote from the study’s author:

“It was clear from reports in the media very early in the COVID-19 pandemic that some people were rejecting advice to socially distance and engage in increased hygiene. There can be many reasons for this, and I thought that personality may play at least a small role in it.”

And what would those personality traits be, oh wise one?

“I knew that traits from the so-called Dark Triad (narcissism, Machiavellianism, and psychopathy) as well as the traits subsumed within psychopathy are linked to health risk behavior and health problems, and I expected them to be implicated in health behaviors during the pandemic.”

Goodness. People who ignore orders to stay off the beach exhibit traits subsumed within psychopathy? Can you explain how you reached that conclusion?

“People high on the Dark Triad traits may knowingly and even deliberately put other people’s health at risk, e.g., by engaging in risky sexual behavior and not telling their partner about having HIV or STIs.”

Hmmm … seems like a rather giant case of bait-and-switch to me. I’m no psychologist, but I’m pretty sure engaging in sex without telling your partner you have the HIV virus isn’t quite the same as ignoring a governor’s orders to stay off the beach.  That’s like putting people who have two glasses of wine in a restaurant and then drive home into the same category as people who chug a fifth of gin and then pilot a commercial airliner.

“Early in the pandemic, and in subsequent months, there were numerous reports of individuals purposefully coughing, spitting, or even licking door handles in public, either as a way to intimidate others or as a way to rebel against the emerging new norms of social distancing and hygiene.”

Stupid conclusion, right? Sure is … but it’s pretty much the same (ahem) “logic” used by the study’s author. In fact, the study reminds me very much of the (ahem) “studies” that conclude libertarians and conservatives suffer from a form of mental illness. If you don’t agree that The Anointed should tell you how to run your life or your business, you might be mentally ill!

If you’ve ever read up on how those studies are designed … well, let’s just say they make Walter Willett‘s nutrition studies look like solid science by comparison. The perfessers simply design the study to produce results that confirm their own political views. Something like this:

“Jenkins, I have an idea for a study. Let’s conduct a survey to see if there’s any correlation between political preferences and traits such as paranoia, mental inflexibility, and callousness towards others.”

“Now, we need to think of some questions for the survey. How shall we determine callousness towards others?”

“How about something like, I believe people who want to become American citizens should go through the legal naturalization process instead of sneaking into the country.”

“Not bad, Jenkins. But it’s a little verbose. Let’s tighten that up to I am opposed to open borders.”

“Indeed. How shall we define mental inflexibility?”

“Hmmm, that’s a tough one. Maybe something like, I believe what is or is not constitutional should be determined by what’s written in The Constitution.”

“Outstanding, Jenkins! You’re really getting the hang of psychological research. Finally, how would we define paranoia?”

“I’ve got it: I worry that the people running our government are secret Russian assets.”

“Sorry, I meant, I worry that some Middle Eastern immigrants might be secret members of terrorist cells.”

“Much better, Jenkins. Now get out there and make some phone calls.”

“Well, Jenkins, what did you find?”

“Good work, Jenkins! Let’s write it up and send it out for publication.”

Yes, that’s an exaggeration … but not by much. Point is, these “studies” are basically meaningless. They’re designed to give the answer the researcher wants.

This particular researcher wanted to link people who ignore orders to stay off the beach to people with psychotic traits who actually enjoy putting other people in harm’s way. And so, with a little A is linked to B and B is linked to C so A is linked to C magic, he did.

When I commented on the study on Twitter, I received a few replies along the lines of But bruh! If you ignore social distancing, you’re going to spread the disease and kill muh grandmuh! That’s callous, bruh!

That’s roughly as logical as saying that if I’m sexually promiscuous, I’m going to spread STDs and then you might catch one from your wife. If that happens, I didn’t infect you. Your wife did. If you’re afraid grandma will catch coronavirus, tell grandma to stay inside, observe strict social distancing, and refuse to let anyone in her house who hasn’t also observed strict social distancing. If you pick up the virus somewhere and then pass it on to your grandmother, I didn’t infect her. You did. So if you’re that worried, stay away from grandma UNTIL IT’S SAFE!

Does that sound a bit callous? Maybe. But if I were designing a study to determine who’s heartless and callous now that coronavirus is here, I’d start with this agree/disagree question:

A bed-wetter would agree. Clearly, so did our winner of Best Bed-Wetter Performance by a Media Organization.

34 thoughts on “The Bed-Wetter Awards: Best Performance By A Media Organization”