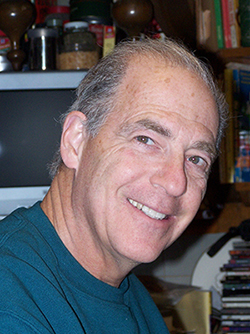 We’re on a grief break. Chareva’s father, Alan Smiley, passed away on Monday evening. Those of you who have been following the blog for a long time may recall he suffered a massive stroke five years ago that put him in a wheelchair. The physical decline was immediate.  The mental decline became obvious over the past year.

Four weeks ago, he complained of pain and discomfort and was taken to a hospital. That’s when the family learned he had cancer in his stomach and esophagus. The cancer was already quite advanced, and the only option was to give him painkillers and keep him comfortable. The doctors said he may last a few months. It was a few weeks. On Monday, Chareva, her mother, and her younger brother were sitting by his bed as he slept, and he simply stopped breathing. He was 77.

It seems like only a couple of years ago we drove to Chicago for his 70th birthday party. The damage from the type II diabetes hadn’t overtly manifested yet, and he was still a lean mean fightin’ machine. I walked around the party with my video camera and asked people to describe Alan in one word.

One neighbor thought for a second, then said testosterone.

Perfect word. The neighbor meant it as a compliment, of course. In the 22 years I knew him, I never saw Alan become mean or belligerent. But he was definitely a man’s man. He loved tools and machines. He preferred manual labor over sitting at a desk. And he had that drive! drive! drive! that seems oddly absent in so many young men today.

It was drive! drive! drive! – combined with natural athletic ability – that made Alan the star of his high school football team. He was an all-state running back known for his quickness and toughness. Going through scrapbooks in their house some years ago, I found clippings from local newspapers highlighting his accomplishments on the football field. He told me one of his fondest memories was scoring a touchdown at Soldier Field in Chicago during a city championship game.

It was drive! drive! drive! – combined with an entrepreneur’s eye for opportunity – that propelled him from the poor, working-class neighborhood of his youth to a fabulous home in River Forest, one of the Chicago area’s wealthier suburbs. Fresh out of college, Alan already had a wife and baby to support. He was trying to make ends meet as a furniture salesman when he asked himself a question: These large companies buying all this new furniture … what do they do with the old stuff?  Then he asked the large companies. Then he had an idea.

He soon established a business that bought old office furniture and returned it to shiny newness through a process called electrostatic painting. Turned out there were a lot of companies and individuals happy to buy used office furniture if it sparkled like new.  Alan’s business was a success. He bought the fabulous house in River Forest when was he a young man in his thirties.

Later in life, he re-focused his business as an on-site electrostatic painting service. Thanks to the quality of his work — and his drive! drive! drive! – he became known as The Guy to call in Chicagoland if you wanted something made of metal to sparkle or shine.  If you’ve visited any landmarks in Chicago, you’ve probably seen Alan’s work.  He painted metalwork in Millennium Park, the Sears Tower, the Newberry Library, the Art Institute, and the Museum of Science and Industry. He painted the metalwork in Michael Jordan’s townhouse.

In Good Calories, Bad Calories, Gary Taubes suggested that we have the relationship between leanness and physical activity backwards. We assume that physically active people are lean because they’re physically active. It could be the opposite: naturally lean bodies don’t like to store energy as fat, so naturally lean people feel a compulsion to move to burn away the energy.

Alan was naturally lean, and he certainly had a compulsion to move. I remember him dancing the legs off of several women at our wedding reception. He’d wear out a dance partner, then go extend a gentlemanly hand to another one. I don’t think he sat down for more than five minutes after the dinner.

Keep in mind, the electrostatic painting was a physically demanding job. Just hauling the heavy paint guns in and out of a job site would qualify as a workout for many people. You’d think the guy would’ve spent his days off sitting in an easy chair.

Nope. Chareva remembers that on his days off, he always wanted to hop in the van and go exploring, or go to a hardware store to buy materials for some building project.

His best-known building project was the Ashland-Iowa Express – the riding train he built around the perimeter of his property, complete with switches to alternate tracks, crossing barriers, and a bridge. He’d always loved trains and decided he wanted his own. So he drove all over creation buying tracks and train cars to fix up. When the train was ready to roll, Alan and his wife threw a big party. We flew in for it. My parents drove up from downstate Illinois. His middle-aged neighbors – doctors, attorneys, CEOs, etc. – lined up to ride on the train along with the kids. Heck, they were smiling like kids. The Oak Park newspaper even printed a story about the guy neighborhood kids called the Train Man.

The video below was taken a couple of years after the party. That’s Sara taking a ride on the train.

The picture below is of Sara, Alana and their cousin Marzhan riding on Grandpa’s train. 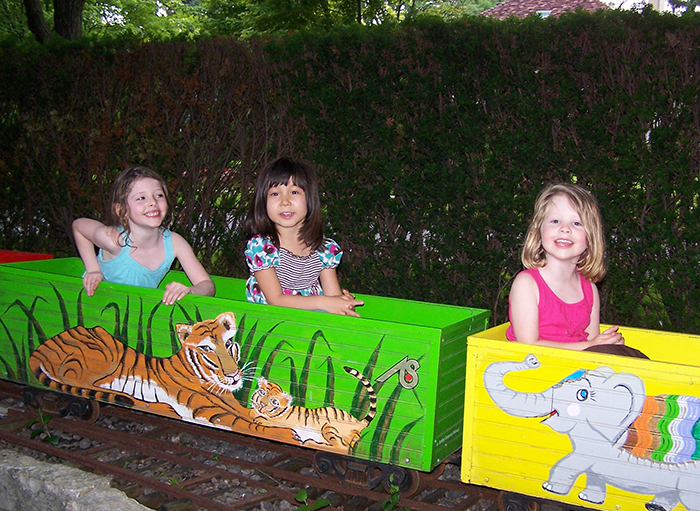 Alan was unconscious or incoherent for most of time after the cancer diagnosis, and it occurred to me later I never thanked him for who he was and what he brought into our lives. So I’ll do it now.

Alan, thank you (and your wife) for a wedding and reception worthy of royalty. I know they were spectacular events because you loved your daughter so much, but trust me, my family and friends were dazzled and talked about the wedding for years after.

Thank you for trusting (after some initial doubts) that the standup comedian would take good care of your daughter even if the comedy career didn’t work out.

Thank you (and your wife) for giving my girls all those magical Christmases in that big house with the gigantic Christmas trees that nearly reached the ceiling of the great room. Seeing Sara, Alana and their cousin Marzhan toddle down the big stairway on Christmas morning and crawl under that tree to ooh! and ahh! over the mountain of gifts was simply awesome. 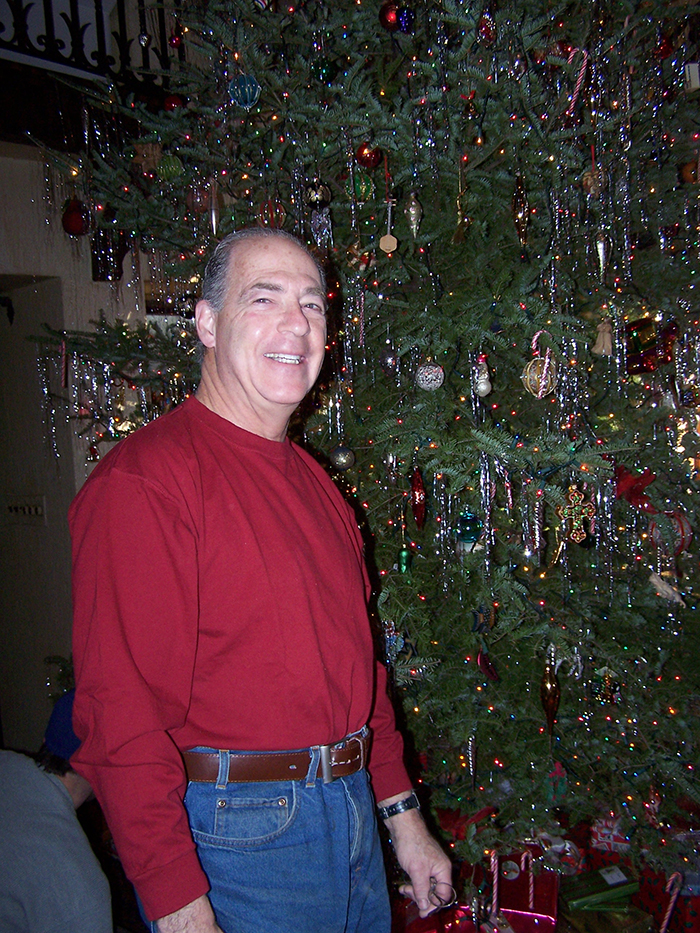 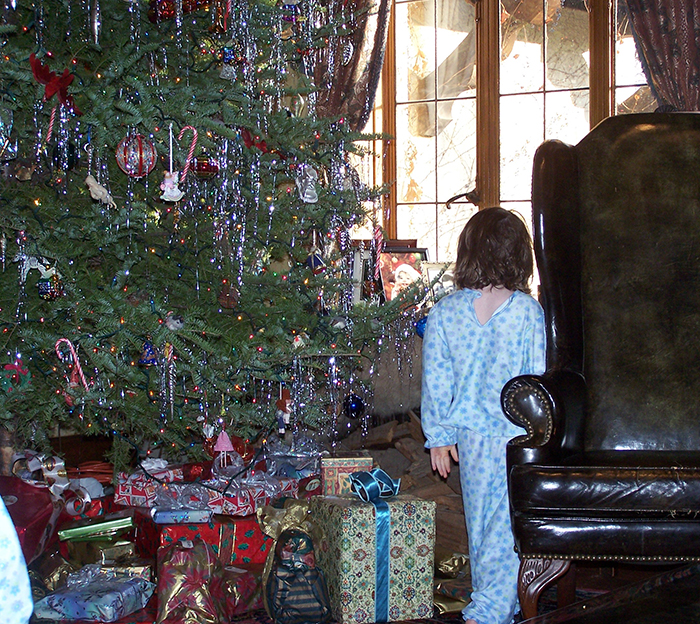 Thank you for moving to Franklin to be near us, even though it meant leaving your hometown of more than 70 years. Chareva and the girls got to see you often these last few years, and that means a lot now.

Godspeed on the journey aboard whichever train is taking you to your next existence, Alan. We’ll miss you. 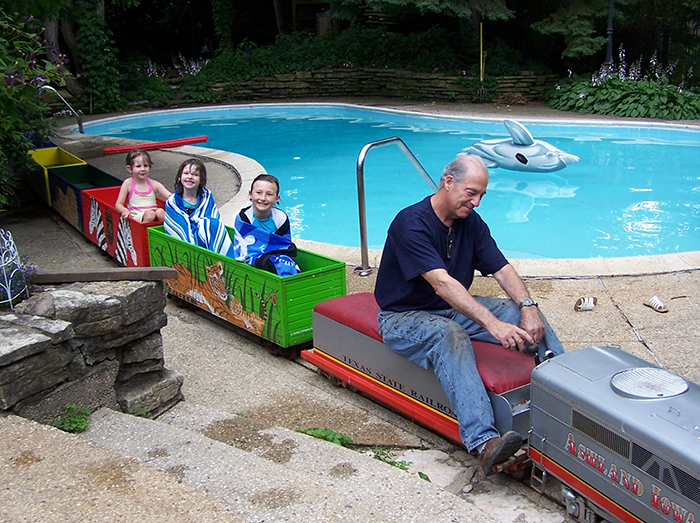 24 thoughts on “Grief Break Over ‘The Train Man’”