Here are more “this is what we’re up against” items from the news sent to me by readers:

By the diabetic diet, I of course mean a diet that will help you become a diabetic … even though that’s not quite what the National Diabetes Information Clearinghouse had in mind when designing it.

Ya know, I think what would really improve the nation’s health (NH) would be to add a few more layers (FML) to the federal government’s health bureaucracy (FGHB).  After all, they’ve done such a bang-up job (BUJ) reversing obesity and diabetes over the years.

Anyway, here’s how NCD (a division of NIDDK) is telling people to eat to manage their diabetes:

So far, so good.  But what exactly is the target glucose level suggested by experts?

Target Blood Glucose Levels for People with Diabetes
Before meals: 70 to 130
1 to 2 hours after a meal: less than 180

Well, there you have it, folks:  Diabetics should aim for post-meal glucose levels that are well into the “diabetic” range.  I guess that “if needed, diabetes medicines also help” statement is more like a prediction than a suggestion.  Of course, you pretty much have to set high blood sugar targets when your recommended diet looks like this:

Choose this many servings from these food groups to have 2,000 to 2,400 calories a day:

Ten starches and four fruits.  Good luck keeping your blood sugar below 180 if you’re already battling diabetes or pre-diabetes.  For the diabetics who are more visually oriented, the NCD (a division of NIDDK) provided this helpful graphic as well: 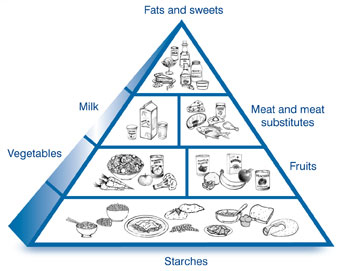 Well, I can see why they grouped fats and sweets in the same category.  They have nearly opposite effects on your blood sugar, but the important thing is that they both have an S and a T in their names.  Put a couple more letters in between those, and you can spell out what I think of the advice handed out by NCD (a division of NIDDK).

Britain’s equivalent (I guess) of the American Heart Association refers to itself in press releases as Heart UK – UK’s leading cholesterol charity.  I was of course pleased to see that description.  There are millions of people around the world who can’t afford foods high in cholesterol, and I’m all in favor helping them out.  I’ll happily donate 100 dozen eggs.

Unfortunately, it turns out the cholesterol charity is anti-cholesterol, and they’re promoting a diet to lower cholesterol levels.  Here’s their plan to “revolutionize heart health in the UK”:

Here’s the behavior strategy you need to adopt:  go to the pantry and throw out everything that includes sugar or white flour.  Then walk to the fridge and find some meat and eggs.  Cook the eggs and meat and eat them.  Then you’ll feel motivated.

Step 2 – Reducing saturated fat without compromising on treats and taste. Swapping a chocolate éclair for a hot cross bun is not life changing but the 93% saturated fat drop makes the life-saving recommendation to drop our saturated fat intake so much more achievable.

So a chocolate éclair is the key to avoiding heart disease, is it?  Next you’ll be telling me to eat soy.

They should’ve listed “nuts” last -– as a polite commentary on everything above it.  Still, one out of four ain’t a bad hit-to-miss ratio for the typical do-gooder health charity.  (I’m assuming the nuts weren’t roasted in some horrible vegetable oil.)  As for the soy, absolutely, go for it … because what the world needs now is more men with boobs –- they’ll be more understanding when their daughters start puberty.

I must say, though, I can’t help but wonder why Heart UK – the cholesterol charity is so high on soy milk.

The UCLP Ultimate Teaching Tool is available to all health professionals free of charge. The UCLP has been funded by an educational grant from Alpro soya UK.

Boy, it’s really generous of Alpro soya UK to provide health professions with free literature recommending Alpro soya UK products to their patients.  But if they were really smart, they’d team up with whichever company  finally manufactures the manssiere.

Over the Counter Lipitor?

Surprise, surprise … now that the patent on Lipitor is due to expire, Pfizer is hoping to sell the stuff over the counter.

Selling a version of the drug to consumers without a prescription would allow Pfizer to retain some of the $11 billion in annual revenue that Lipitor has been generating.

However, a nonprescription version would not be available immediately after the patent on Lipitor expires because Pfizer would first have to convince the Food and Drug Administration that consumers could take the drug without a doctor’s supervision.

That’s a bit like worrying that heroin addicts may shoot up without a drug-dealer’s supervision.

An over-the-counter version of Lipitor would no doubt be welcomed by insurers because it would cost less.

I can see the advantage there.  Ruining your muscles and your memory shouldn’t be expensive.  You’ll need to save as much money as possible to pay for the walkers and the Alzheimer’s care.

In the past, the F.D.A. advisers have been concerned that over-the counter versions of statins could not be used safely, that some patients who did not need the drugs would take them.

I’d be worried about that too.  It’s much better to have doctors prescribe cholesterol-lowering drugs to people who don’t need them.

Since high cholesterol is a symptomless condition, consumers would not know whether the drug was working without having their cholesterol checked periodically.

Don’t be silly … of course consumers will know if the Lipitor is working.  They’ll wake up in the morning and say, “Holy crap, my muscles and joints are killing me!  It must be the … the … Honey, what’s the name of that stuff I’ve been taking?”

MSN Health is, in my opinion, one of the worst offenders when it comes to handing out lousy dietary advice.  Here are a couple of gems from a recent online article titled Get a Grip! 9 easy ways to help lower your cholesterol right now:

Even Ancel Keys, the Grand Poopah of Lipophobes, admitted that dietary cholesterol has no effect on the cholesterol level if your blood.  As for saturated fat, yes, it will raise your cholesterol … specifically, your HDL and your large, fluffy LDL.  Those are both beneficial.

9. Check for tropical oils. Lots of products are now “trans-fat free” but in some cases, these fats are being replaced with saturated fats, such as palm and coconut oils. You may have heard that palm and coconut oils do not negatively affect cholesterol levels, but the research isn’t conclusive and palm kernel oil contains 80 percent saturated fat. Instead, look for products that use polyunsaturated and monounsaturated fats, which help lower LDL cholesterol.

Hey, now there’s a technique all the bad scientists can applaud:  if a study doesn’t show what you want it to show, simply label the results as “inconclusive.”  I’ve got news for you:  if palm kernel oil and coconut oil did raise cholesterol, the results of those studies would be conclusive.

At least someone who spends a lot of time in her underwear knows not to fear coconut oil. 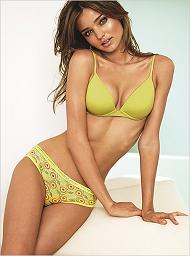 When a Victoria’s Secret runway model confesses her beauty secret, women will undoubtedly listen. Coconut oil is the new buzz in the beauty world, and now it’s been revealed that supermodel Miranda Kerr swears by it. She says that her shiny hair, perfect skin, and svelte body are the results of healthy living and daily use of this good oil.

Miranda Kerr, who famously bounced back to her pre-baby body just weeks after giving birth to her first child with actor Orlando Bloom, confesses in Daily Mail that her beauty secret is coconut oil. The supermodel says she dilutes the oil either in green tea or drizzles it over salads to keep her glowing. “I’ve been drinking it since I was 14 and it’s the one thing I can’t live without,” she tells Daily Mail.

For everyday beauty, coconut oil can be used as an all-over moisturizer, hair conditioner, and as a gentle eye make-up remover.

We’ll just pause here for a moment so the men in the audience can enjoy the idea of a Victoria’s Secret model using coconut oil as an all-over moisturizer.

US experts yesterday warned against consuming large amounts of coconut oil after Australian supermodel Miranda Kerr said the high-fat oil was the key to her clear skin, shiny hair and trim figure.

The World Health Organization has also warned the oil could contribute to an increased risk of coronary heart disease if taken to excess.

Keith Ayoob, director of the nutrition clinic at the Children’s Evaluation and Rehabilitation Center at the Albert Einstein College of Medicine, said the oil will not give you the body of a supermodel.

It won’t?  Rats!  I’ve been sitting here spreading coconut oil all over myself hoping to look good in a bikini next summer.

“I can’t say I’d want people consuming lots of coconut oil. You should use it sparingly,” Ayoob said.  “You want to cut back on saturated fats in your diet. I don’t know what benefit it would have for weight management because it has just as many calories as any other fat.”

Well, allow me to explain to you, Ayoob the Boob:  the type of fat in coconut oil –- medium-chain triglycerides —  is actually difficult to store in your adipose tissue, so you tend to burn it off instead.  It’s also good for your mood and helps curb your appetite.

Kerr’s dose of four tablespoons a day adds up to about 460 calories, which Ayoob said was too much saturated fat for most people. “She’s getting two and a half times the amount of saturated fat I would recommend for a person consuming 2,000 calories per day,” he said.

Ah, well, if you don’t recommend saturated fat, that proves it’s bad for us.  Sorry I didn’t recognize the logic in that sooner.  I must’ve been distracted by the Ayoobs.

194 thoughts on “This Is What We’re Up Against, Part Five”