When people who follow your blog start emailing to make sure you’re still alive, it’s time to explain the extended absence.

Fall is a busy time for most people, but especially for our family. Starting in mid-October, we have Chareva’s birthday, Halloween, Sara’s birthday, my birthday, Thanksgiving and then Christmas. I didn’t feel like carving out time to write new posts. I did, however, think long and hard about my future and the future of this blog, especially after I took my end-of-year vacation from the programming job and had plenty of downtime.

I’ll spoil the ending now: this will probably be my last post – if not for good, then for a good long while. That decision, of course, deserves a long explanation.

For more than a decade, I’ve been working the equivalent of two jobs: the programming job to pay the bills, plus the second job of producing a film, several speeches, a thousand blog posts, a book, a handful of videos, then another film, including all the music and all the animation … oh, and I’ve also coded and released three updates to a software system I sell to intellectual-property attorneys. I’ve always had a Big Project! in the works, usually with the next Big Project! already lined up.

A longtime reader checked in recently to ask if I’d croaked or anything like that, so I told her about my decision. Although she was disappointed, she put it perfectly: you simply can’t keep the accelerator floored forever.

Yup … and I’ve had the accelerator floored for a long, long time. 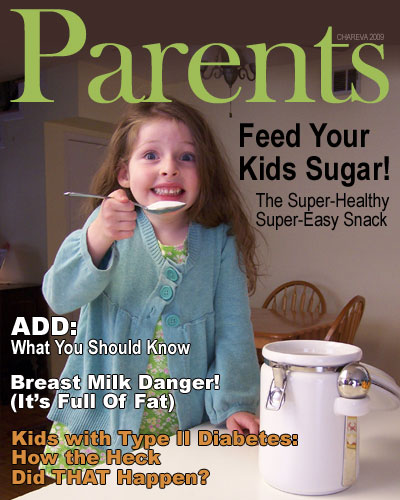 When Fat Head was released, our daughter Sara was a little pipsqueak in kindergarten. That’s her above in a mock magazine cover from an early post. Our daughter Alana was an even littler pipsqueak in preschool. Sara leaves for college in less than a year, then Alana two years after that. When we bought this property in 2011, I took what I thought would be a short-term programming job (the original contract was for six months) to help pay for renovations. In just over four years, I’ll be retiring from that job, complete with a 401k package and a hearty handshake (assuming we’re not still under “temporary” social-distancing mandates). I’m very aware of how quickly the time is passing.

After my dad’s mother died, he told me, “When both your parents are gone, you feel this little tap on your shoulder that says You’re next.” I responded with something like, “Oh come on, Dad, you probably have 30 more years ahead of you.”

Turns out Dad knew what he was talking about (as was usually the case). When my mom died in April, I didn’t feel that tap on the shoulder immediately, but eventually it was there:

I’m healthier than most 62-year-old guys, and my energy level is still good. I probably have at least 30 more years ahead of me. But I understand now what my dad was saying. You’re next doesn’t mean you’re on death’s doorstep. It means you hear the clock ticking. It means you actually feel that your time on earth is limited, as opposed to merely understanding it intellectually.

If that sounds depressing, it isn’t, at least not for me. I’d say it’s more clarifying.

Tap-tap-tap … Hey, Buddy, you don’t exactly have your whole life ahead of you anymore. Are you spending your remaining time doing things you no longer enjoy? Are there things you always wanted to do but haven’t done yet? If so, you’d better get to it.

If you’ve heard me answer the What prompted you to make Fat Head? question as a podcast guest, you know I didn’t plan to make a career of it. What eventually became Fat Head began as an idea for a series I wanted to pitch titled In Defense of Common Sense: a common-sense guy takes a humorous look at issues of the day. I figured if the pitch didn’t take, I’d move on to other projects. After all, I have a lot of interests.

Then Fat Head took on a life of its own. After learning just how friggin’ awful and damaging our government’s dietary advice has been, I decided Fat Head needed to be a full-length documentary, not a sample episode for a series. The arterycloggingsaturatedfat! and hearthealthywholegrains! nonsense was so pervasive in the media, I felt a need to keep hammering away on it, so I started the blog. I had that fire-in-the-belly passion to spread a message: Folks, you’ve been lied to! Meat, eggs and butter aren’t bad for you! Grains and vegetable oils aren’t health foods! Following the standard advice won’t make you healthy, but it will make Big Ag and Big Pharma rich.

I knew I’d actually made a small dent after Fat Head was shown on a cable network in New Zealand and I started receiving email messages like: We watched your doco last night and were gobsmacked! (I had to go look up the definition of gobsmacked to make sure I hadn’t hurt anyone and no lawsuits were forthcoming.) Then I received similar email messages from viewers in Israel, France and South Africa.

Once Fat Head went to Netflix and found a large audience, I started receiving all those lovely emails from viewers, thanking me for making the film and telling me that after watching it, they were finally able to lose weight and become healthy after years of frustration. Next thing I knew, people were getting in touch and asking me to give speeches or appear on their podcast shows.

I hadn’t anticipated any of this. It felt a bit like hopping on a bus for what I thought would be a short ride across town, then realizing I’d inadvertently taken a long ride to a different country and being pleasantly surprised by the people and the surroundings. Call it an attitude of Go With The Flow, or Things Happen For A Reason or whatever, but I had a strong feeling of This is where I’m supposed to be now, planned or not.

Fast-forward to late 2020: that feeling has faded. It’s been fading for some time.  Whatever purpose I served with this blog, I feel I’ve already served it. Over the years, several podcasters asked me the same question: What can we do to get the USDA and other government agencies to change their lousy advice? I always gave the same answer: That’s not my goal, because The Anointed never, ever admit they were wrong. My goal is to convince people to ignore them.

Mission accomplished. Thanks to a small army of bloggers, authors, podcasters, filmmakers and YouTubers, people are no longer gobsmacked to learn that arterycloggingsaturatedfat! and hearthealthywholegrains! are nonsense. As I noted in one of my speeches, a recent survey showed that nearly three-quarters of Americans no longer believe our government’s dietary recommendations are good for them. Big Pharma is complaining that people don’t take their prescribed statins. Full-fat dairy products are out-selling low-fat products again.

When I started the blog 12 years ago, relatively few people had heard of low-carb, ketogenic or paleo diets. Now our local Kroger sells low-carb dinners, grain-free pastas, and ketogenic ice cream. Riced cauliflower is in the freezer section, not far from the gluten-free breads and pizza crusts. Magazines on display near the checkout counters promise Delicious Ketogenic Meal Recipes! on their covers. Before coronahysteria closed the office, I’d sit in the employee cafeteria and hear my young co-workers discussing which meals they were eating on their ketogenic or paleo diets.

I don’t receive those Your film saved my life! emails anymore because pretty much everyone has heard of low-carb/keto/paleo diets and either made the switch or decided not to. I don’t have that fire-in-the-belly passion to keep fighting a battle that’s largely been won. It’s time to move on.

To what? Honestly, I don’t know, and that’s more than a little unusual for me. Like a lot of people (men in particular, in my opinion), I’ve tended to define myself by my accomplishments. That’s part of the reason I’ve always had the next Big Project! in mind. I was never satisfied to just put in my days at the programming job and then go watch TV until bedtime. I always needed a goal to pursue – preferably something difficult. I kept the accelerator floored … although if you’re a long-time reader, you know my engine has been sputtering lately.

Now my foot’s off the pedal. During this end-of-the-year break, I’ve done next to nothing. (I don’t consider getting through half of my “to watch” list on Netflix an accomplishment.) For one of the few times in my adult life, I don’t know what the next Big Project! will be. The surprise to me is that I’m totally okay with that, probably because I know it will be temporary. I’ve always been blessed with an abundance of creative energy, and sooner or later, it will want to go somewhere. I don’t know where it will want to go, but I believe it needs to go somewhere new.

As the saying goes, sometimes one door has to close before another opens. So after spending a lot of time thinking about it, I’ve decided this is the door I need to close. When that next door opens, I’ll know. I’ll feel it.

It’s even possible that after a good long break, I’ll want to fire up this blog again, although I wouldn’t bet on it. The Fat Head Facebook group will remain up and running, but as you know if you’re a member, I spend very little time there. I’m still active on Twitter (@TomDNaughton), and will be until Twitter’s woke-company censorship becomes more than I can stand. But my days as a diet-and-health blogger are almost certainly over.

To those of you who’ve been companions on this journey – for all of it or part of it – you have my eternal gratitude. Without all the back-and-forth in comments, the blog wouldn’t have meant a thing. I’ve always been impressed by the intelligence and knowledge of our regular readers, and I’ve learned way more from all of you than you ever learned from me. You helped to make it one heck of an interesting ride.

I wish you all a happy, healthy and prosperous future … and thanks for the memories.