I still want to know, but we’re hoping it’s a moot point, at least for now.  Two suspects in the Chicken Mass Murder of 2019 are now gone.

We spent Thursday through Saturday in Atlanta to take a tour of Georgia Tech, which is high on Sara’s list of possible choices for college. Chareva’s younger brother took care of the chickens while we were gone and reported three more dead. Damnit.

In case you’re wondering, yes, I have a trail cam.  I set it facing the chicken yard earlier last week, but apparently didn’t set it for night vision. All the pictures were of the chickens enjoying the daylight.

We returned from our Atlanta trip early Saturday evening.  We found this critter in the trap I’d set: 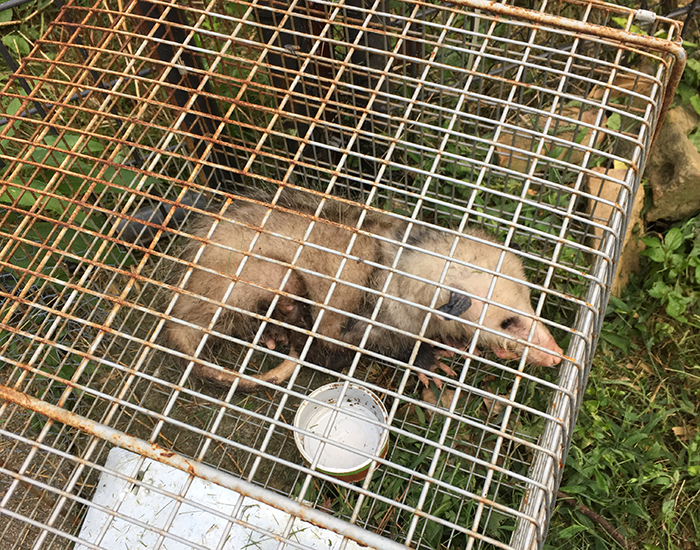 Yes, possums kill chickens, but I had my doubts this was our predator. I’d set the trap almost every night for more than a week. Whatever was killing the chickens wasn’t interested in the bait. Seemed a bit unlikely a chicken-killer would suddenly develop a change in dinner preferences. Of course, I sent the possum to possum heaven just in case.

My suspicions that the predator was still at large were confirmed when Chareva found another dead chicken this morning. I uttered a string of ancient curses known only to small-time farmers and looked up how to set the night vision on the trail cam.

This afternoon, Chareva and the girls went out for a bit of shopping and other errands. When they came home, Alana ran upstairs to inform me they’d spotted a raccoon hiding under my car. Yikes. If a raccoon is out and about during daylight hours, there’s a strong possibility it has rabies.

I grabbed my trusty Ruger, went outside and squatted down on the driveway, drawing a bead on the raccoon’s head and making sure I wasn’t at an angle where I’d hit a back tire if I missed. Chareva flipped open an upstairs window and suggested that shooting anything under my car was asking for trouble … like, say, a ricochet that hits a pipe. (Those weren’t her exact words, but you get the idea. The word dumbass was definitely not used as far as I recall.) She offered to drive the car forward to expose the raccoon.

And run he did. As soon as his cover moved away, he took off. Fortunately, he ran directly away from me, so I didn’t have to swing the rifle side to side. I put the red dot from my scope on his butt and hit him with the first shot.

He ran into some underbrush, but I figured he was making a beeline for the forest and correctly guessed he was about to run up against a fence. I hustled over there and saw he was already struggling to climb the fence. I put him out of his misery.

So Rocky Racoon IX may have been our chicken-killer. But I’m putting the trail cam out tonight anyway. If we lose any more chickens, I’d sure as heck like to identify the killer.

24 thoughts on “The Farm Report: The Chicken-Killer Is Gone … We Hope”