When we released the printed book back in 2017, I thought we’d have a Kindle version ready fairly soon. Nope. I was quite focused on getting the film version done, so Chareva’s time was taken up with creating illustrations I could animate in After Effects.

When she did turn her attention to creating a Kindle version, it was more work than either of us anticipated. When creating the printed version in Adobe InDesign, she designed quite a few two-page spreads. She also created graphics specifically to wrap text around them.

A Kindle doesn’t know what a two-page spread is. And while it’s theoretically possible to wrap text around an image, we discovered it doesn’t work so well in practice. People can change both the font and the font size on their Kindle readers – not to mention choose to view pages vertically or horizontally – which makes the placement of a wraparound graphic relative to the text unpredictable.

Consequently, Chareva had the privilege of laying out the book in Adobe InDesign all over again, pretty much from scratch. She had to take the graphics from her two-page spreads and break them up or otherwise redesign them to work as in-line graphics. 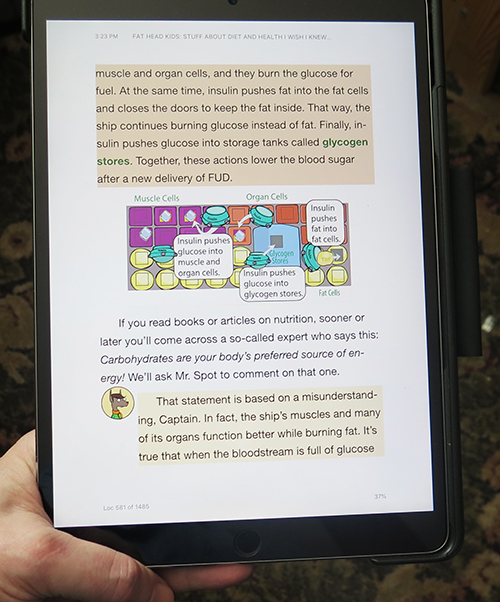 I may be biased, but I went through the book using my iPad’s Kindle Reader, and I think she did a terrific job of re-creating the feel of the printed version within the limitations a Kindle imposes on the layout.

We’ve heard the printed version is difficult to come by in some countries because of shipping costs or other restrictions. I believe the Kindle version will be close to the equivalent of $9.99 U.S. pretty much everywhere – with no shipping costs, of course.

If you haven’t picked up the book yet, consider giving the Kindle version a look.