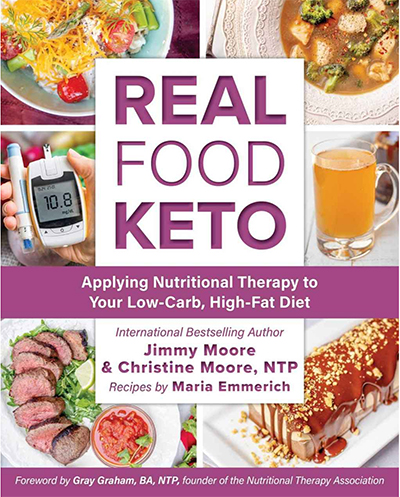 I spent a chunk of my end-of-the-year vacation watching football and nipping at the bottle of single-malt whiskey I received as a gift. Fortunately, I also found time to catch up on some reading, which means I finally had a chance to finish Jimmy Moore’s latest offering, Real Food Keto. I’ll start with the brief review:

Now for the longer review.

When I read a book about diet and health, one of the criteria for evaluating it is my “Aunt Martha” test, meaning your Aunt Martha could understand it without reaching for a medical dictionary. Jimmy’s a talented writer who’s always had the knack for putting the science in layman’s terms. As you may recall, Chareva’s second-cousin, a neurologist, recommended Keto Clarity to Chareva’s father and specifically said he liked how well it explains the concepts to a lay audience. (He didn’t know Jimmy and I are friends when he said that. I then surprised the heck out of him by calling Jimmy on Facetime so the doctor could pass along the compliment himself.)

I’ve recommended diet and health books that are well written, that definitely pass the Aunt Martha test, but didn’t tell me much I didn’t already know. That’s because my bookshelf is full of diet and health books, and I end up reading about essentially the same concepts multiple times.

Real Food Keto, on the other hand, contains a ton of information that was new to me. I’m pretty sure that’s because of Jimmy’s co-author this time around: Christine Moore, who happens to be his wife.

Last year, Christine completed the Nutritional Therapy Practitioner (NTP) course, which is offered by the Nutritional Therapy Association. Their philosophy is very much in line with Weston A. Price principles. In fact, Dr. Price’s classic book Nutrition and Physical Degeneration is at the top of a rather long list of required reading for NTP students. As Jimmy himself has said, since completing the coursework, Christine now tells him things about diet and health he didn’t already know. (I think all wives should occasionally tell their husband things they don’t already know.)

Jimmy has told his personal story on his blog and in his previous books. Far fewer people are familiar with Christine’s personal story, which she relates in the introduction. The brief version is that she was born three months premature and has been battling the effects most of her life. You’ve heard the saying genetics loads the gun, but the diet pulls the trigger. In Christine’s case, it’s more like extremely premature birth loaded the gun and pulled the trigger, and then a bad diet pulled the trigger again and again.

She’s been blind in her left eye since birth. The vision in her right eye grew steadily worse over the years. (When Jimmy asked to marry her, he was warned she’d be totally blind by age 35. He married her anyway.) She’s had issues with her joints, her spine, her moods, her hormones and her immune system, to name just a few.

The good news is that after getting off a low-fat, high-sugar, fake-food diet and switching to a ketogenic diet, Christine’s health problems began to improve. After completing her NTP courses and focusing on a real-food, nutrient-dense diet, they improved even more. For decades, her remaining eyesight grew steadily worse. Now it’s actually getting better.  Dr. Price would be proud.

I’m a big believer in the value of experience. Yes, someone is naturally lean and athletic can certainly acquire the knowledge to teach others about weight loss. But I like hearing from someone who’s lost 100 pounds and kept it off – even if you can’t see his abs. Someone who has been generally healthy since birth can certainly acquire the knowledge to teach others about diet and health. But in Real Food Keto, we’re hearing from a co-author who has had to deal with far worse health problems than most of us ever experience. Learning about nutrition at a deep level was a big part of overcoming those problems. Sharing what she’s learned is now a passion for Christine. As she writes near the end of the introduction section:

With all that I’ve gone through with my health and coming out the other side many years older, wiser, and healed, I knew I wanted to do something to help others on their journeys to optimizing their health.

Because it’s called Real Food Keto and not just Real Food, the opening chapters are of course about the ketogenic diet, with an emphasis on tailoring it for your individual needs. As you’d expect, there are explanations of what ketosis means, the benefits of ketosis, how to get into a ketogenic state, and the various ways to measure ketones.

But throughout these chapters (throughout the whole book, actually) the pound-it-home message is that to be healthy, we need proper nutrients, not just a proper ratio of macronutrients. To underscore that message early on, there’s a section titled Two Major Pioneers In Nutrition describing the works of Dr. Weston A. Price and Dr. Frances Pottenger.

So yes, the book promotes a ketogenic diet, but it’s a nutrient-dense ketogenic diet. Among the many suggestions are: eating a variety of foods, eating seasonally, buying foods from farmers’ markets, eating some vegetables raw, including some fermented foods in the diet, using natural salts, and switching to raw dairy products if possible.

There are in-depth chapters on protein, carbohydrates and fats that describe how all three are used in the body. Since it’s a keto book, there are explanations of why saturated fats won’t kill you and why “vegetable” oils (most of which are actually seeds oils) aren’t good for your heart or the rest of your body.

But there’s also a chapter titled Water: The Fourth Macronutrient that I found particularly interesting. I’ve been making a mental note to drink more water since reading it. Here are a couple of quotes:

We’ve already discussed quite a few nutrient deficiencies in this book, but, by far, the most common nutritional deficiency in the United States is good old H2O. By the time you feel the first tinge of thirst, the process of dehydration has already begun. When the amount of water in your body is off by even a little, it directly affects the minerals and electrolytes that keep your body in tiptop shape.

Water is and always will be the most important nutrient you can get. Eat all the high-fat, moderate-protein, low-carb food you want, but if your water intake is off by even a little, it can lead to some serious health issues. Our bodies were made to be nourished by water, and the reasons for and benefits of getting just the right intake of water are plentiful.

The book then describes the many benefits of water, and how becoming dehydrated can affect everything from your endocrine system to your immune system.

Like I said, this book contains a lot of information I didn’t already know. For reasons I’ve explained in previous blog posts, I don’t measure ketones or aim for ketosis. So while the chapters on ketogenic dieting are well written, they don’t apply to me personally. Starting with the chapter on water, however, pretty much everything in the rest of the book applies to anyone interested in being healthy. I suspect I’ll be pulling Real Food Keto off the bookshelf regularly as a reference.

There are two chapters on minerals and vitamins. Both follow the same basic pattern: for each mineral or vitamin, there’s an explanation of its function in the body, a list of the symptoms of insufficiency, and a list of which foods are rich in the mineral or vitamin. There are also suggestions on which tests you may want to request from a health provider and which supplements to consider.

The next chapter is an in-depth look at digestion, which includes sections on stomach acid (in which we learn that nine out of ten people these days don’t produce enough of it), leaky gut and the gut microbiome. As you might guess, there are explanations of how the processed garbage that passes for food these days screws up the digestive process. Since this is book about real food, there’s also a section describing which foods help to heal digestive problems. Apple cider vinegar, for example, helps to stimulate the production of stomach acid. (I now have a bottle of apple cider vinegar in the kitchen and have taken to drizzling it on some foods.)

There’s a chapter on blood sugar and why pretty much everything having to do with health goes haywire when blood sugar is chronically high. Naturally, the book suggests adopting a ketogenic diet to control blood sugar. The final two chapters are on the endocrine system (with a very good section on adrenal fatigue) and detoxification.

As a bonus (a big bonus), there are about 80 pages of keto-friendly, real-food recipes at the back of the book provided by Maria Emmerich, who has written quite a few keto cookbooks. Search for her name on Amazon and you’ll see the whole collection.

I’ve read several of Jimmy’s books, and this was my favorite. Perhaps that’s because I’m not as interested in ketogenic dieting or fasting as some people, but I suspect it’s because of the Nutritional Therapy Practitioner knowledge Christine brought to the table for this one. Either way, if you’re interested in real food and real health, this is one to add to your library.