In the speech I recently gave at the Weston A. Price Foundation’s annual conference, I mentioned some ideas from Nassim Nicholas Taleb’s excellent book Antifragile. The type of person Thomas Sowell calls The Anointed in his book The Vision of The Anointed, Taleb refers to as The Intellectual Yet Idiot. In Antifragile, Taleb explains why the IYI types create fragile systems — that is, systems that tend to break or completely blow up under pressure.

To quote from my speech:

Another reason the intellectual yet idiot types tend to create fragile systems, they place too much value on academic theories and not enough value on practical experience. And that’s because they think knowledge works like this: Ivy League researchers discover scientific principles, and then those principles are put into practical use. In other words, Harvard professors discover and publish the laws of aerodynamics, and then birds begin to fly. 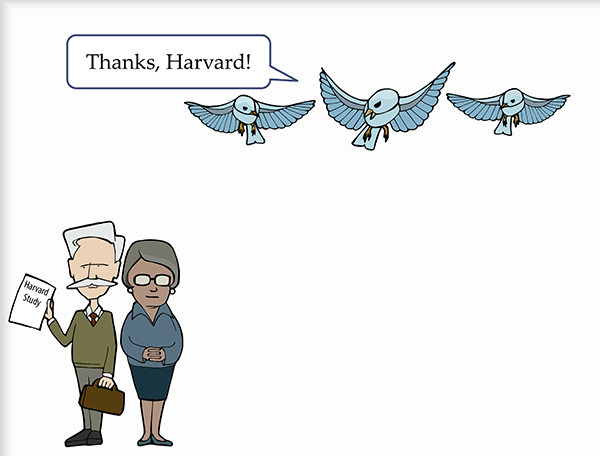 But of course, that’s not what happens in the real world. In the real world, human beings learn WHAT works through experience. And eventually the university researchers come along and explain WHY it works. But we don’t have to know why something works to know that it works. Or as Taleb writes, theories come and go; experience stays.

In Antifragile, Taleb explains that the inventor of the jet engine, to name just one example, did not understand why it worked. But he knew that it worked. Many of the technologies we now take for granted were invented by people who could not explain (because they didn’t know) the physics or chemistry of why their inventions worked. But they worked. The inventors kept tinkering until they discovered what worked. In other words, they knew what worked through experience.

Earlier in the speech, I mentioned my high-school health teacher, who was also the wrestling coach. He told us if we wanted to lose weight, we should base our diets on meats, eggs and vegetables, stop drinking sodas, and stop eating foods like bread, cereal, pasta and french fries. How did he know this diet worked? Back to the speech:

He knew what worked from experience. Because part of his job was to help high school athletes get down to their competition weight, which he did.

I’m pretty sure the health teacher/wrestling coach didn’t spend a lot of time reading studies put out by the Harvard Nutrition Department. I never heard him explain that giving up sodas, bread, cereal, pasta, etc., induced weight loss by lowering insulin or altering the composition of the gut bacteria or whatever. I suspect he didn’t care all that much WHY the diet worked. He knew that it did. I also suspect if a PhD had waved a study in his face and told him academic research has concluded that the diet doesn’t actually work, the PhD would have learned about the effectiveness of a few wrestling moves the hard way.

It’s great to understand WHY something works. But as Taleb explains in Antifragile, it’s more important to know WHAT works – and we learn what works through experience. That’s what the Wisdom of Crowds is based on: experience.

As if he wanted to provide material for this post, a disciple of the Church of the Holy Plant-Based Diet tried to convince me today (on Twitter, naturally) that eating meat will ruin my health and shorten my lifespan. And of course, he kept linking to cherry-picked studies. Yeah, good luck with that. For one thing, the studies were the same old observational nonsense. But even if the studies were well designed, I frankly wouldn’t care.

Why not? Because I was a vegetarian for several years, and yet I somehow didn’t experience the magic benefits promised by the disciples of the Church of the Holy Plant-Based Diet. I gained weight and my health declined. When I switched to a low-carb diet heavy on meats and eggs, I lost weight and my health improved. That’s my experience.

Strangely, it doesn’t seem to matter to the disciples of the Church of the Holy Plant-Based Diet when I recount that experience. They just keep sending links to more cherry-picked studies. Apparently, they’re convinced I’ll finally read one of those studies and say to myself, Well shoot, I guess I was healthier when I was a vegetarian!

Newsflash: telling someone No, you didn’t experience what you think you experienced isn’t exactly a convincing argument.

Vegetarian zealots aren’t the only ones, of course. I’ve had similar go-rounds with the “it’s all about the calories” crowd. I’ve mentioned on the blog a few times that when I eat like a king but ditch the carbs, I don’t gain weight. Each year that I go on the low-carb cruise, I weigh myself before I leave. During the cruise, I eat big meals of eggs, bacon, sausage, chicken, steak, prime rib, lobster, shrimp, a cheese plate for dessert, etc. (I also eat green vegetables and drink red wine to keep my colors balanced.)

Each year, I weigh myself again when I get home. I’ve never gained a pound on the cruise.

Sure, I’ll read that study. I read a lot of studies. I have a database full of them. But for one thing, there’s a difference between not gaining weight and losing weight. For another, I’m not going to dismiss my own experience because someone sends me a study.

The only problem with that explanation is that I have a brain and it works pretty well. I’m quite capable of determining when I’m eating more than I do at home. When I have eggs and bacon and sausage for breakfast, a big plate of meats and greens for lunch, and a dinner that includes a shrimp cocktail, two lobster tails dipped in butter, a 12-ounce prime rib, and a cheese plate for dessert (washed down with two glasses of red wine), I am definitely consuming more calories than usual. And yet I don’t gain weight.

So why not? Truth is, I don’t know. In fact, I’ve asked both a doctor who recommends low-carb diets to patients and a PhD who’s published studies on low-carb diets. I got the same answer from both of them: We don’t know why some people can stuff themselves with meats and eggs without gaining weight, but we know it happens.

We can speculate, of course: not enough insulin to store the fat, extra protein raising thermogenesis, food passing through and not being absorbed, something to do with gut bacteria, or whatever. Again, it would be nice to know. But we’re back to what Taleb wrote. Humans learn what works through experience. Later, the university researchers come along and explain why it works. But we don’t have to know why something works to know that it works. Theories come and go, but experience stays.

That’s why I’m more likely to listen to doctors like Mike and Mary Dan Eades than to an academic researcher at Harvard. Sure, Drs. Eades and Eades read a lot of studies. They’re fluent in the science. But more importantly, they’ve treated thousands of patients and seen the results. If they tell me their patients lost weight more easily on a low-carb diet, that’s experience talking. I don’t particularly care if they can explain exactly why it happens.

Thomas Sowell made points similar to Taleb’s in his book Intellectuals and Society. The Anointed are mostly intellectuals who fall in love with exciting new theories. The difference between them and equally intelligent people who aren’t intellectuals is that the non-intellectuals are judged by results, not by the eloquence of their theories. If an engineer designs a bridge based on his own bold new theory and the bridge falls down, his career is over. If an intellectual proposes a bold new idea that dazzles other intellectuals but turns out to be completely wrong, he’ll probably just end up with a column in the New York Times.

Taleb echoes that idea in his most recent book Skin in the Game.  The Romans were such believers in having skin in the game, an engineer who designed a bridge was required to live beneath it for a time.  Having skin in the game — meaning failure affects you personally — will quickly convince you to care more about results than theories.

None of these people discovered the correct diet by reading studies put out by Harvard or the American Heart Association.  They had skin in the game.  The results mattered to them personally.  So they tinkered. They tried different approaches. They learned what works through experience.  And having learned what works, they don’t care if some idiot on Twitter or some Intellectual Yet Idiot at Harvard tries to convince them it actually doesn’t work.

As I said in the speech, The Anointed seem to believe they’re going to regain control of the conversation about diet and health by producing more studies. The American Heart Association and other organizations populated by Intellectual Yet Idiot types will no doubt keep publishing studies telling us that saturated fat is bad, grains are good, etc., etc.

Their strategy is going to fail. Millions of us have learned what works and what doesn’t through experience. We’ve done nearly the opposite of what they recommend and lost weight, gained energy, waved goodbye to chronic ailments, and improved our health markers. That’s the experience.  And ultimately, that’s all that really matters.

38 thoughts on “The Anointed, The Experts, And Knowledge … Part Three”