I’d planned to write a post on expertise and experience, but we’ll wait on that one. Someone left a comment on the previous post that deserves a post of its own: The death of expertise was brought to us by experts.

The author of The Death of Expertise wasn’t writing about nutrition policy, and like I said, the essay makes some good points. I get as frustrated as anyone when people who obviously don’t know diddly about a topic nonetheless have loud opinions.

But when it comes to diet and health, the death of expertise was brought to us by experts is spot-on. As Nassim Nicholas Taleb wrote in his essay The Intellectual Yet Idiot, the “experts” have been so spectacularly wrong, people are entitled to rely on their own ancestral instincts or listen to their grandmothers, who have a better track record than “these policy-making goons.” 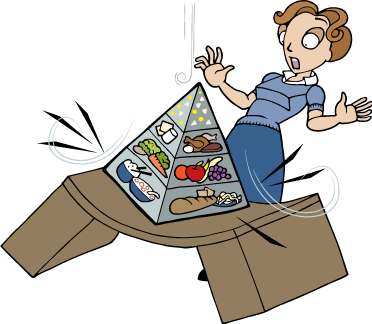 Let’s start with our pals at the USDA. As Denise Minger wrote in her excellent book Death By Food Pyramid, the people who eventually created the Dietary Guidelines not only ignored science, they ignored guidelines drafted by their own science advisor, a woman named Luise Light.  Her original guidelines actually made sense:

The guide kept sugar well below 10 percent of total calories and strictly limited refined carbohydrates, with white-flour products like crackers, bagels, and bread rolls shoved into the guide’s no-bueno zone alongside candy and junk food. And the kicker: grains were pruned down to a maximum of two to three servings per day, always in whole form.

As Minger recounts, when Light received the (ahem) edited version of her guidelines back from the USDA, they were a grain-promoting perversion of what she’d originally submitted. Horrified, Light explained that “no one needs that much bread and cereal in a day unless they are longshoremen or football players” and warned that the six-to-eleven servings of grain per day recommended by the USDA could spark epidemics of obesity and diabetes.

Epidemics of obesity and diabetes … hmmm.  Like she had a crystal ball.

Many of us have experienced not just weight loss, but big improvements in health after ditching the grains the USDA told us should be the base of our diets. Why on earth would we ever bow before their “expertise” after that?

Moving on to our pals at the American Heart Association … these people still tell us not to eat foods like cheese and butter, despite all the evidence that they’re flat-out wrong. Here’s just one example of that evidence: a study published by the American Journal of Clinical Nutrition in which researchers directly measured biomarkers of dairy fat consumption – no guessing by using food-recall surveys.  The researchers knew who was consuming dairy fat and how much. Then they compared dairy-fat consumption to cardiovascular disease.

The result? We’ll quote from an article put out by the University of Texas:

The study … found no significant link between dairy fats and cause of death or, more specifically, heart disease and stroke – two of the country’s biggest killers often associated with a diet high in saturated fat. In fact, certain types of dairy fat may help guard against having a severe stroke, the researchers reported.

That study was reported in quite a few media outlets. There have been other studies like it, with similar results. It doesn’t take a degree in biochemistry to understand them. So how did the American Heart Association respond? Did they tell us they got it wrong and we can go back to eating butter now? Of course not. Their web site still instructs us to switch to “healthy” fats like … wait for it … CORN OIL!

Corn oil has been tested in clinical studies, for @#$% sake! Here’s a quote from a study conducted in the 1960s titled Corn Oil in Treatment of Ischaemic Heart Disease:

The patients receiving the key treatment (corn oil) fared worse than those in the other two groups: two years from the start of treatment infarction or death had occurred in one- quarter more of the corn-oil than of the control group… It is concluded that under the circumstances of this trial corn oil cannot be recommended as a treatment of ischaemic heart disease. It is most unlikely to be beneficial, and it is possibly harmful.

When actual clinical research tells me that corn oil isn’t beneficial and possibly harmful, I have every right to conclude that the “experts” telling me to switch from butter to corn oil are morons. I don’t care how many letters the experts can put after their names.

The American Heart Association tells us to switch to vegetable oils because they lower LDL. Back in 2010, I wrote a post showing that according to data I found on the AHA’s own web site, people with “high” LDL don’t have more heart attacks than people with “low” LDL.

The American Heart Association tells us to avoid animal fats because they raise cholesterol, and by gosh, everyone knows you have to lower your cholesterol to avoid a heart attack. Here’s the conclusion from a study titled Serum Cholesterol and Atherosclerosis in Man, in which researchers compared known cholesterol levels with plaque buildup in 200 bodies that were autopsied:

No correlation could be observed between the serum cholesterol level and the amount and severity of atherosclerosis in the arteries.

The kicker? That study was published in Circulation, which is published by … wait for it … The American Heart Association.

Gee, I don’t how that could have happened. 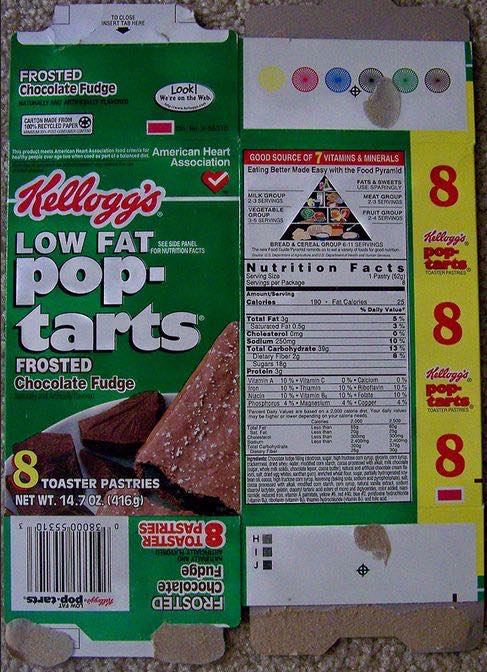 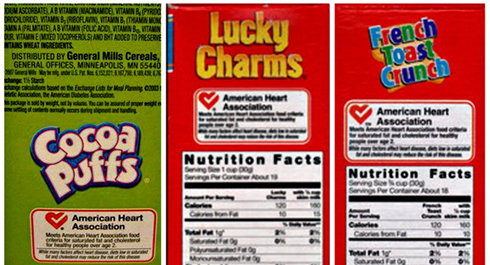 Sacks was on the AHA’s dietary advisory committee when Cocoa Puffs and Lucky Charms were labeled as heart-healthy foods. I looked it up.

When “experts” put their seal of approval on boxes of sugar-covered grains, then later tell us giving up bacon and eggs didn’t reduce heart disease because people ate more sugar, we have every right to conclude that they’re morons.  Or as Curly Howard would put it, intelligent imbeciles.

We can say the same about the people who told us sugar doesn’t cause heart disease … especially when it turns out they were paid by the sugar industry. Yes, I’m talking about the geniuses at the Harvard Nutrition Department. As a reminder, here are some quotes from an article in The New York Times:

The internal sugar industry documents, recently discovered by a researcher at the University of California, San Francisco, and published Monday in JAMA Internal Medicine, suggest that five decades of research into the role of nutrition and heart disease, including many of today’s dietary recommendations, may have been largely shaped by the sugar industry.

The documents show that a trade group called the Sugar Research Foundation, known today as the Sugar Association, paid three Harvard scientists the equivalent of about $50,000 in today’s dollars to publish a 1967 review of research on sugar, fat and heart disease. The studies used in the review were handpicked by the sugar group, and the article, which was published in the prestigious New England Journal of Medicine, minimized the link between sugar and heart health and cast aspersions on the role of saturated fat.

Moving on to the experts at the American Diabetes Association, here are some exact quotes I clipped from their dietary recommendations online back in 2011:

Starchy foods raise your blood sugar, and the higher your blood sugar goes, the more insulin you need … so make sure you eat six to eight servings per day of bread, cereal, rice and pasta.  Do I even have to comment on the stupidity?

And of course, it’s recommendations from the AHA and ADA that prompted the expert dietitians who designed menus for hospitals to come up with “heart healthy” choices like these: 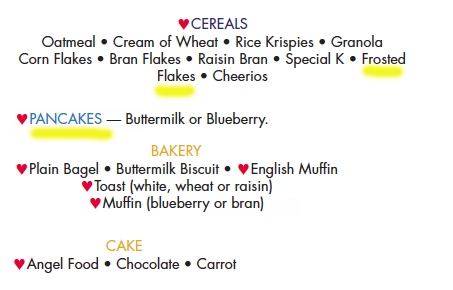 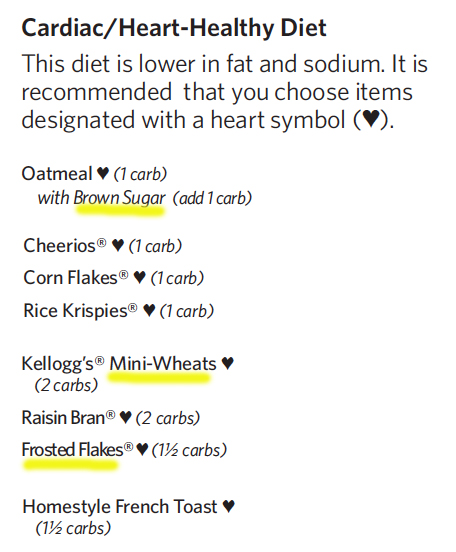 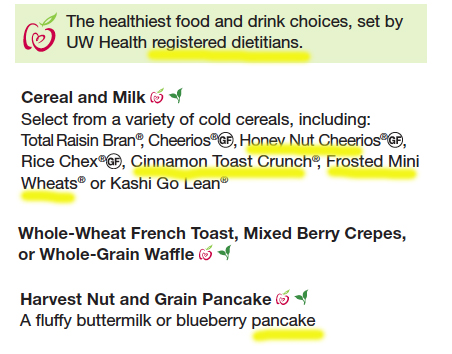 And finally, let’s move on to my buddy The Guy From CSPI.  He pushed anti-saturated-fat hysteria for years.  He demanded calorie counts on restaurant menus — a Grand Plan that required spending more of other people’s money.  There was no evidence that confronting restaurant patrons with calorie counts would change what they ordered.  In fact, studies have shown exactly what I predicted years ago: people order what they order, period, and calorie counts don’t make a difference.

Naturally, The Guy From CSPI had an explanation for why the Grand Plan failed:

Nutrition is not the top concern of low-income people, who are probably the least amenable to calorie labeling,” said Michael F. Jacobson, executive director of the Center for Science in the Public Interest.

In other words, the plan was good, but people didn’t follow it correctly because they’re stupid.  And of course, CSPI is still pushing for more calorie labels … on foods sold in grocery stores, movie theaters, convenience stores, vending machines, etc.

In other words, we need to do the same thing again, ONLY BIGGER.

But for a true sense of how wrong The Guy From CSPI has been, you can watch this:

I could go on and on with examples of how The Anointed have taken us down the wrong path on nutrition. Hell, I could write a decent-sized book and still not run out of examples.

But the “experts” in nutrition have been so wrong, so often, they’ve lost any right to demand our respect. Instead, they have our contempt. And they’ve earned it.

41 thoughts on “The Anointed, The Experts, And Knowledge … Part Two”