I’ve seen an argument about sugar and obesity going around the internet lately. The argument goes like this:

Sugar can’t be the main driver of obesity, because rates of obesity have continued to rise while sugar consumption has been going down.

That statement is based on data showing that our sugar consumption has dropped by around 15% over the last decade or two, depending on whose figures you use. Meanwhile, rates of obesity have continued to climb.

For the record, I don’t believe sugar is the only driver of obesity. I believe crappy oils have a lot to do with it, as Dr. Eades proposed in an excellent speech. I also believe refined grains share a chunk of the blame.

But that’s not the point of this post. The point is that sugar can’t be the driver of obesity because sugar consumption is going down while obesity is going up isn’t as logical as it first appears. In fact, it reminds me of one of the concepts from the book How Not to Be Wrong: The Power of Mathematical Thinking, which I’ve mentioned in a few posts.

In a chapter titled There Is No Such Thing As Public Opinion, author Jordan Ellenberg explains that if you confuse individuals with the aggregate, what’s perfectly logical can appear to be illogical.  He gives an example something like this:

So what happens if we start conducting polls? Based on the results, we’ll conclude that the voters are illogical doofuses. Ask “Should we cut federal spending?” and two-thirds (Cut Defense + Cut Social Programs) will answer yes.  Okay, got it.  Two-thirds of voters want us to tame the deficit through spending cuts.

We shake our heads at the results and think, Geez, the voters are clueless.  Two-thirds of them want to cut spending, but they don’t want to cut defense or social programs. Are they just morons?

Uh, no. We’ve fallen into the mental trap of confusing individuals with the aggregate. As Ellenberg writes:

Each voter has a perfectly rational, coherent political stance. But in the aggregate, the position is nonsensical.

We have a similar problem with if sugar consumption is going down while obesity is going up, sugar can’t be the main driver of obesity. Yes, it seems like a logical conclusion at first glance. But if we dig a little deeper, we see it’s another case of confusing individuals with the aggregate.

To actually prove something conclusive about the cause of obesity, the 15% decline in sugar consumption would have to occur more or less evenly across the population. In other words, sugar consumption is down by 15% because damned near everyone is now eating 15% less sugar. If that were true, it would mean individuals are cutting back on sugar but getting fatter. Case closed.

But I’ll bet you dollars to donuts (and you can keep the donuts) that’s not what happened with sugar consumption. Do you know anyone who decided sugar is bad and responded by eating 15% less of the stuff? I sure don’t.

“Honey, I just read this great article by Dr. Robert Lustig on how sugar is a metabolic poison. Pour off a few sips of my Coca-Cola and cut away 15% of my donut before you bring it to me, will you?”

The people I know who concluded that sugar is a health hazard responded by giving up sugar completely. Well, okay, maybe a few cookies and a slice of pumpkin pie at Christmas, but other than that, they don’t touch the stuff.

In the aggregate, sugar consumption has declined by 15%. But among individuals, many people are continuing to eat their donuts and Frosted Flakes and Little Debbie Snack Cakes washed down with Coca-Cola, while a minority of others have gone almost sugar-free. That’s what I see among co-workers at the office, among parents and children at school functions, etc.

With that in mind, let’s demonstrate how a population of individuals could experience a sugar-fueled rise in obesity even as sugar consumption declines across the same population. To keep things simple, I’ve created population of eight men who are all 5’10”, which means the BMI scale will label them as obese when they reach 210 pounds. Here’s our population in 2008, when all eight men are consuming around 100 pounds of sugar per year.  (I’m horrified to say that’s about average.) 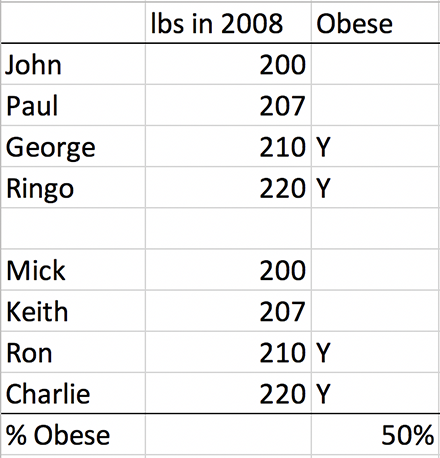 Goodness. We have an obesity rate of 50%. Now let’s jump ahead 10 years. John, Paul, George and Ringo have continued consuming around 100 pounds of sugar per year and have all gotten 10 pounds heavier. That’s not at all unusual. As I pointed out in Fat Head, the U.S. population gets a little older on average with each passing year, and people tend to gain weight over time if they don’t clean up their diets.

But during the same 10 years, Mick, Keith, Ron and Charlie heard about the health hazards of sugar and stopped eating the stuff. They all lost 10 pounds – nothing dramatic, but a nice change. Here’s what our population looks like in 2018: 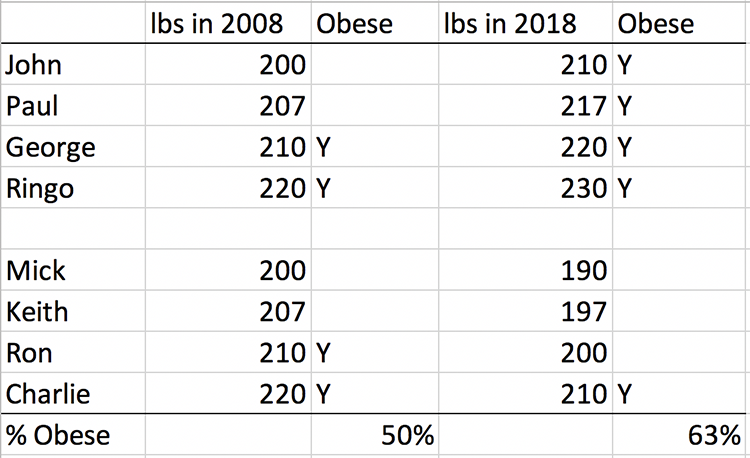 So if sugar is the driver of obesity, the obesity rate also had to decline, right? Wrong. Check the graphic. Our population-wide obesity rate rose from 50% to 63% … even though the average weight of our population (209.5 lbs.) is exactly the same in 2008 and 2018.

How is that possible? It seems completely illogical. Yes, but only if you’re looking at the population in the aggregate instead of what happened to the individuals.

At the individual level, the sugar-eaters gained weight and the sugar-avoiders lost weight – just 10 pounds in either direction over 10 years. Again, nothing dramatic. But those relatively small changes caused two people to go from not obese to obese, and one person to go from obese to not obese. The result is that despite a 50% drop in sugar consumption, our population became more obese in the aggregate.

Again, I’m not saying this proves sugar drives obesity. Maybe it does, maybe it doesn’t.  But sugar can’t drive obesity because obesity rates went up while sugar consumption went down isn’t the slam-dunk logical argument the people making it think it is. It could simply be that lots of people are still eating sugar and getting fatter as a result, while a much smaller group of people have dumped sugar completely and account for most of the decline in sugar consumption.  Keep in mind that many people who dumped sugar from their diets (Chareva being a perfect example) weren’t fat to begin with, which means they don’t affect the obesity figures either way.

We’re individuals, not aggregates. As Dr. Ellenberg knows, looking at aggregates can fool us into making the wrong conclusions.

29 thoughts on “If Sugar Consumption Goes Down But Obesity Goes Up, Does That Prove Sugar Doesn’t Cause Obesity? Nope.”