I believe we finally got rid of one chicken-killer.  I wasn’t convinced there was just one predator going after the flock because of how the chickens were killed.  Some were headless with meat missing around the chest and neck.  From what I’ve read online, that’s a typical raccoon kill.  But others were eaten from the middle.  The online guides say that’s likely a possum or a skunk.  Also, we were losing them at the rate of one every day for a while.  I can’t imagine one predator being that hungry.

Anyway, this has a been a real head-scratcher.  Chareva kept looking for signs of burrowing under the fences.  I kept setting my trap with no luck … although the trap was moved a couple of times and some of the cat food I use for bait was gone.  Probably some critter reaching in from the side instead of going inside.

When we lost two more chickens from the young flock last week, I declared war.  First thing we did was get out the electric netting we used before we built the chicken yards.  We surrounded the coop with it. 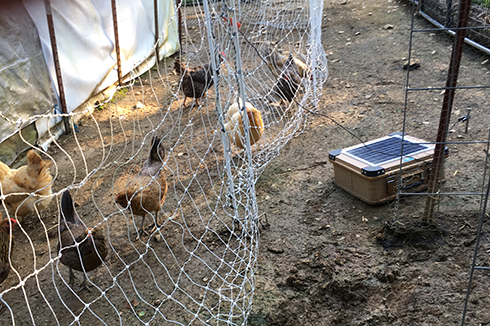 The next day, Chareva found the net knocked over and another dead chicken.

What the @#$% kind of animal isn’t afraid of an electric fence? I wondered.

So we bought a bigger trap with a better mechanism.  I put it inside the chicken yard, hoping a predator would be tempted to go for the easy meal.  No takers yet. 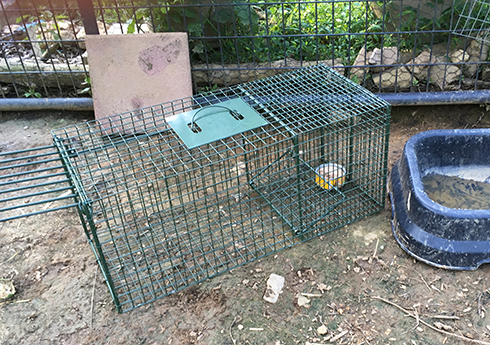 Fortunately, we also bought two traps that are steel tubes with a spring.  Put bait inside the tube and set the trap, and if a critter reaches in for the bait, the trap springs and closes on the paw.  I set one of those traps near the very young flock (which amazingly hasn’t been attacked yet) and another inside the other chicken yard where the older flock resided until they all disappeared.  I had a suspicion at least one predator was coming through that yard.

Sure enough, I went out to check on Saturday morning and found a raccoon in the empty chicken yard, snagged by a paw.  It’s been my job to send the predators to predator heaven – four raccoons, four skunks and one possum since we started raising chickens — but I said to Chareva, “One of these days, you’re going to have to kill a critter while I’m out of town at a conference or something.  You want to just get it out of the way?”

She agreed, so I gave her a quick refresher lesson on my .22 rifle, then she took care of Rocky Raccoon V.  He was by far the biggest of the five we’ve had to kill.  Well, no kidding.  He’s been feasting on chicken dinners.  I’m pretty sure that’s also why he didn’t go into my old trap.  It would have been a tight squeeze.

Unfortunately, we lost another chicken on Sunday.  Like I said, it’s probably more than one predator doing the damage.  The good news is that Chareva believes she spotted where they’re coming in.  The chicken yard has a gate at the far end that we don’t really use, and she thinks the openings are too big to stop predators from squeezing through.  So she reinforced the gate with chicken wire.

Meanwhile, we decided it was time to deal with the nets.  I originally propped them up on poles with plastic bottles at the top.  Seemed like a good idea at the time, and it did work for a couple of years.  Then the net finally frayed just enough to slide over the bottles.  As a result, walking around the chicken yard – say, to collect another dead chicken – was a pain in the butt.  Try bending over and walking under low-hanging nets, and the derned things yank at your hat, your ears and your glasses. 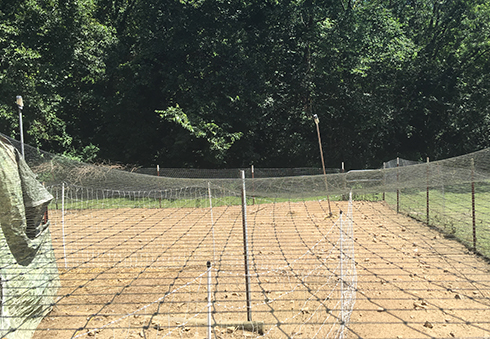 Chareva suggested we try running a strong cord or wire from pole to pole.  That way the pressure wouldn’t all be on the spot where the net sits on top of the pole.  Cords would also prevent the net from sagging between poles.

We weren’t quite sure how we’d connect the cord to the poles.  Sometimes coming up with a solution is just a matter of poking around a hardware section and waiting for inspiration.

I had the inspiration at a Tractor Supply store when I saw these tent stakes.  We’d taken a section of a pole that I’d cut down two years ago with us, so I knew the stake would slide into the pole.  The cords would easily slide through the tube on top of the stake. 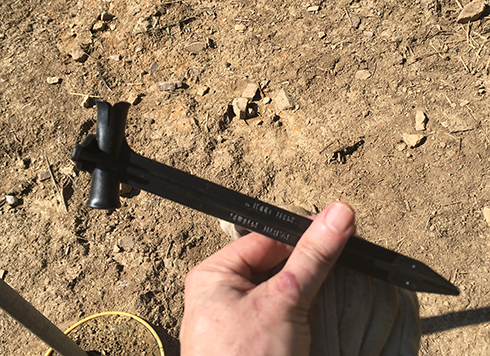 We cut away the plastic bottles and slid a stake into each pole.  Then we strung Paracord through the tube and connected the poles to the fence and to each other. 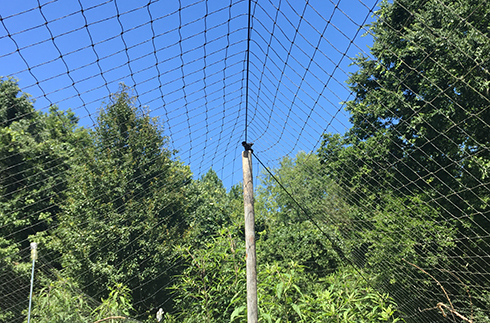 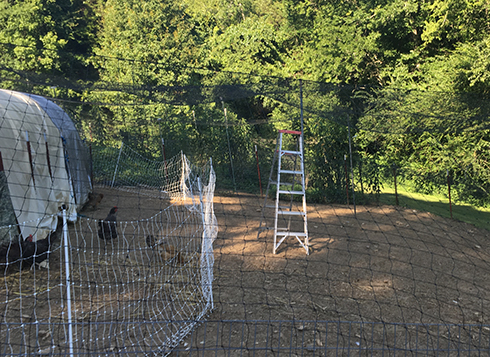 Now we can walk around in there again without ducking in most areas.  Let’s just hope we don’t have to walk around to pick up any more chicken carcasses.