Those green beans Chareva didn’t bother to re-plant this year are still growing like crazy.  Here’s today’s haul, along with today’s haul of tomatoes. 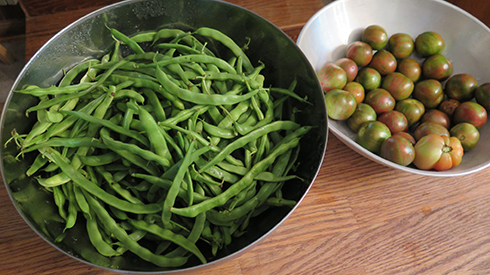 That’s the good news.  The bad news is that we’ve got a clever chicken-killer going after the younger flock.  We didn’t mind so much when the older flock started disappearing.  We were already wondering when it would be time to let them go.

But as I feared, once the predator was in the habit of enjoying chicken dinners on the Fat Head Farm, he decided to find his way into the chicken yard where the young egg-layers live.  It’s annoying to lose productive chickens, and doubly annoying because we can’t figure out who the critter is or how he’s getting in at night.

Chareva has checked the fence several times.  I’ve set my trap, but haven’t managed to catch the little @#$%.  I guess it’s time to set up the trail cam and least get a mug shot.  Based on what I’ve read online, the likely culprit is a skunk or a possum.  Raccoons usually leave most of the carcass behind.  The recent chicken victims have been mostly eaten.

One of the little joys of living in the sticks is being able to legally make big boom-booms with guns and explosives.  We had a much bigger group on hand for the Fourth of July this year than we did last year.  Chareva’s parents live here now, and she had two nephews and a niece in town visiting, along with their mothers.  Here’s a brief version of the show we put on last night.