With all the hubbub of reviews and podcasts — not to mention the hours I’m putting in on the film — I nearly forgot to post chapter one of Fat Head Kids.  I’m addressing that oversight now.

Again, I can’t recreate Chareva’s two-page layouts in a blog format, but all the text and most of the graphics are included.

Stuff I wish I knew when I was your age:
Getting Fat Isn’t About Character

Since much of this book is about why kids get fat, I’m probably supposed to stop here and show some charts to prove that childhood obesity is a big problem. I’m not going to do that, and here’s why: I went to school in the 1960s, and yes, things were different then. We had maybe one or two fat kids in each class. And you know what? After I became one of them, I never once got together with the other fat kid in class and said: 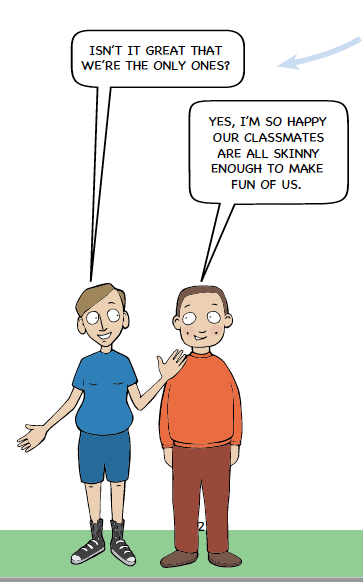 It’s no fun being a fat kid, period. If you’ve been getting fat, I know you want to change that. And I’ll bet at least a few people have already told you why you’re fat and what to do about it — like the classmates who explained it to me. 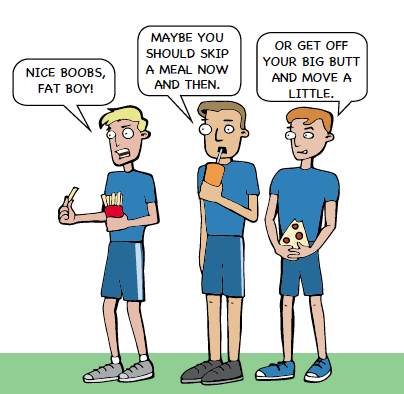 What these helpful young men were telling me is that people get fat because of a flaw in their character: They like to eat, so they eat too much, and then they get fat. So to lose weight, they just need to apply some willpower. Eat a little less, exercise a little more, or both.

Now … let’s suppose these guys grow up and become doctors, or dieticians, or personal trainers — and they learn it’s not polite to make fun of fat people. They’ll probably still give the same advice, especially if they’ve never been fat. Only now that advice will sound almost like science: 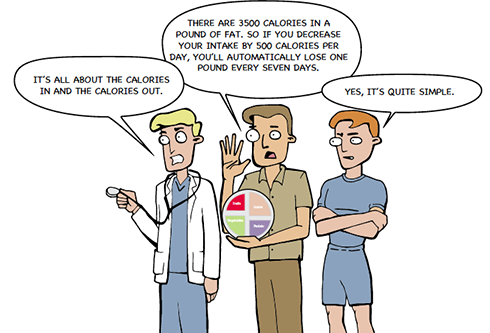 To understand calories, let’s forget about food for a minute and talk about something you wouldn’t eat unless you’re a termite: wood.

If you had a nice piece of wood, you could chop it into pieces and build something useful, like a chair. Or you could store the wood for later. Or you could toss it in a fireplace and burn it to produce heat. How much heat? Well, there are different units for measuring heat, but the common ones are BTUs (British Thermal Units), joules, and … calories. So technically, a calorie is a unit of heat.

But heat is also a form of energy, and in our world, energy makes things happen. Back in the Old West, people burned wood to boil water to make steam. The steam could turn an engine big enough to move an entire train. So we could say the energy to move a train came from the calories in wood. 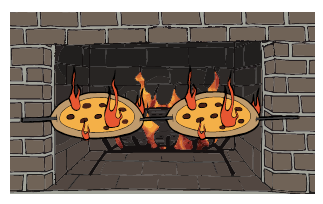 It’s the same with food. To determine the calories in food, scientists burn it in something called a calorimeter and measure the heat. No, they’re not trying to figure out how many pizzas you should burn to keep your house warm. They’re measuring how much energy the food would produce if you burned it all for fuel.

But you don’t burn all your food for fuel. Some of what you eat is broken down into building materials for the rest of your body. Some of it is converted to fat and stored in your fat cells. That way your body can burn fat for fuel between meals. If you couldn’t store calories in your fat cells, you’d have to spend most of your life eating.

Because your body can store calories as fat, a lot of so-called experts (like my helpful classmates) think your body works like a savings account. I call that The Piggy Bank Theory, and it looks like this: 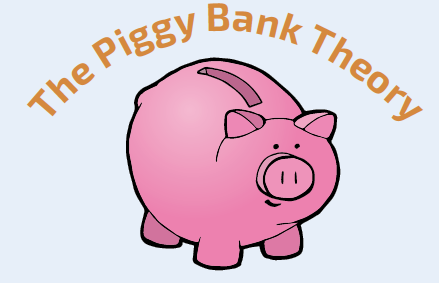 Every time you eat, you deposit calories in your body. Some of the food goes into your body’s Building & Repair Fund, and some goes to pay your daily energy bill — the energy your body burns just to stay alive. But if there’s any extra food left over, those calories are automatically converted to fat and stored in your fat cells — like saving money in the Piggy Bank. 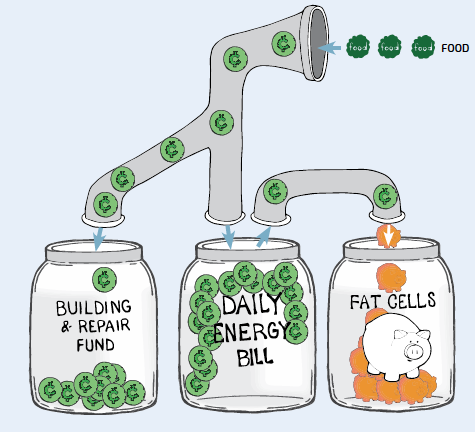 According to The Piggy Bank Theory, losing weight works by the same simple math. To shrink your fat cells, you just deposit fewer calories by eating less. Or you spend more on the energy bill by exercising. If you do either one, your body has to withdraw calories from the piggy bank, so you lose weight. It’s a simple matter of calculating calories in vs. calories out.

People who believe in The Piggy Bank Theory will do things like drive to a gym, take an elevator to the workout room, then spend an hour on a treadmill walking nowhere. Or they write articles offering simple advice like this:

If you cut just one pat of butter from your daily diet and walk for just 20 minutes every day, you’ll lose 20 pounds of fat in a year!

But does that really make sense? Most fat people hate being fat. They spend billions of dollars on gym memberships, weight-loss clubs and weight-loss drugs. Are we supposed to believe they’d rather be fat than give up one pat of butter per day? 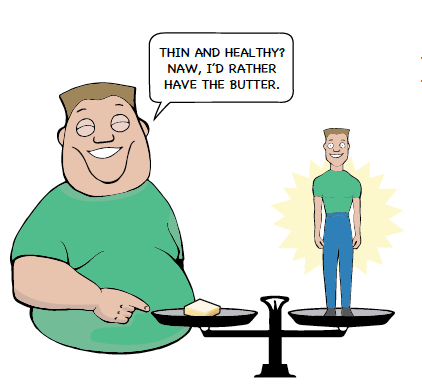 If people get fat because of their character, why are there more overweight babies now than 30 years ago? Did babies in previous generations drink less mother’s milk so they wouldn’t get fat? Did they go to baby-aerobics classes?

If your body works like a bank account, how do we explain naturally thin people, like my wife? They have no idea how many calories they consume and eat whatever they like, but never gain weight. That’s like making lots of deposits and withdrawals at your bank, without ever bothering to add them up … and yet every time you check your balance, it’s exactly 2,000 dollars.

Here’s something else The Piggy Bank Theory can’t explain: We have two big dogs named Misha and Coco. They’re sisters, and we feed them exactly the same meals. Coco is bouncier and more active than Misha, so she ought to burn more calories, right? But Coco is 18 pounds heavier. In human terms, if Misha weighed 180 pounds, Coco would weigh 212 pounds. When we bought them as puppies, the breeder told us Coco would be bigger. She never mentioned calories.

Obviously, there’s something wrong with The Piggy Bank Theory. Plenty of doctors and researchers have known that for years.

In a study from the 1960s, researchers wrote about obese patients who were locked in a hospital and fed just 600 calories each day. That’s about one-fourth as much as most adults eat. And yet the obese patients didn’t lose weight. Is that because of a flaw in their character? Should they only eat 300 calories per day? Or 200?

In an experiment at the Mayo Clinic, researchers had a group of volunteers eat an extra 1,000 calories every day for 56 days. According to The Piggy Bank Theory, those 56,000 extra calories should have made everyone 16 pounds fatter. But some people gained 10 times more body fat than others. The naturally-thin people barely gained any weight at all.

In another experiment, researchers took a group of mice and reduced their daily calories by five percent. That’s the mouse version of cut just one pat of butter per day from your diet. They also used special lab equipment to make sure the mice were just as active as before.

Let’s apply The Piggy Bank Theory and predict what happened:

But that’s not what happened. When the mice were given less food, their fat cells got bigger, not smaller.

No wonder one scientist wrote this in an article about obesity:

The commonly held belief that obese individuals can ameliorate [improve] their condition by simply deciding to eat less and exercise more is at odds with compelling scientific evidence.

If your goal is to lose weight, let me ask you a question: Would your school hire a football coach who lost 97 percent of his games? Would your parents hire a piano teacher if 97 percent of her students never played any better … and some ended up playing worse?

Of course not. But year after year, millions of people try to lose weight by following The Piggy Bank Theory. And year after year, 97 percent of them fail. In fact, many end up fatter than before.

People who believe in The Piggy Bank Theory argue that it’s based on the Laws of Physics. Matter and energy can’t just disappear or be created out of nothing. So to get bigger, you have to consume more calories than you burn.

That statement is true. But for explaining why people get fat, it’s also meaningless. It’s like saying Donald Trump is rich because he deposited more dollars in the bank than he spent. It’s like saying if your toilet overflows, it’s because more water went into the bowl than went out. 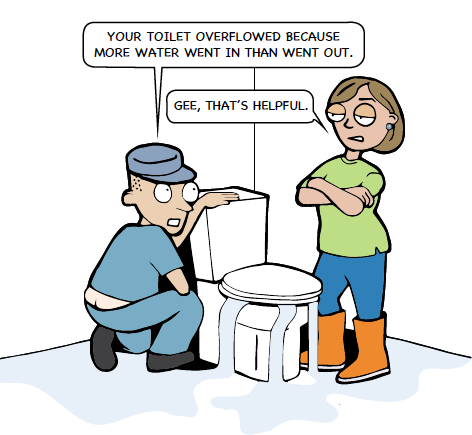 To fix a problem, you can’t just describe HOW it happens. You also have to understand WHY it happens. We’ll begin looking at WHY we get fat in the next chapter.