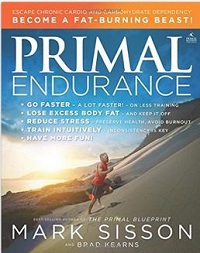 You’ve pretty much got to like a book when one of the main pieces of advice it offers is to slow down. Of course, that assumes you need to slow down – perhaps not a problem for most of us. If you’re already inert, you’d have to take up cycling or jogging and go too fast before “slow down!” would apply.

But slowing down is exactly what some people need to do. I’ve recounted this story again, but it bears repeating: on one of the low-carb cruises, a woman complained to Fred Hahn that she was overweight despite getting up at the crack of dawn several days per week to go running for an hour. Fred explained that she was exercising too much and sleeping too little. As a result, she was almost certainly cranking out stress hormones, and stress hormones can make us fat.

“But what should I do to lose weight if I don’t go running?” she asked.

I could see the resistance in her expression.  This can’t be right.  Dangit, if you’re willing to wake up at dawn and horsewhip yourself into running for an hour before heading off to a full-time job, there ought to be a reward. It’s only fair.

But our bodies don’t operate on fairness. They operate on biochemistry, and the lack of sleep and chronic over-training were creating a biochemical mess for the devoted runner. Fortunately, she eventually learned the lesson. Several months after the cruise, she wrote a thank-you note on Facebook, telling Fred she adopted his advice and cut back on running to get more sleep … and lost 20 pounds.

Now, I don’t know how many frustrated dieters are out there running too hard and too often. My guess is not very many – partly because so many of us have already been there, done that, and found it didn’t work. While going through some old VHS tapes awhile back, I found one that showed me returning from one of my regular jogging sessions – and I was quite noticeably fat.

My diet was crap in those days (although of course I thought all that whole-grain pasta with low-fat sauce was good for me), so that was certainly a big part of the problem. But I’m also pretty sure I was running myself straight into what Mark Sisson calls the Black Hole in his latest book.

The book is titled Primal Endurance: Escape chronic cardio and carbohydrate dependency and become a fat burning beast! Sisson co-wrote the book with Brad Kearns, who was a champion triathlete back in the day. Sisson, as you probably know, was also a champion runner and triathlete in his youth. Back then, he carb-loaded before races and over-trained. The health problems he experienced as a result prompted him to do the research that led to Mark’s Daily Apple and The Primal Blueprint (still one of the best all-around books on diet and health).

Primal Endurance opens with a nice summary titled 115 Things You Need to Know. It’s essentially most of the advice in the book, boiled down into short paragraphs. The introduction also explains why this book is necessary: too many people trying to get fit are going about it the wrong way, using training methods that are ineffective at best and harmful at worst. In other words, they’re pushing themselves into the Black Hole.

The what? What’s a Black Hole?

Glad you asked. Chapter One is titled Slow Down!, and it explains what the Black Hole is and why you need to avoid it. In a nutshell, the Black Hole is the zone between a proper aerobic workout that burns mostly fat and a high-intensity workout that burns mostly glucose. A brief high-intensity workout is fine – in fact, it’s beneficial. A long aerobic workout is also beneficial. But if you push that aerobic workout too hard and for too long, it’s no longer truly aerobic, and your body has to start cranking out glucose — and to do that, it has to raise your stress hormones. That’s where the trouble begins. To quote from the book:

Metabolically, chronic cardio workouts are slightly too strenuous to emphasize fat as a fuel source, and instead emphasize glucose burning. While this makes the workout more difficult and generates more fatigue and sugar cravings right afterward, the truly damaging effects of chronic workout patterns occur around the clock.

… If your goal is to perform well in endurance events, get leaner, be healthier, and delay the aging process, it’s quite possible that your training sessions are promoting the exact opposite results of your goals.

A lot of us have already heard about the detrimental effects of chronic cardio, so we don’t do cardio workouts at all. No jogging, no aerobics, no Zumba classes, etc. We do slow-burn workouts with weights and let it go at that.

Heh-heh-heh … turns out that’s another one of those beliefs that needs some re-visiting. According to Sisson and Kearns, aerobic exercise is great for health and fitness – in fact, it should form the base of your exercise program – but you have to do it correctly. You have to stay out of the Black Hole. That’s where the “Slow Down!” advice comes in.

Avoiding the Black Hole is actually simple, at least if you have a reliable way of checking your heart rate during exercise. You simply subtract your age from 180 to find your target heart rate. (There are suggestions in the book for adjusting the rate depending on other factors). Then you exercise at a pace that gets you near but not above the target rate.

Sisson and Kearns emphasize several times that you absolutely must monitor your heart rate if you want to avoid the Black Hole. You can’t just rely on how you feel.

You may still feel quite comfortable as you extend your effort well beyond aerobic maximum heart rate. Psychologically, you might even gain a greater sense of satisfaction that you are actually “getting a workout” because of your slightly labored breathing pattern, elevated perspiration, and elevated perceived exertion in the brain…. The black hole has been confirmed by numerous studies as the default landing area for people relying solely upon perceived exertion to govern intensity level.

I can attest to that. Before I even finished the book, I wanted to see what a proper aerobic workout feels like. After some research into various heart monitors, I ended up getting a Fitbit. I like it because if I double-tap the face, it displays my heart rate. (That requires choosing a particular setting in the software interface, by the way.)

So with the Fitbit on my wrist, I got on Chareva’s new bike and began peddling with a fair amount of resistance. A minute or so in, my heart rate was still below 100. Geez, I thought, my legs are working kinda hard here. I don’t know if I can keep this up for 30 minutes.

Then my heart rate began to climb. And climb. And climb. Next thing I knew, it was above 140. I had to slow down, then choose an easier gear with less resistance, then slow down again. I finally found a pace that kept my heart rate right around 120 – and yes, I had to pedal slower than I would have guessed.  Once I settled into the correct zone, it was an easy workout.

So why bother with aerobic workouts at all? The book names several benefits, but perhaps the biggest is triggering the process of building new mitochondria.

To reap all the benefits from proper aerobic exercise, however, we also have to burn the right fuels. Chapter Three is titled The Primal Blueprint Eating Strategy, and if you’ve read any of Sisson’s previous work, you can pretty much guess what kind of diet he recommends.

There are also chapters on adding strength training and sprints to the exercise program, although Sisson and Kearns urge the reader to spend a few weeks building an aerobic base first.

If one of your New Year’s resolutions is to start (or retool) an exercise program, this is an excellent guide to doing it right. Sisson’s books are popular largely because of the solid information he provides, but also because he’s a gifted writer who explains things simply and clearly. Primal Endurance, like his other books, passes what I call my Aunt Martha Test: if you gave a copy to your Aunt Martha, she could read it and understand it all without becoming confused or running for a medical dictionary.

As I explained in my previous post, this book happened to come along right when I decided I need to do more than just lift weights during the winter months. I’ve barely started the program, so I can’t yet say if it’s making a difference. I’ll give it few months and write a follow-up.

I hope the results are very good indeed … because if slowing down is what makes aerobic exercise actually beneficial, that would be welcome news to the millions of people who hop on treadmills in January and give up by April when it’s clear the rewards don’t match the effort.