I wrote a couple of posts back in the day titled This Is Why We Do What We Do. (Here and here if you want to check them out.)

Okay, this is a case of perfect timing, so I need to interrupt myself. I literally just now pasted in the link for the second “This Is Why We Do What We Do” post. That post opened like this:

I received one of those hate mails this week, full of the usual brilliant observations:

Your film was obviously paid for by McDonald’s … Super Size Me was awesome and a really important film because it alerted people to the dangers of fast food … your on-camera experts must be beef-industry hacks if they say saturated fat isn’t bad for you … you think you’re funny but you’re not, you’re just really annoying … your film sucked so bad, I stopped watching before the end … etc., etc., etc.

Later in that post, I quoted from one of the many “thank you for changing my life” emails I’ve received to explain why these goofs who think they’re going to hurt my feelings with a nasty email are dreaming.

About five seconds after pasting in the link, my email program dinged at me. So I checked the email and read this:

Hello.
I just wanted to tell you I saw FatHead.
Or, should I say, CrapHead.
Because I just saw a full load of bologna. Literally, the worst movie ever.
You sir, Tom Naughton, can go to hell, or better yet, one of the places you defend in CrapHead, and die.
No one will miss you.
And no one will remember CrapHead in 10 years.
Have a nice day.

Another angry little pissant who thinks he’s going to hurt my feelings. You can’t make this stuff up.

Anyway, back to the original topic.

While taking time off to finish the draft of the book, I received a couple more reminders of why we do what we do. One came in the form of a conversation with a co-worker who has type 2 diabetes. His A1C has been climbing, and he’s concerned that he’ll die young, or lose his vision, or suffer some other calamity. I asked him about his diet.

He’s been told almost nothing by his doctor, and the little advice he’s gotten has been lousy. I asked what he eats. Breakfast is usually an apple and a banana, but sometimes he has oatmeal. He was told that’s good for him.

And your other meals?

Well, for lunch he usually has a sandwich. But he uses stone-ground wheat bread, because he was told that’s good for him too.

I explained that he needs to stop filling up on sugars and starches in the morning and try eating bacon and eggs instead. He didn’t disagree, but asked, “So … eggs are okay?”

You can understand his suspicion, of course. We were all told for decades that eggs will clog our arteries because of the cholesterol. The USDA Dietary Guidelines Committee has finally backed off that warning (a mere 35 years too late), but I don’t think most people got the memo.

So here’s a guy worried that his type 2 diabetes will kill him, and he’s been told eggs are bad, but oatmeal and wheat bread are good. No wonder his A1C is climbing.

The other reminder of why we do what we do arrived in an email. Here’s part of it:

I’m a long time reader of your blog and have emailed you a few times in the past. I just needed to send you a message for a quick rant on some extreme frustration I recently had. I work in mental health as an outpatient clinic therapist and recently had a patient who couldn’t come to our last appointment because she went to the ER for chest pain. Turns out she had a heart attack. She’s only 36 years old, but is overweight, smokes, not a good diet, no exercise, and has a strong family history.

She came in after being released from the hospital. The real kicker is this: she’s been told to eliminate saturated fat from her diet to the point of it only being 7% of her diet. She was told no butter, no fatty meats, blah blah blah. They also put her on a statin even though her cholesterol was ok.

The hospital staff apparently was quoting directly from the USDA guidelines. As for the statin … don’t get me started.

Then….she followed up with this comment, “But what’s great is I saw that Graham Crackers have no saturated fat, so I can eat the s#%*@ out of those.” My internal response? NOOOOOOO!!!!!!!!

NOOOOO, indeed. Out of curiosity, I looked up the ingredients and macronutrients from a (ahem) “nutrition” label for graham crackers online. The ingredients:

Refined wheat, sugar and hydrogenated oils.  Nope, no threats to cardiovascular health there.

Here are the calories, carbs, etc: 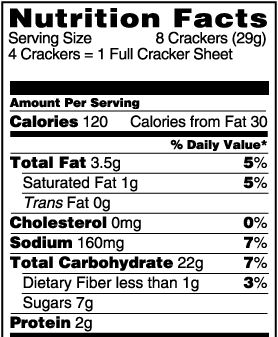 Hmmm, there’s a gram of saturated fat in there, so perhaps those crackers will kill her after all.  The email continues:

How can doctors still believe this jargon? How can one honestly believe a Graham Cracker is better than an Egg?

Good question. We’re living in a profoundly silly age where food-like products made from refined grains are considered health foods, while real foods humans have been eating forever are considered killers — because they contain fat.

But that’s why we do what we do. That’s why I’m determined to finish this book project, and then jump straight into the film/DVD version.

More laughs. The pissant whose email I quoted above sent another one on Friday:

Angry loser? Me? You sound like a whiner or a kid that just lost his favorite toy or a bad football player like Adrian Peterson when the NFL suspends him for beating up his child.
You don’t know me pal. I’m a powerful citizen of the US of A, the greatest country in the world.
I have powerful friends that can f@#$ you up, just like they did with Kobe or Armstrong.
Remember good, and write it down Mr.Nutjob, I’m Mr. Hands, I have power, I have influences, and I can beat you up anytime soon.
You f@#$%ing moron.
At least you had the time to answer mi e-mail.
Have a nice day a-hole.

Well, I believe him, of course.  That’s what powerful and influential people with powerful friends do:  they send angry emails to film directors whose films they don’t like.  Then they return to their video games until Mom calls them for dinner.

Figuring perhaps a reply will cause his pissant head to explode, I sent one:

Sure, send your powerful friends on over to f@#$ me up.  I’ll introduce them to my rottweilers and my Mossbergs.

You can’t make this stuff up.