Chareva’s spring project is a labor of love, but it’s also quickly becoming a labor of necessity.  When her flock of 26 (surviving) chicks arrived a few weeks ago, they were itty-bitty things — like these recently-arrived chicks Alana will be raising for a 4-H project:

Chareva’s chicks have already grown to look like this: 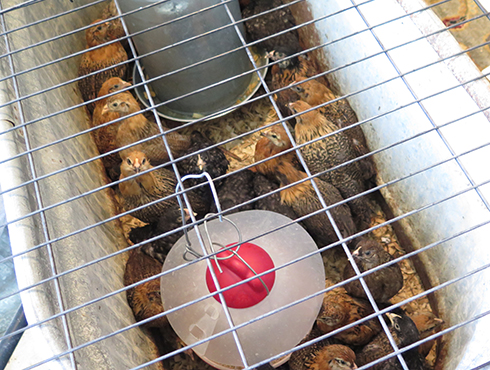 It’s so crowded in that trough, they’re probably wondering if they’re on the New York City subway.  I believe I saw one of them scrawling graffiti on the walls.  They need to get outside, and soon.

Trouble is, the raccoons and possums are already outside.  We can’t move the chicks out there until they have a secure place to live.  So we’ve been out there for long days, trying to get the first of the two chicken yards finished.

We’re making good progress.  At the end of last weekend, the chicken yard looked like this: 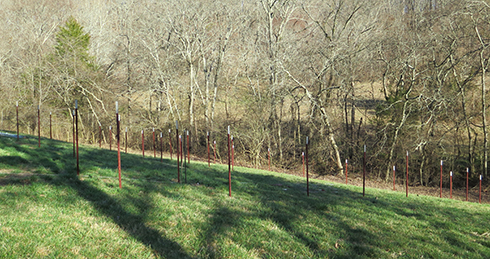 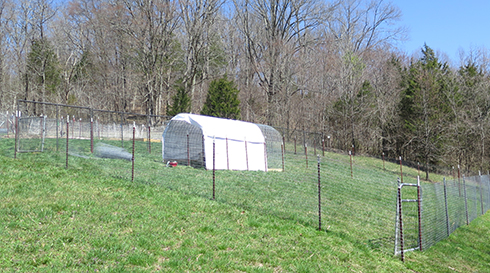 Not done, but getting there.

The biggest pain in constructing a chicken yard is stretching the wire fencing between the posts.  The stuff arrives in big rolls, and when you unravel it, it desperately wants to roll itself up again.  Add in the fact that our land is hilly, with the angle of the hill seeming to change every few feet or so, and stretching the fencing tight across the posts and close to the ground is a wee bit of a challenge.

We made the job a bit easier by buying a fence stretcher.  Fence stretcher … sounds like a cool contraption, eh?  Something with levers and gears?  Nope.  It’s basically a 2 x 4 hunk of wood with two handles and a metal bar that clamps to the fencing.

Tighten down the metal bar, grab the handles and pull for all you’re worth.  Then crouch there in that awkward position while your wife uses zip-ties to strap the sort-of-tight fence to the t-posts.  Be patient.  She’s going as fast as she can.

Those aren’t the exact directions, but they should be.

The zip-ties are a temporary measure.  Once each section of fence is in place, we use metal clamps that hook to the fence, bend around the t-post, then wrap around the fence on the other side of the post.  The chicken yards may become corrals for larger animals someday, so we attached four clamps to each pole.

Even with a properly-stretched fence, we ended up with gaps at the bottom here and there because of the dips in our land.  Chickens won’t try to push under the gaps, but (as we learned the hard way with our chickens in the front pasture) a hungry raccoon or possum will. 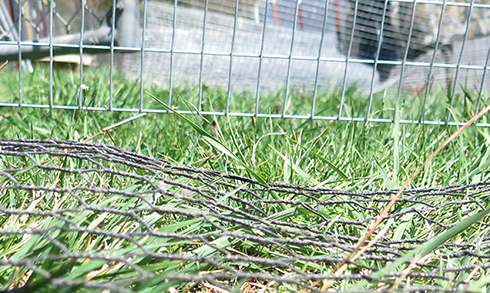 If we don’t fix the gaps, we may as well ring the raccoon dinner bell.  So Chareva will attach heavy-gauge chicken wire all the way around, then bend it out along the ground and attach it with garden stakes.

That protects against predators taking the low road.  We also have to protect against predators that would climb over the fence and hawks that would swoop down for a chicken dinner to go.  Last year we covered the front chicken yard with a big ol’ net that’s done the job quite nicely.  We’re going to cover both of the new chicken yards with the same size and brand of net.

The one thing neither of us likes about using nets is having to bend over to walk beneath them.  We elevated the net in the front pasture by using the barn as a tent-pole, but we still have to do the deep-bend move to get under the gate.  I wondered aloud if there was some way to construct a human-sized entryway to the new chicken yards.  After we kicked around a couple of ideas, Chareva remembered we have this thing: 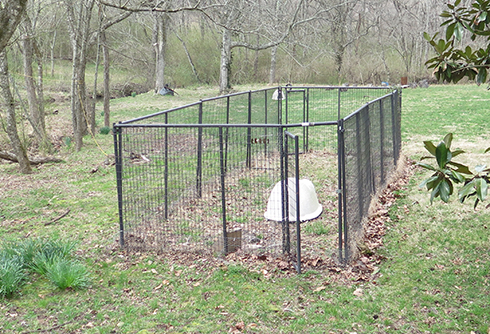 That’s a dog kennel that’s been sitting in our front yard for years, serving no purpose whatsoever.  Notice the human-sized doors.  Instead of just using those, I suggested we take the whole thing apart and use it as fencing on the uphill side of both chicken yards.  That would raise the net nice and high on one side at least.

Chareva agreed, but reminded me she helped a renovation crew-member move the dog kennel three years ago.  Those panels are really heavy and will be difficult to carry up the steep hill, she warned me.

Nope.  Not light, but not all that heavy either.  As we trudged them uphill, she kept saying she could swear they used to be heavier.  It occurred to her that she’s done three years’ worth of farm work since moving them the first time.  She’s probably stronger now than she’s ever been in her life. 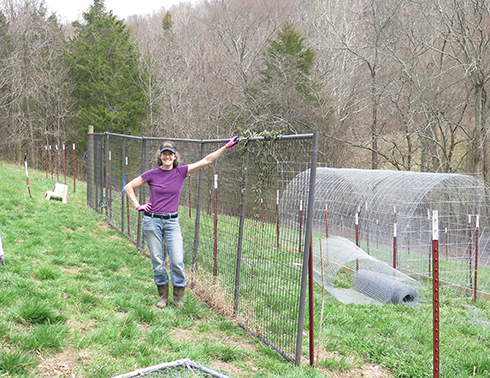 Anyway, re-purposing the dog kennel was the perfect solution.  Each chicken yard now has a tall door on the high side of the hill, and with the panels all bolted together, they make for a sturdy fence.  I had to pull up several t-posts I’d pounded in last week and re-position them against the poles in the panels, but it was worth the effort. 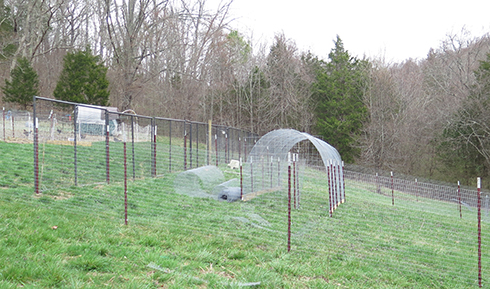 Unfortunately, when I bolted together the last panel at the far end (the other chicken yard we’ll finish later), I had a major brain-fart:  I saw a four-foot gap between the end of the panel and the line of t-posts I’d pounded in last week.  Rats, I said to myself, these don’t line up. We must have measured something incorrectly.  So I pulled up several posts, tied a string from the panel downhill to the corner post, and pounded in the posts along the string.

If you take a peek at Chareva’s plans, you’ll recognize my mistake.  I added a red line where I re-positioned the posts. 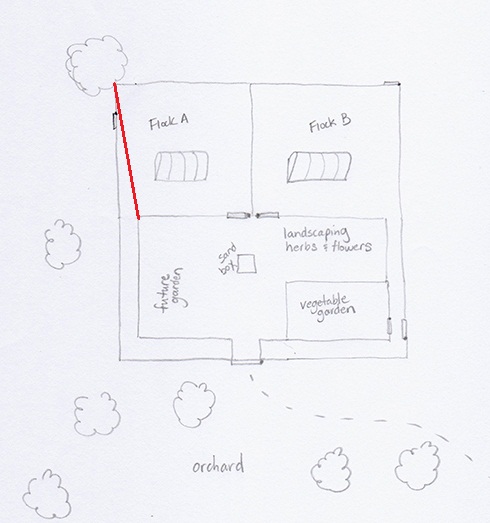 Whoops.  Hours later, Chareva informed me  the “gap” was intentional.  That’s the opening for the “Flock A” chicken moat that will extend around the future garden.  So when we get around to that chicken yard, I get to pull the posts again and pound them in for the third time.  I’ve mentioned that pounding posts is a great workout for the triceps.  If I keep goofing up like this, I’ll have triceps bigger than my thighs.

The hoop houses will be made from cattle panels bent into a U-shape and covered with vinyl.  New vinyl that’s sufficiently thick is expensive, but Chareva found a deal on some that were previously used for highway billboards.  (I was hoping one of them would have a BETTER CALL SAUL ad on it, but no luck.)  She has the first hoop house almost ready to go. 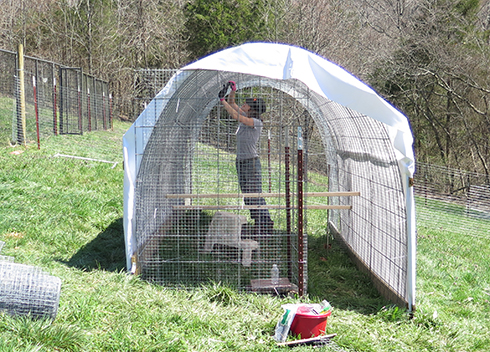 We need to close off the chicken moats at night so predators don’t climb the garden fences and sneak into the chicken yards through the moats.  We also need the nets to be secured to the fence all the way around.

Obviously, we can’t attach the nets to the gates that open the chicken moats.  So we attached a bit of fencing over the entryway to the moat.  The gate will close against the bottom of the fencing, and the net will be attached to the top. 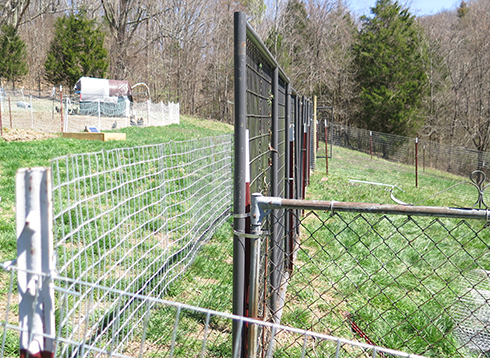 I may also string a little barbed wire in between to discourage raccoons from trying to push between the strip of fencing and the top the of the gate.  Raccoons are determined little critters.

When Chareva and I unrolled and positioned the giant net over the chicken yard in the front pasture last year, we had so much fun it nearly ended in divorce.  Well, okay, it wasn’t that bad, but it was frustrating.  We couldn’t quite figure out how to unroll the thing at first, plus it kept getting snagged on the barn.

We remembered the lessons from that experience.  This time Chareva put a tarp over the metal snaggy bits on the hoop house, and we were able to unroll and position the net pretty quickly. 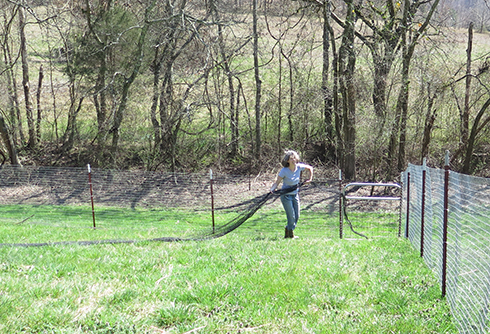 The net is where it needs to be now, but loose.  Later this week we need to tie it down to the top of the fencing on all four sides.  Then we’ll sink some poles into the ground to provide elevation on the low side of the hill.  Ideally, we’ll be able to walk around most of the chicken yard without ducking under the net. 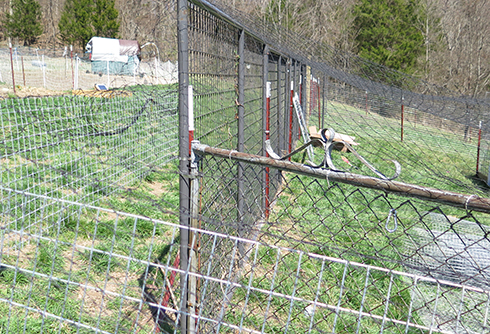 When all that’s done and the hoop house is finished, we can finally get the chicks out of their subway car.