I’ll explain the title of this post shortly.  First I want to catch up on the previous month, since I took the rest of the year off from blogging after my dad died on December 3rd.

I still don’t know what kind of infection I picked up three weeks ago.  Based on what I read online (plus a medical opinion from an R.N.), it was likely the flu or walking pneumonia.  Either way, it was a tough little bug.  I’m just now starting to feel normal.  Well, normal with a slight head cold.  I’m down to a cough and a wee bit of congestion at this point.

I had a fever when this thing first hit.  Then the fever went away.  Then it came back.  Then it went away again.  I ended up sleeping 12 hours or so per night, except for a couple of nights when I had insomnia and didn’t sleep at all.  As I’ve mentioned on the blog before, I’ve had occasional bouts of insomnia my entire adult life.

Unfortunately, one of my insomnia nights was the night before we were supposed to drive to Illinois for my dad’s memorial service.  I went to bed at 10:30, hoping to get eight hours of sleep before driving seven hours there and seven hours back.  Still awake at 1:00 AM, I took a dose of tryptophan, hoping that would do the trick.  I took another dose at 3:00 AM, still hoping it would do the trick.

By 5:00 AM, I knew I wasn’t going to sleep at all and we wouldn’t be making the drive.  I was running a fever again and dead on my feet.  Driving in that condition would be about as safe as driving after five scotches.  Chareva volunteered to do all the driving, but I nixed the idea.  If we made the trip, she’d be driving us home through the winding hills of Tennessee at 1:00 AM – four hours past her usual bedtime, after 14 hours behind the wheel.  I’d no doubt be passed out by then and wouldn’t be able to talk to her to help keep her awake.

Nope, not taking that risk.  Not in Christmas traffic with my girls asleep in the back seat.  So I had to call my mom and tell her we wouldn’t be there.  That sucked.

I wasn’t happy about being sick during my two weeks off from the programming job, but perhaps the timing was for the best.  I had the option of sleeping until noon and vegetating in front of the TV when my symptoms were at their worst.  Back in the day, of course, I would have gone to a doctor and nuked the bug with antibiotics.  Now that I’m all about maintaining a healthy gut microbiome, I chose to ride it out.  I went with sinus rinses, oil of oregano, vitamins C and D, colloidal silver, lots of sleep, and half-doses of ibuprofen to treat the headaches I was getting every day.

Chareva’s family arrived a few days before Christmas.  Her dad had some kind of infection similar to mine.  You could track either one of us through the house by the coughing.  Fortunately, none of the girls (including our niece) picked up the infection, so they were all bouncy and happy throughout the holiday week.

I wasn’t.  Well, I was reasonably happy, but nowhere close to bouncy.  When Chareva woke me on Christmas morning to tell me the girls were awake and it was time to grab the camera, I thought I’d died and gone to hell.  But I slammed down some coffee and took on my role as family videographer and DVD producer.

At the end of each year, I go through all the video footage and photos and put together a dozen or so videos that end up on a DVD.  It’s a big task, and I basically go face-down in it and don’t come up for air until it’s done – usually about a week’s worth of long days.  I made that commitment to myself right after Sara was born.  Friends of mine told me they’d been shooting video of their kids for years, but never done anything with the footage.  I didn’t see the point in collecting boxes of DV tapes and SD cards full of video footage no one will ever organize and watch, so I bought a copy of Adobe Premiere and taught myself video editing – knowledge that came in handy when I decided to make Fat Head.

Each of the videos I create in some way tells a story about the girls’ lives (and ours, of course) during that year.  Photos and video footage where there’s no clear or useful sound end up as music videos.  Now that the girls are older, they serve as my music consultants, picking songs they like for their videos – which is big help, because I’m an old man who doesn’t follow pop music, and I haven’t even heard of most of the songs they recommend.

Here’s one of this year’s videos:

For the past two years, the DVD has included a video to summarize the goings-on here on the farm.  Here’s the one I created for 2013:

And here’s this year’s farm video:

Which finally brings me back to the title of this post.

On December 29th, the girls were supposed to take the pigs for a weigh-in at the agriculture center – a requirement if they want to show the pigs at an upcoming 4-H event.  Chareva suggested we’d be wise to get the beasts into the trailer the night before, since she and the girls would have to leave early in the morning.

That led to the obvious question:  how do we get the pigs into the trailer?  They were wee piglets when we bought them, so I just picked them up and carried them. 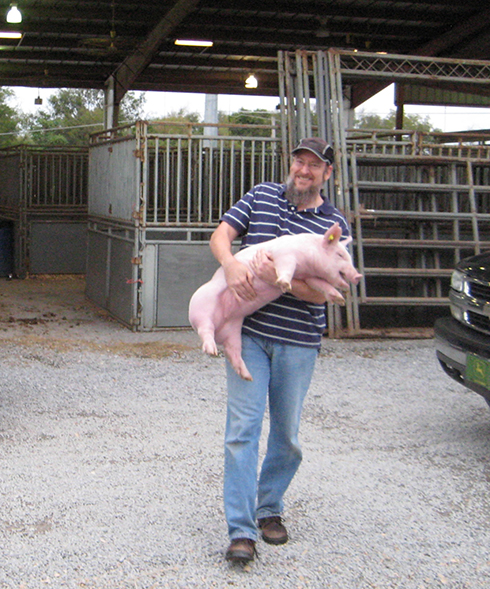 They’re not piglets anymore.  They’re hogs.  If I could carry them now while they’re struggling to get loose, I’d deserve a tryout with the Titans.  So we decided to construct a chute of sorts by adding another fence outside their fenced-in yard, with the chute leading to the trailer.  In the video above, you can see Chareva’s sister Susan helping out by pounding in t-posts for the chute fence.

While she and Chareva were building the fence, I attached the trailer to the van and drove it up to the driveway, then backed it up to the gate at the end of the chute.

Sounds simple, doesn’t it?  Just back the trailer up to the gate.  If you agree that it sounds simple, then you’ve never tried steering a trailer attached to a van while driving in reverse.  Here’s all you need to know:  the trailer will always roll in the opposite direction of where you want it to go.  You turn the wheel left, the trailer rolls to the right.  So you think to yourself, “Well, that means turn the wheel right to go left.”  Yes, that would make logical sense.  But now the trailer knows you want it to go left, so when you steer to the right, it rolls to the right.

With the trailer finally in position, it was time to run the hogs down our makeshift chute.  The girls have already attended a couple of 4-H workshops and were told the key to moving pigs is to nudge them along with a spindly little thing called a pig-whip.  The theory is that the 200-plus pound hog says to himself, “Geez, a nine-year old girl is tapping my thick, incredibly tough skin with a plastic stick.  I better go where she wants before I suffer a serious injury.”

That’s the theory.  In practice, the hog goes wherever the hell he wants to go – or more to the point, doesn’t go wherever the hell he doesn’t want to go.  As you can see in the video above, the hogs were happy to leave their pen and do a little exploring and rooting around.  But once they reached the narrow part of the chute, visions of ham and bacon danced in their hog-heads, and they decided to bolt back to their pen.

The four of us went into the pen and tried chasing them out by forming a human wedge and shooing them toward the gate.  The hogs muscled through the wedge, stepping on our feet and pushing through our legs.  At one point, I believe I heard the pink hog call me a “weak-ass little bee-atch.”

It had rained the previous two days, so their pen was all mud – or so I thought until the odor worked past my sinus congestion.  Then my nose informed me that my boots were sliding around in a mixture of mud and pig @#$%.  I barely kept my balance a couple of times by employing the helicopter-arms technique.  I figured I was perhaps one false move away from creating a slapstick scene my daughters would share with friends and relatives for years.  So when Chareva suggested we give up for the night and try again in the morning, I happily agreed – even though it meant I’d be waking up early instead of sleeping in late to fight the infection.

Chareva got online and read up on how to move ornery hogs.  She then explained that we needed to rig up something called a pig board.  Apparently while hogs have no qualms about pushing their way through a person’s legs, they’re scared @#$%less of large, flat objects and will run the other way.  That’s the theory, anyway.

The reality (as I found out early the next morning) is that a hog will shove its way past any damned thing it wants to if it believes there’s sausage factory somewhere in the other direction.  Perhaps the problem was that our (ahem) “pig board” was a small gate that’s been sitting on the property for 25 or 30 years.  The hogs could see right through it, and what they saw were human legs that had already proved incapable of blocking them during several previous attempts.  Their confidence wasn’t exactly shaken.

And so, over Sara’s protests, we declared our attempt to shoo the hogs into the trailer a colossal failure.  Man, was I glad I woke up early and dragged my stuffed head out of bed for that experience.  I got punked by hogs – twice in just over 12 hours.

In reviewing the colossal failure, we concluded that our biggest mistake was making the chute too wide near the pen – in other words, not sufficiently chute-like.  The hogs had too much room to run around us.  We’ll have to pull up the t-posts and create a chute that’s just wider than a real pig board – the kind hogs can’t see through.  They’re heavy, powerful animals, but I believe if Chareva and I were both pushing the pig board, we could convince a hog to keep moving.  That’s the theory, anyway.  The reality is yet to be determined.

After winning a blue ribbon (and some nice prize money) by showing one of her goats, Sara was disappointed she won’t be showing her hog at the 4-H event.  I’ll only be disappointed if the hogs don’t make for some tasty ham and bacon in the spring.

Belated Happy New Year to all of you, and again, thanks for all the kind words and good wishes while I took some time off.