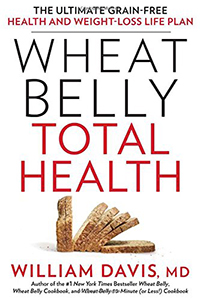 Even before I read his latest book, Dr. William Davis struck me as a man who will never be satisfied with how much he knows about diet and health.  I suspect that while I sit here writing this review, he’s poring over new research and incorporating it into his thinking.

On the first low-carb cruise I attended more than four years ago, Dr. Davis gave a speech on the importance of controlling blood sugar, with lots of information on the damage that occurs inside our bodies if we don’t.  If he mentioned wheat at all in that speech, it was probably in reference to how wheat spikes glucose.  I was aware of his Track Your Plaque program and read his blog now and then, but after his cruise speech, I mostly thought of him as the mind your blood sugar doctor.

Barely a year later, I received an advance copy of a book titled Wheat Belly and was blown away by all the information about the damage caused by grains.  It seemed that every other page, I was mumbling Oh my god, I had no idea to myself.   Up to that point, I had been limiting my grain consumption mostly to keep my carb intake down.  I still ate a hamburger bun or a serving of pasta now and then if I could squeeze it in under my carb limit.  But as I explained in the follow-up section of the Fat Head Director’s Cut, that all changed after reading Wheat Belly.  Now I avoid grains because they’re grains, not because of the carb count.

I don’t know how many millions of people have read Wheat Belly, but here’s an indication of the book’s reach:  two casual acquaintances who only know me as a programmer have mentioned it to me as something I ought to read.  Some months ago I was having lunch with one of the partners at the tech agency that placed me in my current job.  We’d met for lunch a few times before, and he always ordered broccoli-cheese soup in a bread bowl.  But on this occasion, he ordered a chef salad.  When I mentioned the change, he said, “I don’t touch wheat anymore.  I read this amazing book called Wheat Belly about how bad modern wheat is for your health.  You might want to check it out.”

So I casually mentioned that Dr. Davis and I were seated at the same dinner table on the previous year’s low-carb cruise, that I’d roasted him and the other speakers during the pre-cruise dinner, that we correspond occasionally, and yes, I was familiar with his work.  That was kind of a fun moment.

Anyway, as Ellen DeGeneres would say, my point  — and I do have one — is this:  given the stellar success of Wheat Belly, Dr. Davis could have declared he’d done his part to save humanity, ridden off into the sunset and spent the rest of his life playing golf or whatever.  But he didn’t.  He kept right on researching and writing, apparently without taking a break.

Wheat Belly Total Health, his latest book, isn’t Wheat Belly Lite or Wheat Belly Rewarmed.  Most of what I read in the 300-plus pages was new information not found in Wheat Belly.  (As usual with my busy schedule, I didn’t finish the book until after it was released, so pardon the late review.)

Well, okay, there’s still some persuading going on in Part One of the book.  But it comes in the form of Ladies and gentlemen of the jury, in addition to all the crimes we’ve already attributed to this dastardly cereal killer, we now have evidence of many, many more.

Here’s an example from the second chapter:

WGA [wheat germ agglutinin] also mimics the effects of insulin on fat cells.  When WGA encounters a fat cell, it acts just as if it were insulin, inhibiting activation of fat release and blocking weight loss while making the body more reliant on sugar sources for energy.  WGA also blocks the hormone leptin, which is meant to shut off appetite when the physical need to eat has been satisfied.  In the presence of WGA, appetite is not suppressed, even when you’re full.

What a bargain: high blood sugar provoking high insulin, plus a lectin that acts like another dose of insulin, plus a short-circuiting of the “I’m full” signal.  Betcha can’t eat just one.

When I read the Perfect Health Diet book, I was impressed partly because Paul Jaminet was the only diet-and-health guru I knew of who addressed the importance of a healthy gut microbiome.  I can now add Dr. Davis to that list.  Wheat Belly Total Health includes quite a bit of information on gut bacteria and how to properly feed them:

Over the last few years, there has been a new scientific appreciation for the composition of human microbiota.  [Yeah, it’s new.  My spell-checker doesn’t even recognize “microbiota.” – TN]  We know, for instance, experimental animals raised in an artificial sterile environment and thereby raised with a gastrointestinal tract that contains no microorganisms have impaired immunity, are prone to infections, are less efficient at digestion, and even develop structural changes of the gastrointestinal tract that differ from creatures that harbor plentiful microorganisms.  The microorganisms that inhabit our bodies are not only helpful they are essential for health.

Care to guess whether wheat and other cereal grains are good or bad for your gut flora?  The irony is that we’re told to eat those healthywholegrains because they contain fiber.  Our gut bacteria feed on fiber – but not the fiber you get from a bowl of whole-grain cereal:

We are given advice to include more fiber, especially insoluble cellulose (wood) fibers from grains, in our diets.  We then eat breakfast cereals or other grain-based foods rich in cellulose fibers, and lo and behold, it does work for some, as indigestible cellulose fibers, undigested by our own digestive apparatus as well as undigested by bowel flora, yield bulk that people mistake for a healthy bowel movement.  Never mind that all of the other disruptions of digestion, from your mouth on down, are not addressed by loading up your diet with wood fibers.

After recounting the damage grains (especially modern wheat) can do to our guts, brains, hearts, sex hormones, thyroids, etc. in Part One, Dr. Davis moves on to his prescription for a health-enhancing diet in Part Two, Living Grainlessly: Restoring the Natural State of Human Life.

Grains can be addicting because of the opiate-like effects in the brain, so the first chapter in Part Two offers strategies for easing the withdrawal symptoms:  choosing a non-stressful time to ditch the grains, drinking enough liquid, getting enough fat and salt in the diet, possibly taking some supplements such as magnesium.  But most of Part Two is about which foods to eat and which to avoid.  The foods to eat include those that feed the good gut bacteria:

An emerging role is being recognized for so-called “prebiotics.”  These fibers, such as fructooligosaccharides and inulin from sources such as tubers and legumes, are indigestible by humans but digestible by bowel flora, which convert these fibers to short-chain fatty acids such as butyrate.  Butyrate is proving to play an essential role in maintaining a health intestinal lining, including repair of “tight junctions” between intestinal cells disrupted by grain consumption.  This repair restores normal barrier functions against undesirable components from other bacteria and reduces colon cancer risk.

So Dr. Davis is on board with the benefits of fiber and resistant starch from foods like tubers, but he doesn’t consider those benefits an invitation to eat mashed Russet potatoes.  He makes the same point in the book that I made in a recent post:  yes, your paleo ancestors ate ground tubers, but those tubers were tough and fibrous.  They’re not the metabolic equivalent of a low-fiber white potato mashed with cream and butter.

He still cares very much about avoiding glucose spikes, so unlike Paul Jaminet, Dr. Davis recommends a low-carb diet that limits the starches – 45 grams or so per day of non-fiber carbs, spread over three meals.  But unlike the early version of the Atkins diet (at least as perceived) the diet Dr. Davis recommends isn’t all meat, eggs and cheeses with a green salad thrown in.  He’s adamant about feeding the gut bacteria.  So he recommends raw potatoes, green bananas, legumes in small portions, and lots of high-fiber vegetables – some cooked, some raw, some fermented.  Everything he recommends is of the real-food variety; no processed foods, whether or not they contain grains.

Ditching the grains and switching to a whole-foods, grain-free diet is a huge step.  But in Part Three of Wheat Belly Total Health, Dr. Davis makes a crucial point:  yes, giving up grains halts the assault on our health … but that alone, or even combined with a good diet, may not be enough to fully recover our health.  Repair and rebuilding can take some focused effort.  That’s what Part Three is about.

Not surprisingly, restoring gut health is a big part of the process, and Dr. Davis recommends some specific probiotics to repopulate microbiomes that are all out of whack thanks to years of grains and other junk foods.  He also recommends (depending on the reader’s current health status) a list of supplements ranging from vitamin D to iodine.

The final few chapters deal with metabolism, weight loss, hormones and thyroid health.  There are descriptions of the lab tests doctors typically order for various metabolic conditions (including thyroid disorders) as well as explanations of what all those numbers mean.  (As many of you know by now, it’s not always a good idea to count on your doctor to interpret lab tests for you.)

In addition to being a dogged researcher, Dr. Davis is a talented writer.  His sentences flow, he injects humor throughout the book, and he explains concepts clearly.  In spite of the wealth of information — much of it dealing with biochemistry — I never found myself having to re-read a paragraph to grasp the meaning.  Doctors could learn a lot from this book, but it’s intended to consumer-friendly, and it is.

I interviewed Dr. Davis on camera during the 2012 low-carb cruise.  Some of that interview ended up in the Directors’ Cut version of Fat Head, and I’ve been saving the rest for the DVD companion to our upcoming book.  Wheat Belly Total Health contains so much new information, I kept thinking I wish I had him on video saying this stuff while reading it.

Well, it so happens I’m driving to Chicago this weekend to hang out with some old friends (and yeah, we’re all old now).  That’s been on the schedule for months.  It also so happens that Dr. Davis lives near Milwaukee, which is a reasonable drive from Chicago.  So I figured what the heck and emailed to see if was in town and available for another interview.  Yes and yes.

So I’ll be gone for the next few days, spending much of the time in my car or otherwise disengaged from the internet.  I’ll answer comments when I can, but don’t be surprised if they sit there for a day.

When we scheduled the interview, Dr. Davis suggested we head out for lunch afterwards.  I’m looking forward to that — and I’m pretty sure we won’t be visiting the Olive Garden for bread and pasta.