Here are a couple of emails I received recently:

I started at 565 lbs. — so close to putting a bullet in my brain. It seems like a lifetime ago.  Finally understanding the why of me being fat has made all the difference in my life. The guilt is gone, the food binges gone, the sugar cravings completely gone. I have adopted low carb as a lifestyle forever. I will never look back at what I turned myself into. I will only keep going forward with the new me. 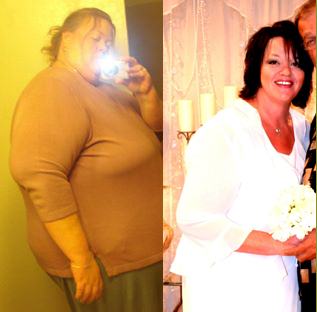 I’m floored, Gretchen.  That is one of the most amazing transformations I’ve ever seen.  Congratulations.

I wanted to take a moment to let you know how much you have changed my life.  I apologize for the length of this email, but there is so much to say — and I’m pumped up on Bulletproof coffee.

About 3 years ago, I saw Fat Head for the first time.  I had no idea what I was in for – I just hoped to see a rebuttal to Super Size Me, because that movie infuriated me.  Not for the reasons of the general population, though.  It made me mad because I was doing EVERYTHING “RIGHT” (according to conventional wisdom) and weighed 320 lbs. — and I NEVER ate at McDonalds!

I had tried everything.  Nutrisystem, Jenny Craig, Weight Watchers, starvation, grapefruit, “calorie negative,” multiple shakes, Phentermine, and that horrible pill that makes you poop yourself.  I tried Atkins for a while in the mid-90’s but in the back of mind I believed that it was dangerous, so when I crumpled over my washing machine one day, sobbing for a piece of bread, I gave up.  I eventually decided that Gastric Bypass was my solution.  However, my insurance would only cover for a specific BMI, and I was a few points short.  I brilliantly decided to GAIN up to that mark so that I could have the surgery.  As life and Murphy’s Law goes, in the couple of months that it took me to meet that mark (plus some for good measure) my insurance stopped covering the procedure entirely.

Then I saw Fat Head and a lightbulb went off in my head.  I watched it several more times.  I shared it with my family.  Then I went to the Fat Head website and saw an ad for a T-shirt that said “Wheat is Murder — Go Paleo!”  I thought, “What’s Paleo?”  My research began.

It was a trial and error process for some time.  I was so brainwashed with conventional wisdom that it was hard to forget everything I had lived and breathed for decades, even though those decades had been tragically unsuccessful, soul-crushingly frustrating, and criminally misinformed. And yet, in a year, I lost 100 lbs.  And I STILL wasn’t entirely convinced!  I lived a second year on the “80/20” program, which in retrospect was probably more like 50/50.  I felt pretty good, but was torn between “reach your goal” and “…but it tastes so good!”  I didn’t gain, but I didn’t lose any more, either.  I was focused on weight loss instead of health — and MAYBE losing 1/2 a pound today always lost out to “ooh, cinnamon rolls!”  Then I read Wheat Belly and my focus changed.  I realized I was poisoning myself.  And my kids.

I shared my new realizations with my incredibly supportive and long-suffering husband.  We discussed it over an entire week, and decided we were going to make the real commitment to health.  We were terrified how our kids would respond.  I was the mom who made elaborate birthday cakes — because that meant “See how much I LOVE YOU!”  Would they feel unloved when I said “no more birthday cakes”?  The idea made me cry.  We sat the kids (14, 12, and eight) down, explained our findings, told them that we loved them too much to poison them anymore, and told them to expect some withdrawals.  Guess what?

They never missed a beat.

We took sugar, grains, and processed food out of our home in one fell swoop.  I walked on eggshells (and feeding my family a dozen eggs a day, there were plenty of them!) waiting for the complaints, the withdrawals, the “I HATE YOU’s”  They never came.

In the last 6 months since this switch, let me tell you what did come.  My middle son (12), always the chubby couch potato with mom’s genes, lost 20 lbs. and was never hungry or unhappy.  It just fell off while none of us were really paying attention.  My oldest son (14), the wall-puncher with rage issues and who could only communicate by whining, mellowed.  The rage is gone.  He is now the most helpful, considerate, FUNNY kid you would ever meet.  The boys, who used to fight like cats and dogs, never fight anymore.

Our daughter (eight) probably struggles the most.  She is the social butterfly, so she’s always going to one function or another, spending the night with friends, and eating what they serve.  We don’t “forbid” this (obviously we can’t), but do try to point out when she has eaten “things we don’t have in our house” and has mood swings.  To us, it is glaringly obvious.  Oh, and that formerly chubby 12-year-old, turns out, is kind of an amazing soccer player.  The kids who used to have cereal or Pop Tarts for breakfast and the “nutritious” hot lunch at school would come home famished and cranky.  They would consume bags of potato chips, bottles of juice, and more Pop Tarts before dinner.  And then dessert.  Now they’re rarely hungry.  They don’t run for the pantry when they come through the door.

But that’s not all.  My husband and I are better parents.  We’re more patient.  Things roll off our backs with ease.  There are no more emotional outbursts from any of us.  My husband, who was never really overweight, has toned up, and the sinusitis that plagued him constantly has cleared up.  And me?  I’ve lost another 20 lbs, which is what prompted me to write.  I reached a huge milestone yesterday — I dropped below 200 lbs.  I wept.  For more than half my life, I thought I’d never see that “1” on the scale ever again.  I still have a way to go, and I know I’ve abused my metabolism so much that it will not be immediate.  But I also know I am SO much healthier. Even on days I don’t feel it in myself, I look at my family and know our lives have changed for the better in a million ways.

And I have you to thank for that.  For putting me on the right path, even though I learned slowly how to walk it.  And for sparing my kids a lifetime of the suffering I knew.  I can never thank you enough.  Just know that you HAVE changed the world, at least for us.

Believe me, Kelly, you did thank me enough.  And no need to apologize for the long email.  Letters like yours put a lump in my throat.

97 thoughts on “Letters From Viewers”