Here we go again with the latest “Meat Kills!” study.  You may have already seen it reported in the news with headlines like Vegetarians cut heart disease risk. Here are some quotes from that article:

Vegetarians are nearly a third less likely than meat-eaters to die or be hospitalized from heart disease, British researchers report this week in another study supporting a plant-based diet.

Vegetarians have lower blood pressure and cholesterol levels, weigh less and are less likely to have diabetes, as well, the researchers report in the American Journal of Clinical Nutrition.

The study, which covers 45,000 people over an average of 11 years from the 1990s through 2009, shows that vegetarians were 28 percent less likely to develop heart disease over that time.

Well, that’s it, then.  Drop the burger, pick up the tofu meat substitute, and save your heart.

“The results clearly show that the risk of heart disease in vegetarians is about a third lower than in comparable non-vegetarians,” said Tim Key, deputy director of the Cancer Epidemiology Unit at the University of Oxford.

The researchers said they accounted for age, smoking, drinking, exercise, educational level and socioeconomic background in making their calculations. Over the 11 or so years, 1,235 of the volunteers were diagnosed with heart disease, and 169 died of heart disease – the No. 1 cause of death in both Europe and the United States.

In the disclosures section of the full study, Tim Key (quoted above) is listed as a member of the Vegetarian Society, United Kingdom.  That makes me a wee bit suspicious … although Chris Gardner of Stanford is also a vegetarian, and he conducted the clinical trial of four different diets that found the Atkins dieters lost the most weight and showed the greatest improvements in their cardiovascular risk factors.  Dr. Key isn’t necessarily biased just because he promotes vegetarian diets.

So let’s look at this particular study and ask ourselves some Science For Smart People questions:

A: It’s an observational study based on questionnaires and medical records.  We can’t make conclusions about cause and effect from observational studies, but at least in this case the researchers aren’t asking the study subjects to accurately remember everything they ate during the past several years.  Most people can surely give an accurate answer to the question “Have you been a vegetarian for at least the past five years?”

That being said, comparisons of vegetarians versus non-vegetarians are always likely to produce skewed results for the simple reason that vegetarians tend to be more health-conscious than the population as a whole.  That means they’re different in all kinds of ways.  Not eating meat is just one of them.

Q: Did the researchers control their variables?

A: Not really, no.  In the full text of the study, the researchers admit that the participants are not a representative sample of the British adult population.  In fact, both the vegetarians and non-vegetarians in the study population had lower-than-usual rates of heart disease.  Then there’s this little issue:

Risk factors such as hypertension, hyperlipidemia, and diabetes may be mediating factors through which vegetarianism affects the risk of IHD; therefore, the analyses were not adjusted for these variables.

In other words, since we believe meat-eating causes hypertension, hyperlipidemia and diabetes, we didn’t adjust for any of them.  When I read that sentence, I scoured the study to see if rates of diabetes were reported.  Yup … and the non-vegetarians (let’s just call them meat-eaters from here on) had more than double the rate of diabetes.

Now … since diabetics are three times more likely to die of heart disease than non-diabetics, do you think maybe we have a confounding variable here?  If you believe eating meat causes diabetes (as the vegetarian researcher probably does), then yes, you could choose to ignore that as a variable.  But if you believe diabetes is caused by excess sugar consumption, you can’t.

Since clinical studies have shown that low-carb, meaty diets can control and often reverse diabetes, I seriously doubt eating meat causes diabetes.  So what we’re likely seeing here is that the vegetarians consume less sugar than the meat-eaters – once again, comparing health-conscious people to the population as a whole.

Then there’s the age problem.  Here’s the breakdown of the study participants with their average ages at the time they were enrolled:

The researchers compared their medical records 11 years later.  At that point, the average meat-eater was 58 years old and the average vegetarian was 50 years old.  Now take a look at the chart below, which shows CDC figures on heart-disease deaths rates by age bracket. 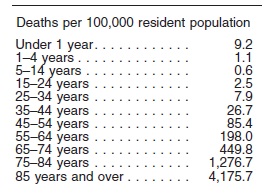 Ahhh, but the researchers assured us they adjusted the data for age, gender, BMI and smoking status.  Perhaps, but I have my doubts.  Those “adjustments” are where a lot of mathematical manipulations occur, as Dr. John Ioannidis has pointed out in his criticisms of observational studies.

Here’s part of the reason I have my doubts:  in the study, the researchers made this statement:

On the basis of the absolute rates of hospitalization or death from IHD, the cumulative probability of IHD between ages 50 and 70 y was 6.8% for nonvegetarians compared with 4.6% for vegetarians.

Hmmm … the CDC chart shows heart-disease deaths more than doubling as we move from one age bracket to the next (an increase of 131%), yet our older meat-eaters were just 32% more likely to have heart disease than their younger vegetarian counterparts, according to the study.  Something doesn’t feel right here.  Given the difference in average age, the difference in death rates in the non-adjusted data ought to be more dramatic.

Oh, but wait … if you read the study, the researchers weren’t comparing death rates.  They were comparing a diagnosis of heart disease – a combination of deaths chalked up to heart disease and heart-related problems such as angina.  In fact, of their 1,235 medical data points, just 169 were actual heart-disease deaths.  Which leads me to our next question:

Q: Is there any important data that seems to be missing?

A: Oh, you betcha.  The researchers had medical records for diagnoses of heart-related problems, they had medical records for heart-disease deaths, they knew who was and wasn’t a vegetarian, and they dutifully reported the differences in all heart-related problems combined for meat-eaters versus vegetarians … and yet stunningly, they didn’t report the difference in death rates – not for heart-disease deaths, and not for deaths from any cause.

Never fear.  This isn’t the first time these researchers dug into the data they collected for the purpose of publishing a paper.  Here’s the conclusion from another study using the same dataset titled Mortality Among British Vegetarians:

The mortality of both the vegetarians and the nonvegetarians in this study is low compared with national rates. Within the study, mortality from circulatory diseases and all causes is not significantly different between vegetarians and meat eaters, but the study is not large enough to exclude small or moderate differences for specific causes of death, and more research on this topic is required.

In other words, We’d like more funding so we can keep torturing the data until it tells us that eating meat will kill you.