An article with the title No Room for Complacency in Face of Spanish CV Paradox showed up on Medscape today.  Let’s take a look at some choice bits:

The first study to report population-based data on cardiovascular health across an entire European country has found that the nation in question, Spain, is not performing particularly well and in fact is on a par with the US.

Boy, I’m sorry to hear the Spanish aren’t performing particularly well when it comes to cardiovascular health.  I spent part of my honeymoon in Barcelona and loved the place … the scenery, the food, the friendly people.  If they’re on a par with the U.S., they must have nearly as many people dropping dead of heart attacks as we do.

Surveying a cross-section of Spanish adults, Dr Auxiliadora Graciani (Universidad Autonoma de Madrid, Spain) and colleagues measured “ideal cardiovascular health”–as described by the AHA–and found that only 0.2% of the 11, 408 subjects attained ideal values for all seven CVD health metrics: nonsmoker, body-mass index (BMI) <25 kg/m2, physical activity at goal, diet consistent with recommendations, untreated cholesterol <200 mg/dL, untreated BP <120/80 mm Hg, and untreated fasting glucose <100 mg/dL in the absence of clinical CVD and diabetes. Of those surveyed, 3.4% attained ideal values for at least six of the metrics and 15.4% for five, they note in their report published online January 8, 2013 in Circulation: Cardiovascular Quality and Outcomes.

Wow, that’s just awful.  Barely one-fifth of one percent of the Spanish adults meet the American Heart Association’s ideal values for cardiovascular health.  And I thought the people I saw falling down in Barcelona were just party animals who’d had too much sangria.  Now I realize they were having heart attacks.  In retrospect, I feel guilty for clapping.

“This is the first study to report information on cardiovascular health from Spain, a European country with low coronary heart disease mortality compared with many Western countries,” observe the authors. However, the level of cardiovascular health in Spain “is as low as in the United States, primarily due to poor lifestyles, especially lack of ideal diet,” they note.

Um … uh … but … did I read that correctly?  The Spanish have a low level of cardiovascular health but also low coronary heart disease mortality?  Isn’t that a bit like saying they’re in poor physical condition, but can run for miles and bench-press their own body weights?  I don’t know about these researchers, but I define “good cardiovascular health” as “not dying from cardiovascular disease.”

Although the CHD mortality rate is low in Spain, recent research shows the prevalence of angina there is high, suggesting that atheromatous plaques are stable, the doctors say. Research is needed as to why these plaques do not rupture, translating into a high incidence of acute MI, as is seen in other countries, they state.

Oh, okay.  Got it.  The researchers are speculating that thanks to their stubborn refusal to adopt the American Heart Association’s definition of good health and a good diet, the Spanish actually do have lots of plaque buildup … but for some reason, plaques don’t rupture in Spain.  Must be the weather.  I’m surprised they didn’t say it’s because the Spanish drink wine.

This “paradox” of low CHD mortality and poor cardiovascular health in Spain could be explained by several things other than traditional CV risk factors, such as sedentary behavior, specific dietary components (eg, wine consumption and the Mediterranean diet), psychosocial factors (such as family support), and quality of medical care, among others, say Graciani et al.

I see.  So the Spanish suffer from a “lack of ideal diet,” they have poor cardiovascular health because they don’t meet the American Heart Association’s criteria, but they don’t die from heart attacks because they eat a Mediterranean diet.  They have a lousy diet, but their diet saves them from heart disease.   Oh, and because they drink wine.  And because of the quality of medical care.  I guess that means they get treated for their high cholesterol.

And because lifestyles appear to contribute far more heavily than biological factors to poor cardiovascular health in Spain, there is a great need to strengthen the role of public-health efforts in the management of CVD there, they observe. Health services also need to improve, they add, noting that five out of every 10 people with elevated cholesterol are not being treated, and half of those with BP >140/90 mm Hg are unaware of this.

I want to know how any researcher can make those arguments in a paper without reading what he wrote and thinking, “Wait a minute … I sound like a flippin’ moron here.”

Let’s look at a graph from one of the American Heart Association’s own documents.  This shows rates of death from cardiovascular diseases (heart attack and strokes combined) for men in several countries, ranked from worst to best. 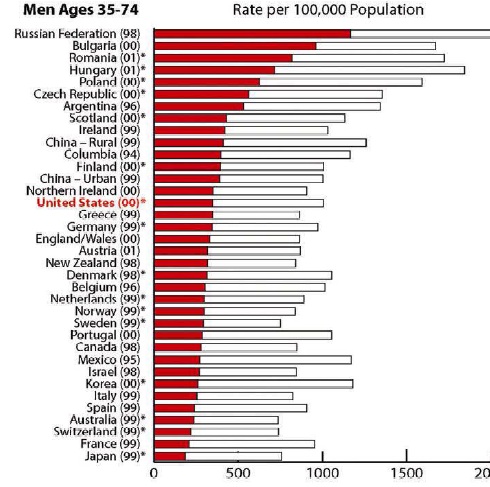 Notice Spain down there near the bottom?  Notice France down there below Spain?  Now take a look at the top of the chart, where you’ll find Russia with the highest rate of cardiovascular deaths.

And so the paradoxes just keep on coming …

106 thoughts on “The Spanish Paradox”