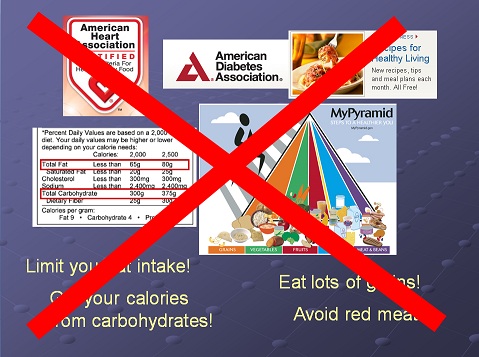 In the speech I gave at the Office of Research Integrity conference, I listed this as the first ingredient for creating a crisis in nutrition:

Today I saw another example of that ingredient in action.  A co-worker who heard from another co-worker that I know a thing or two about nutrition and health sent an email asking if he could drop by for a chat.  When we talked, he explained that he’s confused because his latest blood-work results aren’t good, even though he’s following the kind of “healthy” diet his doctor told him he should.

We’ll look at the results in a moment.  First let’s look at his typical diet, which he printed out for me.

Now there’s a diet that would make your average doctor or dietician stand up and cheer!  Mostly plant-based, egg whites instead of whole eggs, fat-free milk instead of whole milk, very low in fat, devoid of red meat, lots of vegetables, and high in “good” carbohydrates:  oatmeal, orange juice, fruit, rice, whole-wheat bread, whole-wheat tortillas, and spaghetti.  This is the kind of diet the USDA believes everyone should be eating — and by gosh, we probably would if only we weren’t so gluttonous …  or so stupid that the Food Pyramid confuses us.  It’s also the kind of diet the USDA is pushing in schools.

Now let’s look at a couple of my co-worker’s lipid panels.

Thanks to that diet full of “good” carbohydrates and low in fat, my co-worker’s triglycerides/HDL ratio is 4.42.  And by the way, he’s a lean guy:  5’5”, 142 pounds.  Nobody can blame these lousy results on overeating or being overweight.  As he told me, his doctor is a bit frustrated as well, seeing those lousy numbers in a lean guy who eats a “healthy” low-fat diet.

In my speech, I talked about a common sequence in the treatment of type 2 diabetes:  a doctor tells a patient to start following the American Diabetes Association diet, the patient does, his blood sugar continues to spiral out of control, so the doctor prescribes a drug.  Frankly, I don’t know how any doctor with a functioning brain can recommend the ADA diet and then be surprised at the lousy results.  A diet based on foods that are rapidly converted to glucose raises fasting glucose levels?  Duh!

One of the most common triglyceride myths is that eating fats increases triglyceride. But that’s only a half-truth, since fats do indeed increase triglycerides-but only if triglycerides are measured after eating (i.e., in the postprandial period). The real story is that fats in the diet decrease triglycerides-at all other times except after a meal. The higher the fat content of your diet, the lower your triglycerides will be in a fasting blood draw. This has been well-established in numerous diet trials comparing low-fat with low-carbohydrate diets.

The human body has little capacity to store carbohydrates. So it needs a method to store the energy of excessive carbohydrates. It does so by converting carbohydrates to triglycerides, which are then converted to fat, especially the fat in your abdominal region (visceral fat).

Not surprisingly, the quickest way to reduce high fasting triglycerides is to cut back on the carbohydrates.  The easiest way to raise HDL is to eat more fat (natural fat, that is).  But since most doctors don’t know that, they see someone with a lipid panel like my co-worker’s and immediately recommend a low-fat diet with lots of fruit and whole grains.  In other words, they hand out dietary advice that doesn’t work.  When the dietary advice fails, as it did for my co-worker, they reach for the prescription pad.

That’s why we have a crisis in nutrition.  That’s why the advice the “experts” are handing out has to change.