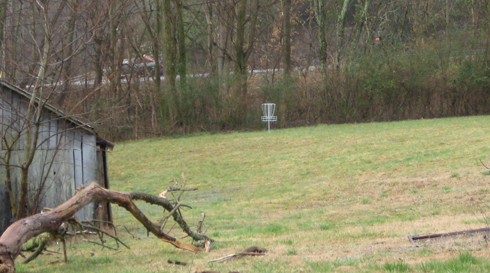 When we still lived in a subdivision, part of my exercise program was to take long walks at night and listen to audiobooks or podcasts.  The other part was lifting weights once or twice per week using Fred Hahn’s Slow Burn method.  I still do that.

I’ve given up the long night-time walks for a variety of reasons since moving to the farm.  I don’t work at home anymore, so I can no longer take an evening walk that ends around midnight and then just sleep until my body decides to wake up.  I’m up early these days (for me, anyway) and off to work in downtown Nashville.  The commute is now my audiobook and podcast time.

Even if I could sleep in, there’s no place around here I’d feel safe walking in the dark.  The subdivision had sidewalks and streetlights, with very little in the way of wildlife.  Out here, there’s a good chance I’d step into a hole, trip over a rock, or end up with a surprise introduction to a critter I’d rather not meet … like a snake.

After giving up on the night-time walks, my plan was to get some paleo-type exercise by sprinting around our land.  An unrelated plan was to create a Frisbee golf course around the property for weekend entertainment, which I did.  I started out with three holes in one of the front pastures, but later expanded the course (with my lovely wife’s encouragement) to nine.  Instead of setting up nine separate targets, I elected to go with six and create the extra holes by approaching three of the targets from different directions.  You can see the official course layout below.  The second and ninth holes require throwing between the trees and over the creek. 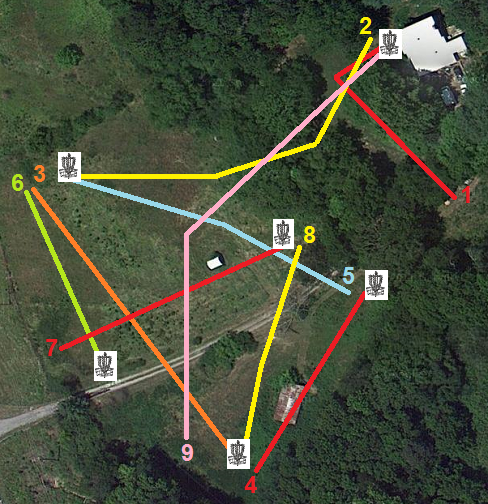 While playing last weekend, a thought occurred to me:  You know, if you sprinted to your next shot instead of walking, this would be pretty decent exercise.  Running, throwing, trying to hit a target … if you were half-naked and had a bone stuck through your nose, this would almost resemble a paleo hunting expedition.  Let’s just call it play-leo exercise. 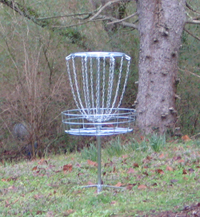 So that’s my excuse now for running around the land and throwing Frisbees at targets.  (If you’re not familiar with Frisbee golf – or Disc Golf, as it’s properly called – you sink a “putt” by landing the disc in a basket.  If you hit the chains, that will usually do the trick.)

It actually is good exercise.  There’s a lot of slope in the land, so by the time I’ve sprinted after my shots for nine holes, I’m pretty winded.  I usually reward this effort by playing another nine holes at a leisurely pace.  By the time I play 18 holes, I’ve walked or sprinted several miles.

Yes, I understand your doubt.   You probably looked at the course diagram above and correctly concluded that those distances can’t possibly add up to several miles.  But here’s where you miscalculated:  you assumed I’m blessed with enough athletic ability to throw a Frisbee more or less on a straight line.  Sadly, that’s not the case.  Below I’ve recreated a typical flight pattern for my shots on the first three holes: 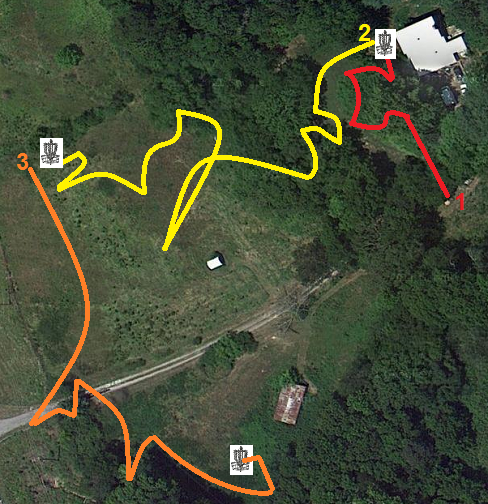 The sharper angles are where I either hit a tree, have to toss out from behind a tree, or hang onto the Frisbee too long and throw it nearly sideways.

Now multiply by 18 holes … then try to tell me I don’t walk several miles in a typical round.

Years ago I read that Willie Nelson had a nine-hole golf course built on his property.  I hoped someday I’d be able to do the same.  I guess I succeeded in a manner of speaking.

Frisbee golf is different in several ways, of course.  There are no fairways and greens to maintain, which is nice.  The discs (there are drivers, mid-ranges and putters) are far less expensive a set of decent golf clubs, and unlike golf balls (which are engineered specifically to find their way into deep grass, bushes or leaves), they’re hard to lose.   So far I’ve only lost one disc, and that was temporary.  After searching all over the yard for it, I finally spotted it overhead, stuck in a tree.  I’ve never lost a real golf ball in a tree as far as I know.

Those differences aside, I’m finding that Frisbee golf is indeed a lot like traditional golf and every bit as enjoyable … same basic rules for scoring, much of the same terminology, and many of the same principles, such as:

Alana hasn’t shown any interest in the game, but Sara loves it.  Pretty much anytime I suggest we go hit the course, she’s up for it.  She’s even taken to playing after school now and then when I’m not around.

Good fun, good exercise, an outdoor sport I can play with my daughter.  The only downside is knowing that once Chareva gets the farm up and running, I’ll probably be banking my shots off a few chickens.