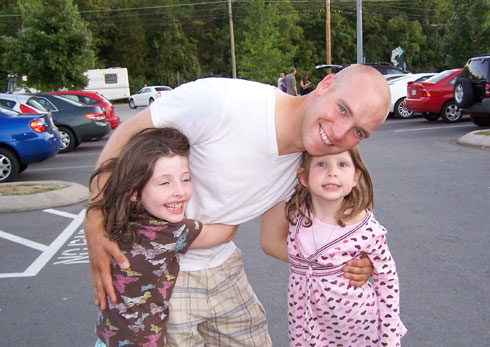 The handsome young man you see in the picture above is Grant Naughton, the Older Brother’s middle son. If his name sounds vaguely familiar, it’s because he’s listed in the credits for Fat Head as a camera operator. When he visited us in California a few years ago, Grant volunteered to do some shooting for me, since he knew I was less than happy with the footage I was getting from a film-school intern whose courses apparently didn’t include basic lessons such as “Don’t let the top of the frame cut off your subject at the nose.” (I had to toss most of his footage.)

Grant shot several scenes for me, including me hanging around in front of restaurants, the interview with my mom, and me asking the clerk at the drive-up window if anyone would force me to eat french fries.

Grant’s always been a sweet and funny guy. My girls adore him. He’s now also officially the toughest S.O.B. I know, since he just attended Ranger school and was among the 39% who survived the cut. The Older Brother and several other family members drove down to Georgia to attend his graduation and stopped by the mini-farm on the way back to get the “before” view.

The videos below provide a pretty good idea of what Grant just endured – in temperatures that exceeded 100 degrees most days. In addition to the usual training tortures, he ended up with a full-body case of poison ivy and was stung in the face by a hornet. But he refused to quit and is now the proud owner of a Ranger tab.