Wrong.  I weighed 155 pounds because I had a 35-inch chest, skinny arms, and skinny legs.  I also had a belly, love handles, and boy boobs.  I was a skinny-fat guy.

I occasionally played pick-up basketball (not especially well, mind you) with a classmate named John, who was on the football team.  John had six-pack abs, and the veins popped on his muscular arms and legs.  He was about 5’8” and weighed around 180 pounds.  That would put his BMI at 27.4, which would classify him as overweight.

If anyone had seen us side-by-side with our shirts off and was told John was overweight but I wasn’t, I’m pretty sure the reaction would’ve been a big chuckle.  BMI is laughable as a measurement of who’s fat and who isn’t.  Unfortunately, busybodies in government still take it seriously, including Michelle Obama:

In an exclusive post published on Shine today, First Lady Michelle Obama offers some advice, drawn from her own experience, about the Affordable Care Act and how parents can get the most out of visits to the pediatrician. One of her suggestions: Learn about your child’s BMI.

The First Lady was surprised to learn that her daughters’ BMI numbers were “creeping upwards.” “I didn’t really know what BMI was,” she writes. “And I certainly didn’t know that even a small increase in BMI can have serious consequences for a child’s health.

Yes, I remember how unhealthy my classmate John was, thanks to his high BMI … although now that I think about it, his height-to-weight ratio did cause some serious damage.  In a playoff game, a punt-returner from the opposing team neglected to call for a fair catch as John was bearing down on him.  A few seconds later, one of our players had recovered the fumble for a touchdown, and the punt-returner was flat on his back, unconscious.

A small increase in BMI does not produce serious consequences for a child’s health.  Getting fatter thanks to a lousy diet can certainly have serious health consequences.  Consuming a lousy diet without getting fatter can, too — just ask any of the thousands of skinny type 2 diabetics in the world.  When I was a senior in high school, I joined a Nautilus club and ended up putting on 10 pounds of muscle over the next several months.  My arms finally had a bit of shape to them, and my chest filled out.  My BMI went up, but I was healthier.

But as Dr. Susan J. Woolford explains, despite the medical jargon, BMI (Body Mass Index) is actually a very easy way to answer a very difficult question: Is my child overweight?

No, BMI is a very easy way to answer this difficult question:  What is the mathematical result of multiplying my child’s weight in pounds by 703, and then dividing that number by my child’s height in inches squared?  That’s all BMI will tell you.  The easy way to determine if your child is overweight is to look at him when he’s not wearing a shirt.  Is his belly protruding?  Is he developing love handles?  If so, he’s probably on his way to being fat.  If he’s got a flat belly with some definition around the abs, he isn’t.

If Mrs. Obama is going to start obsessing with her kids’ BMI scores, I feel sorry for them, but that’s her business.  Unfortunately, Mrs. Obama is now in charge of the latest federal effort to combat childhood obesity, which means she’s also making it her business to hand out advice to the rest of us.  Watch this interview with the chairwoman of Mrs. Obama’s taskforce:

So the taskforce is recommending the same old “eat less, move more, fill your plate with fruits and vegetables” blah-blah-blah nonsense.  It hasn’t worked for the past 30 years, but apparently it will work now.  Why? Because (as the First Lady explained) for the first time, they’re setting really clear goals and benchmarks!

Well, that ought to do it, then.  If the federal government says we’re going to reduce childhood obesity to 5%, then by gosh, it’ll happen.  I set a really clear goal of earning $500,000 this year.  I’m not actually doing anything to achieve that goal, but I’m pretty sure setting clear goals and benchmarks is all it takes.

The Healthy Food Financing Initiative will promote a range of interventions that expand access to nutritious foods, including developing and equipping grocery stores and other small businesses and retailers selling healthy food in communities that currently lack these options. Residents of these communities, which are sometimes called “food deserts” and are often found in economically distressed areas, are typically served by fast food restaurants and convenience stores that offer little or no fresh produce.

Part of the federal taskforce’s plan for “empowering” parents to make better decisions for their kids is to require schools to record and report BMI scores for schoolkids.  Fabulous.

“Hello, this is the nurse from Lakewood Elementary calling to let you know we’ll be measuring your child’s Body Mass Index tomorrow.”

“I don’t want you measuring my kid’s BMI.  It’s none of your business.”

“Oh.  Boy, I feel really empowered as a parent now.  Thanks for the call.”

Once schools start identifying kids with a high BMI, what exactly are they going to do about it?

“Gee, Nurse Finkelstein, what should I do?”

“Well, uh … get some exercise and then go eat your USDA-approved lunch.  I believe today’s menu features chicken nuggets, mashed potatoes, rolls, chocolate milk and some peaches in a sugary syrup.”

If Mrs. Obama is 1) convinced that BMI is a useful measurement, and 2) believes her task force knows enough about the biological mechanisms of weight gain and weight loss to justify making dietary recommendations and spending hundreds of millions of tax dollars to implement them, then here’s what I want her to do:

I don’t know Mrs. Obama’s BMI, but based on pictures of her, I’d be surprised if it’s 25 or below. 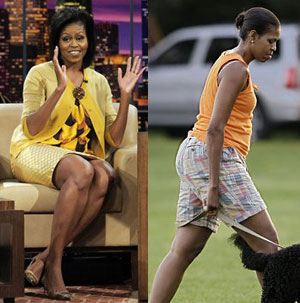 Don’t get me wrong … I think she has an attractive figure.  But she’s on the thicker, more muscular side of the curve, especially in the hips and legs, so it’s highly likely her BMI puts her in the overweight category.  I’d prefer she look at herself in the mirror, compare what her eyes are telling her with her BMI score, and then declare BMI a useless measurement.  But since she’s now extolling the virtues of BMI scores and supporting requiring schools to gather them, I want her to declare hers publicly.  Then I want her to follow the USDA dietary guidelines and show us how those guidelines helped her achieve a BMI of 24.  Prove the advice she’s handing out actually works.

If she does that, then she can worry about my kids’ BMI scores.