We’re back in Tennessee after spending most of the week in Chicago, where we celebrated our 10th anniversary.  On the drive home yesterday, we stopped to take a tour of a working dairy farm in Indiana as a bit of educational fun for the girls.  I’ll write about that later.  As for my own education, I learned that the three most annoying words in the English language are ROAD WORK AHEAD.

Orange cones aside, it was a fun trip for both us and the girls.  Sara and Alana went swimming every day, played tag and hide-and-seek with their cousins, rode on the “Iowa-Ashland” train line my father-in-law built around his property, and had their first experience eating burnt-marshmallow s’mores.  (In their opinion, the burnt ones taste best.) 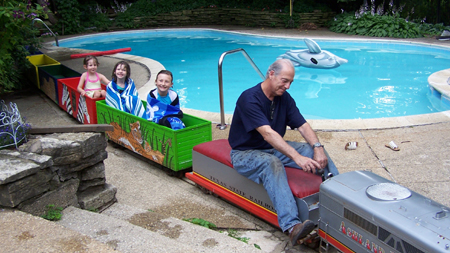 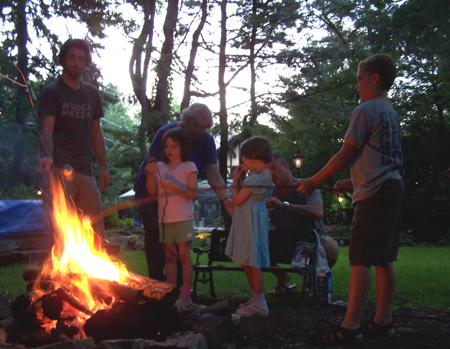 The picture below was taken inside church where we were married.  If that fabulous woodwork looks familiar, it probably means you saw the movie Home Alone.  The director, Chris Columbus, lives next door to my wife’s parents and used the church for the scene in which Kevin finally talks to the scary old man.

My wife’s mother planned our wedding for us, since we were living in Los Angeles at the time.  Ten years later, I’m still dazzled by the memories.  At one time, my mother-in-law sang in the Chicago Metropolitan Opera (she has an amazing voice), and she called upon some friends for the wedding.  I walked into the church to hear a handful of musicians from the Chicago symphony playing, while a baritone from the opera belted out a song that gave me shivers — and it wasn’t because of wedding jitters.

This was all a wedding-day surprise; she didn’t tell us everything she’d planned.  I remember looking around, wondering if I’d walked into the wrong wedding.  I didn’t sleep a wink the night before — every time I started to drift off, I snapped awake thinking, “Oh my god!  I’m getting married tomorrow!”  But the grandeur of the church and the music energized me, and I didn’t feel at all tired once the wedding began.

The next picture is of the girls, standing on the spot where Mommy and Daddy were married.  They are constantly demanding I tell them stories from my life, so now they have a visual to go with the wedding-day story.  (Their current favorite is the story about the floating hairball, which I recently recounted on my other blog as part of a longer post about my experiences with wasps.) 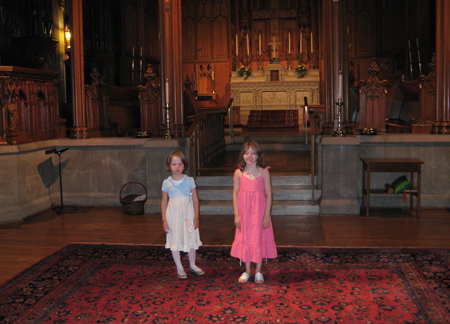 I didn’t exactly stick to a low-carb diet during the trip, but so be it.  For the night of our anniversary, I had planned to take my wife to the seafood restaurant where we had our second date.  Just one problem:  that restaurant doesn’t exist anymore.  So we ended up going to the Greek restaurant where we had our rehearsal dinner.  I’m sure it’s possible to order a low-carb meal in a Greek restaurant, but I was there to celebrate, so I enjoyed the works … lemon-egg soup, flaming cheese, spinach pie, moussaka, pastichio, lamb, stuffed grape leaves, wine, and a Greek liqueur after dinner, compliments of the house in honor of our anniversary.

As promised in an earlier post, I also indulged in a Giordano’s stuffed pizza during the trip. (If you’re going to break training for the sake of pizza, this is the one to choose.)  The picture below shows what an entire pie looks like.

People who’ve never tried a stuffed pizza often confuse it with deep dish.  It’s not the same thing.  Deep dish — even the legendary stuff from Uno’s — is “deep” because of the thick crust.  A stuffed pizza, on the other hand, consists of a thin crust on the bottom and another on the top, with a thick layer of ingredients in between, as you can see in the picture below.  It’s delicious hot with a cold beer, and even more delicious cold with a hot cup of coffee the next morning.  Skip the thick crust around the outer edge (which I do), and you’re eating way more meat and cheese than crust. 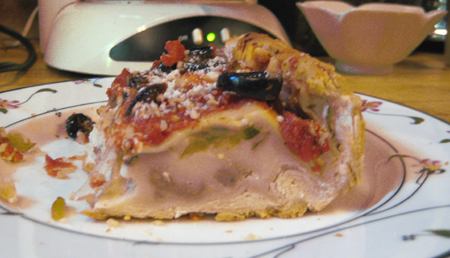 (By the way, if you ever want to try a Giordano’s stuffed pizza, they’ll make it, half-bake it, freeze it, and ship it to you.  Then you just finish baking it in your own oven.)

We don’t have a scale in the house, and I probably wouldn’t dare step on it for a few days if we did.  I enjoyed the bit of indulgence, but now it’s back to the meat, eggs, berries and vegetables.  After all, I don’t want my wife to start wondering why she married me.

32 thoughts on “Anniversary … And Stuffed Pizza”