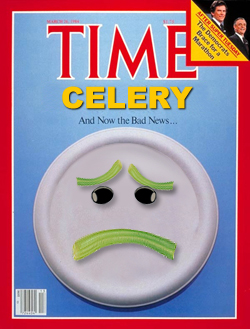 I have a fantasy in which I’m allowed to conduct a nationwide experiment lasting several years.  It would work like this:  First, I get to select a harmless food I don’t like very much and wouldn’t mind giving up.  I think I’ll go with celery.

Then, working in cahoots with several prominent health organizations, I get to convince the American public that my selected food causes premature death.  Given the current state of nutrition and health journalism, this wouldn’t be a difficult task.  We could just trumpet a few studies showing that 75% of all heart attack victims consumed celery in the previous year, for example.  Eventually the media would be full of headlines warning people to cut celery from their diets.  TIME magazine would run a major article titled Sorry, It’s True … Celery Is A Killer.   (Subtitle:  party trays will never be the same.)

Now for the really fun part … a dozen years or so later, I would conduct a large epidemiological study comparing celery consumption with death rates.  And I can already guarantee the result:  people who eat a lot of celery tend to die younger.  This would, of course, prove that celery is a health hazard, right?

Of course not.  All it would prove is that health-conscious people had heeded the warnings and were dutifully avoiding celery.  Or, to look at it another way, it would prove that people who choose to ignore the dire warnings about celery are what doctors call non-adherers … or what I call people who don’t give a @#$%.  It would prove absolutely nothing about the actual health effects of celery.

But that’s not how most of the public or (sadly) most health professionals would see it.  The health professionals would avoid the stuff and counsel their patients to do likewise, citing my study as proof.  CSPI would blitz the media with press releases warning about the high celery content of take-out Chinese food.  (A heart attack in box!)  Joy Bauer would demonstrate how to use carrots instead of celery to scoop up fat-free ranch dressing.

Finally, for the big punchline, I’d get to announce that the whole thing was a joke, preferably on national TV.  “Fooled ya, folks!  There is not and never has been anything dangerous about eating celery.  Ha-ha!”

But by then, no one would believe me.   I’d be accused of being a flack for Big Celery.  I don’t care … I don’t like celery anyway.

Okay, that’s my fantasy.  (And yes, you are allowed to make wisecracks at this point … something about the wild fantasies of a 51-year-old computer geek should do the trick.)  Now here’s why I thought of it again today:

Some of you are familiar with Jason Sandeman, the Well Done Chef, because he’s written a couple of guests posts to share his recipes.  Jason was recently diagnosed as a diabetic — first as a Type 2, but then as a Type 1.  Over the weekend, I asked how he’s adjusting.  He replied today:

I have impressed the doctors and the nurses with how fast I have gained control, mainly by ignoring their advice. I am sure it is well intentioned, but misguided … I was directed to this study by a “helpful” diabetes nurse.

The study the nurse wanted Jason to read (actually, she wanted him to read an article summarizing it) is one that came out a couple of years ago and was reported all over the media with headlines such as Seven or more eggs a week raises risk of death.  Several bloggers with functioning brains took it apart at the time (I wasn’t blogging yet), but it’s worth another look, if only because it’s a perfect example of how demonizing a food can lead to exactly the kind of associations my anti-celery campaign would produce.

The Harvard team studied 21,327 men taking part in the much larger Physicians’ Health Study, which has been watching doctors since 1981 who have agreed to report regularly on their health and lifestyle habits. Over 20 years, 1,550 of the men had heart attacks, 1,342 had strokes, and more than 5,000 died.

“Egg consumption was not associated with (heart attack) or stroke,” the researchers wrote. But the men who ate seven eggs a week or more were 23 percent more likely to have died during the 20-year period. Diabetic men who ate any eggs at all were twice as likely to die in the 20 years.

Okay, this study already has problems.  Why were we all told to avoid eggs?  Because they’ll give you heart disease, by gosh! And yet the authors noted that egg consumption was not associated with heart disease — just with premature death in general.  Hmmm … so how exactly are the eggs killing all those doctors?  Are the doctors spilling eggs on the floor, then slipping on them?

I looked up the full study and found other problems as well.  The egg-consumption figures were compiled from food questionnaires mailed at various intervals over the course of the study:  baseline, 24, 48, 72, 96, and 120 months.  Those questionnaires are notoriously inaccurate.

But let’s suppose the doctors reported their egg consumption accurately.  Doctors are, after all, more likely than most folks to think carefully about their diets … which leads to another flaw in the study:  the participants are doctors.  Most of this study took place after 1984, which is when TIME magazine scared the bejesus out everyone about cholesterol and doctors started telling their patients to cut back on cholesterol and fat.  So we’re looking at a population that’s probably a bit egg-phobic to begin with.  An editorial in the American Journal of Clinical Nutrition that accompanied the study pretty much says exactly that:

The egg intake pattern in this study population was extremely low: only 8% of participants were eating >= 1 egg/d. For comparison, 36% of the men in the Framingham study and 37% of men in a Japanese study with similar outcome assessments ate >=1 egg/d.

No surprise there:  doctors are far less likely than the rest of us to eat at least one egg per day.  That’s what they’ve been taught.  In fact, in the full text of the study, the authors stated that the median consumption of eggs among the doctors was one per week.

So … what kind of doctor ignores the advice — which has been shouted from the medical rooftops since at least 1984 — to cut back on eating eggs?  I can think of two kinds:

And wouldn’t you know it, that’s exactly what the study would suggest:

Men who ate the most eggs also were older, fatter, ate more vegetables but less breakfast cereal, and were more likely to drink alcohol, smoke and less likely to exercise — all factors that can affect the risk of heart attack and death.

Although the study didn’t mention it, I’ll bet you dollars to donuts the egg-eating doctors were also more likely to eat donuts and drink sodas.  I don’t know many people who drink, smoke, and avoid exercise but then avoid sugar because it isn’t good for them.

The “helpful” nurse no doubt wanted Jason to read the article because of this finding:

Among male physicians with diabetes, any egg consumption is associated with a greater risk of all-cause mortality.

To be fair to the researchers, they cited other studies that found zero association between egg consumption and premature death, and also mentioned the limitations of their own study.  Here’s an example:

The fact that our sample consists of male physicians who may have different behaviors than the general population limits the generalizability of our findings.

Our study has additional limitations. We cannot exclude unmeasured confounding or residual confounding as possible explanation of the observed positive association among diabetic subjects. In particular, we were not able to examine the effects of saturated fat, markers of insulin resistance, lipids, and other nutrients or relevant biomarkers on the observed association. While in our study, the lack of detailed dietary questionnaire prevent us from controlling for energy and other major nutrients, this was not the case in the Nurses’ Health Study and the Health Professionals’ Follow-up Study, where total energy intake was accounted for.

In other words:  We found an association — period.  We can’t actually explain it, because there were too many unmeasured or uncontrolled variables.  And by the way, several other studies found no such association. If you read the whole study, that’s the takeaway message.  But take another look at the headline and lead paragraph when the study was reported in the media:

Seven or more eggs a week raises risk of death

Men with diabetes who ate any eggs at all raised their risk of death during a 20-year period studied, according to the study published in the American Journal of Clinical Nutrition.

Doesn’t using the transitive verb “raise” make it sound just a wee bit like cause and effect?  You know, like a Boy Scout raising the flag?  Doing it on purpose and all that?

That’s the sorry state of health and nutrition reporting.  Which means my celery experiment would be a fabulous success … well, for everyone except the Chinese restaurants and the celery-farmers.