Last week, for the first time in years, we drove to grandma’s for Thanksgiving.  It was a welcome change. When we lived in California and flew home for holidays, we had to wake up at 5:30 a.m. or so, install the car seats in a taxi, spend nearly an hour just getting to LAX, haul the suitcases and car seats into the airport, check the suitcases, try to keep the girls amused for the next hour while waiting at the gate, then drag our carry-on luggage and the car seats onto the airplane.  Sometimes, depending on what flights were available, we’d have to change planes in Dallas or Denver, which meant lugging the carry-ons and car seats from the airplane, through the terminal, onto a shuttle, through another terminal, and onto another plane.

This time it was just a matter of tossing a couple of suitcases into the van and driving away. Along the way, we played songs on the car stereo and the girls sang along.  Sara, the six-year-old, has memorized the lyrics to “Farmer Tan,” “No One Loves You Any Better Than Your M-O-M-M-Y” and “Girls,” to name just a few.  (She was a little disappointed to learn that the diner in Pump Boys and Dinettes is called the Double Cup and not the Buttercup, which is what she’d been singing.)

Two hours or so north of Nashville, as we rolled past the steep hills and forests and lakes that surround the interstate, with gray and white clouds drifting through the blue skies, it occurred to me just how much I missed the Midwestern scenery during my decade in the converted desert called Los Angeles.  These are the images that were imprinted into my brain during my youth and young adulthood.  This is home.  I even enjoyed the feeling of a cold wind tugging at my sleeves when we stopped for gas.

The trip north to grandma’s took about seven hours.  The return trip on Sunday was a bit more adventurous.

As we left Illinois, the girls remembered they’d signed a deal to write a travel book titled Bathrooms of the Midwest and were seriously behind on their research.  Thinking quickly, they counter-synchronized their bladders and colons to ensure that I’d be exiting the highway at 40-minute intervals in search of a bathroom.

Bladder and colon are layman’s terms.  Alana, my four-year-old, reviewed some biology texts when I wasn’t looking and informed me that the proper term for that general area of the body is patoomba.  During the many side-trips when Sara went scampering off to a bathroom to take notes, I encouraged Alana to do the same, stupidly thinking this would enable me to cover perhaps 80 miles before stopping again.  “No, thank you,” she replied.  “There’s nothing in my patoomba.”

Forty minutes later, the patoomba would be in full crisis mode, and I’d be looking for the next exit.  Thanks to the many stops, I passed the same Winnebago at least eight times between Illinois and Tennessee.  Eventually, the driver began flashing his lights as a greeting.

We also stopped for meals, of course.  At a Wendy’s in central Illinois, at least half the adults were noticeably obese.  When I asked for my double bacon cheeseburger without a bun, conversation around the room ceased.  Lowering my voice in the now-hushed room, I also requested an iced tea without sugar — the tea dispenser was clearly marked “Sweet Tea.”  The clerk disappeared into the back of the restaurant to fill the cup.  I’m guessing they keep a jar of instant tea back there. By contrast, when we stopped at a McDonald’s in Kentucky (after the girls literally began chanting “McDonald’s!  McDonald’s!” from the back seat), hardly anyone looked overweight.  Go figure.

Also in Kentucky, a mere 90 miles from home sweet home, we hit traffic that made me think I’d dreamt the entire move to Tennessee and was now waking up in Los Angeles.  As it turns out, someone in the Kentucky highway department decided Thanksgiving weekend would be a good time to block one lane on Interstate 24 for about a quarter of a mile.

I’ve never understood why there aren’t any signs about 10 miles ahead of construction zones, warning drivers they’ll soon need to get into the right or left lane.  Traffic is flying along with plenty of room between vehicles, which means in theory we should all be able merge into one lane ahead of time without a panic.

Instead, traffic comes to a halt as everyone (well, almost everyone) takes turns squeezing into the one open lane at the last possible moment.  The backup ran for miles, and it took us nearly 90 minutes to get past it.  As we finally entered the construction zone, I saw exactly what was wrong with the short section of road the state deemed unusable:  there were orange cones on it.  As far as I could tell, that was it.

Before that point, as traffic inched along, we had to pull off the road and onto the shoulder so Alana could step into the grass and empty her patoomba in front of several thousand witnesses.  It was dark by then, but countless spotlights attached to nearly-motionless vehicles ensured that no one behind us missed the show.  (If I understand the physiology correctly, a patoomba has two chambers; fortunately this was the liquid chamber.)

As usual when we travel, I was horrified to see the snacks people were buying whenever we stopped to fill the tank (or empty one of the girls’).  It’s amazing how many varieties of junk can be constructed from starch, hydrogenated oils and high fructose corn syrup.  It’s even more amazing to see how many people buy them.  My stomach was churning just from witnessing the purchases.

We learned our lesson on the drive from California when we moved here.  The girls are good travelers, but if they eat sugar and then have to sit still in a vehicle, there’s a fifty-fifty chance a meltdown will follow.  So during this trip, we were firm about it:  no junk.  I had one conversation that went like this:

So she did.  And despite what turned into a drive lasting more than nine hours, she and Alana didn’t have any temper-tantrums … although I nearly did when we finally passed the orange cones. 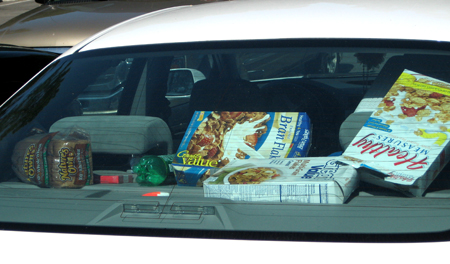 Someone else's idea of road food.