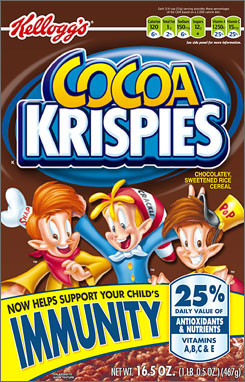 In case you haven’t noticed, Kellogg’s is attempting to cash in on the swine-flu hysteria by informing parents that cereals like Cocoa Krispies can help boost their kids’ immune systems.

Wow, sugary cereal is amazing stuff. According to the American Heart Association, it helps prevent heart disease, and now we’re learning that it wards off the H1N1 virus as well. Somebody call the Obama administration and tell them they can stop feeling embarrassed about promising we’d have 120 million doses of H1N1 vaccine ready by October. Turns out we don’t need it … we have Cocoa Krispies!

It’s too bad my daughters don’t eat cereal for breakfast. Sara, who will turn six this week, might’ve avoided the swine flu. Maybe I should tear into a few bowls of cereal myself, since I spent part of the weekend lying next to her, checking on her fever and unsuccessfully dodging her coughing fits.

The scientific basis (ahem, ahem) for the Kellogg’s claim is that a serving of Cocoa Krispies provide 25% of the recommended daily amount of a few vitamins, such as A, B, C and E. Whoopie. A cup of the stuff also provides you with a big wallop of sugar. Considering that sugar depresses your immune system, eating a bowl of cereal to get a few vitamins is a bit like drinking a bottle of scotch in hopes of ingesting the two aspirin you dropped in there. Maybe they’ll help with the hangover.

Linus Pauling demonstrated years ago that vitamin C helps white blood cells gobble up bacteria and viruses. The trouble with sugar (well, one trouble among many) is that it competes with vitamin C and blocks it from getting into your cells. The more sugar in your bloodstream, the less capable your body is of battling infections.

My daughter had the misfortune of coming home from school with flu symptoms on Friday —  the day before Halloween, the children’s high holiday of sugar-eating. On Saturday, her temperature rose to 103.5.  She still wanted to go trick-or-treating and we let her, figuring kids get maybe five or six good Halloweens in their entire lives and we didn’t want to take one away.

I had to leave before dark to perform in a production of Twelve Angry Men, so my wife took the little witch — accompanied by her gypsy little sister — to a dozen or so houses on our street. Sara soon lost her will to spook the neighbors, however, and my wife had to carry her home.

I reminded her the next day that sugar is bad for her immune system, and for once she didn’t ask to review the scientific literature to make sure I wasn’t just scheming to deprive her of her right to candy. She negotiated her way into eating one small piece.

We elected awhile back not to seek out the H1N1 vaccine — I’m not sure we could’ve found any, given the shortage — but for the past few weeks, I’ve been making sure my daughters take their multivitamins, and I’ve been giving them an additional 1,000 units of vitamin D, which has been shown to boost the immune system.  (I’ve also been taking 6,000 units myself.) When Sara came home with the flu, I upped her dose to 2,000 units.

On Sunday afternoon, her fever inched up to just over 104 and she threw up a couple of times.  We don’t know for sure it was swine flu, but she certainly had the symptoms, and that’s supposedly the only flu going around right now.  Since she didn’t feel like eating, I made her a small protein shake and mixed in some coconut oil.

She was sick again late Sunday night. We’re big believers in the power of positive thinking, so as I lay next to her with her head on my shoulder, I told her something she always loves to hear: “Sara, you’re a tough chick.” (And she is. Her two favorite phrases, in order, are “Watch this!” followed by “I’m okay.”)

She agreed. “I know, Daddy. I’m a tough chick. My body is killing the flu.” Then, since a high fever puts her in a mental state that resembles being happily drunk, she babbled on for some time, recounting detailed storylines of some of her favorite TV shows, giving me a blow-by-blow of her week in school, and expressing her doubts about the constitutionality of the Federal Reserve System. (I might’ve imagined that last one. I was getting tired.)

She woke up this morning with no symptoms and no fever. She was bouncy and energetic all day. In the afternoon, her temperature rose to 99.6, then dropped again. Before bed, she told me she’s not sick anymore and wants to go to school tomorrow.

If this was the swine flu, she beat it in three days — and she’s never eaten Cocoa Krispies in her life. I’m reasonably sure her immune system was better off without the stuff. 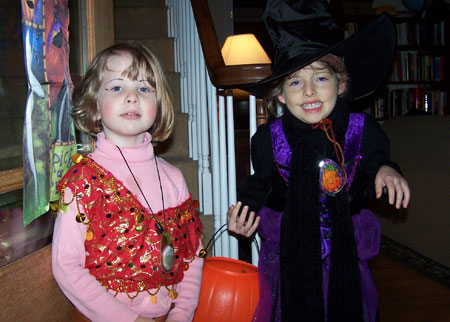 Small gypsy, and a witch with the flu.