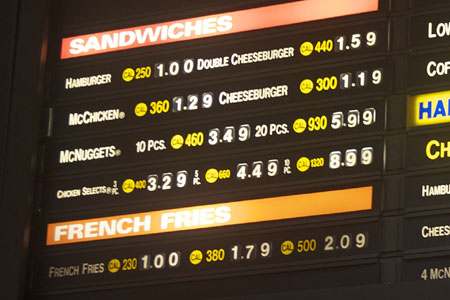 In a previous post, I ranted about the idiotic laws being passed in some states that force restaurants to list calorie counts right on the menu.  This is some of what I wrote:

After theorizing what will probably happen if forcing a fat person to look at the calories actually does inspire him to order a smaller meal (he’ll go home, kick the dog, and eat a bag of Doritos and a pint of Chunky Monkey), I suggested the most likely outcome of calorie-count laws:

The study, by several professors at New York University and Yale, tracked customers at four fast-food chains – McDonald’s, Wendy’s, Burger King and Kentucky Fried Chicken – in poor neighborhoods of New York City where there are high rates of obesity.

It found that about half the customers noticed the calorie counts, which were prominently posted on menu boards. About 28 percent of those who noticed them said the information had influenced their ordering, and 9 out of 10 of those said they had made healthier choices as a result.

But when the researchers checked receipts afterward, they found that people had, in fact, ordered slightly more calories than the typical customer had before the labeling law went into effect, in July 2008.

Let’s see, what can we say about this result? I believe the word I’m looking for is … DUH!!!

Calorie counts for fast-food restaurants are already available in diet books, on the internet, on placemats in the restaurants, and in nutrition guides sitting on the counter.  The people who actually care about calorie-counts have already found them.  The reverse is also true:  the people who haven’t found them already don’t care.

I’ve never understood why government busy-bodies have such faith in the power of warning labels to influence behavior.  Go into any bar in California, and you’ll see a big sign inside warning that excess alcohol consumption can cause birth defects.  That’s true, of course, but who exactly is this sign for?  I guess we’re supposed to believe lots of conscientious pregnant women wander into bars, all ready to order a double boiler-maker, then read that sign and say, “Oh my gosh, I didn’t know that!  Thanks for the warning.  Give me an orange juice.”

Newsflash:  the kind of woman who would get drunk while pregnant isn’t going to be swayed by a sign.  Neither will the kind of people who would rather load up on sugar and starch than be healthy.

These nanny-state laws are based on two assumptions: 1) People are stupid and don’t know when they’re over-eating, and 2) if the government insists the stupid people are informed exactly how much they’re eating, they’ll wise up and eat less.  Both assumptions are wrong.

People just aren’t that stupid; they know they’re getting a lot of calories when they order these meals.  They also don’t care:

Tameika Coates, 28, who works in the gift shop at St. Patrick’s Cathedral, ordered a Big Mac, 540 calories, with a large fries, 500 calories, and a large Sprite, 310 calories. “I don’t really care too much,” Ms. Coates said. “I know I shouldn’t, ’cause I’m too big already,” she added with a laugh.

New York City health officials said that because the study was conducted immediately after the law took effect, it might not have captured changes in people’s behavior that have taken hold more gradually.

Riiiiiggght … if you shove the calorie-counts in a fat person’s face, it may take a year or two before it all sinks in and he says to himself, “Hey, wait a minute … I shouldn’t be eating this much.  Give me a salad.”

Perhaps we’re just seeing the health nannies express a belief that, as I pointed out in Fat Head, seems to be dearly held by the type of people who loved Super-Size Me:  poor people are stupid.  Here’s The Guy From CSPI saying more or less exactly that:

“Nutrition is not the top concern of low-income people, who are probably the least amenable to calorie labeling,” said Michael F. Jacobson, executive director of the Center for Science in the Public Interest, a nonprofit health advocacy group in Washington.

Uh … Michael, who exactly is amenable to calorie-labeling?  Well-educated rich people?  These laws were championed as a way to “help” poor people who eat too much fast food to make smarter choices, remember?  Surely it’s time to just give up.  But noooooo:

Nutrition and public health experts said the findings showed how hard it was to change behavior, but they said it was not a reason to abandon calorie posting.

Let’s see … we imposed an expensive and complicated program on the restaurants that failed to produce anything remotely resembling the results we predicted, but there’s no reason to abandon our approach.  Brilliant.  But hey, that’s the beauty of being in government:  other people pay for your mistakes, so why not keep making them?  Or as the economist Milton Friedman once said, only in government is failure viewed as a reason to keep doing the same thing, only more of it.

And that’s my biggest fear … they will keep doing more of it:

Calorie posting has even entered the national health care reform debate, with a proposal in the Senate to require calorie counts on menus and menu boards in chain restaurants.

Anyone want to place odds on the likelihood that the Senate will see what happened in New York and conclude that menu laws are a waste of time and money?  I’ll bet you dollars to donuts they don’t — and you can keep the donuts even if I win.  No, they’ll probably just come to the same conclusion this guy did:

“I think it does show us that labels are not enough,” Brian Elbel, an assistant professor at the New York University School of Medicine and the lead author of the study, said in an interview.

Not enough?!  That’s the scariest statement in the whole article.  Lord only knows what the food evangelists will try next.

(Hat tip to Adam, who sent me a link to the NYT article.)

15 thoughts on “Menu Laws: Still A Load Of Bologna”