Media folks are fond of saying the camera never lies.  I’ve always thought that’s a load of bologna.  A camera is only as honest as the person behind the lens.  If  you’re shooting pictures at a rally for a political candidate you don’t like, you can choose to ignore the thousands of cheering supporters and focus instead on the little group of angry protestors.  Your pictures then emphasize conflict and dissent, when there was actually little of it.  (Not that our press would ever pull such a stunt.)

Pictures can also be posed or altered. In the old Soviet Union, officials who had fallen out of favor used to routinely disappear from state photos … and probably from the earth as well.  That required talented artists.  But these days, anyone with a computer can fire up a copy of PhotoShop and create pictures that lie.

Which brings me to this rather interesting weight-loss story Jason Sandeman of Well Done Chef! forwarded to me.  To sum it up, a formerly-fat female chef is now thin and lovely.  She was miserable then, she’s happy now, she can wear a smaller dress size, blah-blah-blah, etc., etc., etc.

As usual, the story misses the point about her diet:  it’s clear from the list of foods she used to eat that she was a major carbivore, but of course the writer focuses on the fat and calories.  But that’s not what inspired Jason to send me this story.  Take a good look at the before and after pictures: 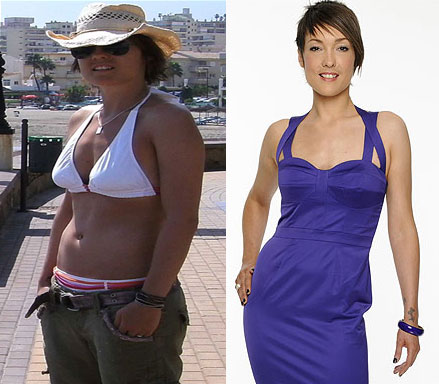 Notice anything strange about the before picture?  Her face is way too wide.  So are her hands.  She’s literally big-boned in that picture, but not in the after picture.  My weight has varied by 35 pounds over the past decade, but my hands and cheekbones never tried to keep up with my belly. So unless Miss Skinny Chef went on a special bone-shrinking diet, the before picture was stretched for dramatic effect.

After laughing at the obvious fakery, I fired up my own copy of PhotoShop and squeezed the picture until her skull resumed what appeared to be normal proportions.  In doing so, I also noticed the stone tiles went from rectangles to squares, which is probably what they are.  Now look at the supposedly fat chef: 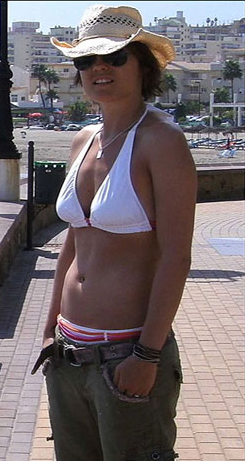 You know what I see there?  With appropriate apologies to my wife, I see a hottie with some good muscle tone.  If this is actually the same woman (I have my doubts), it’s ridiculous to label her as overweight.

I said it in the film, I’ve said it in interviews, and I’ll say it again here:  the obesity epidemic has been exaggerated to suit the goals of the weight-loss industry.  If you check the story, you’ll notice it explains that Skinny Chef  lost weight on the Cambridge Diet – one of those stupid, semi-starvation, liquid diets.

If this woman truly did consider herself overweight and chose to slim down by eliminating the sugar and starch from her diet, I’d be all for it, because she’d be getting healthier in the process. But too many people focus exclusively on weight.  They become so desperate to shrink themselves, they go on semi-starvation diets that end up wrecking their metabolisms – or worse, they let a surgeon cut apart their stomachs and bypass a crucial section of the digestive system.

Looking great in a dress is nice – but not if you’re being buried in it.  Choosing a diet should be about health first and foremost.  How you appear on camera is secondary … even if the camera is telling the truth.

17 thoughts on “Stretching The Truth”