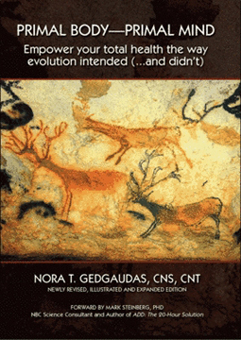 There’s an old saying that when you’re holding a hammer, everything looks like a nail.  If you’ve got a malfunctioning pancreas, a surgeon is likely to decide you need surgery, a medical doctor will decide  you need a prescription drug, and a therapist will suggest you heal your inner child so it will stop taking its emotional wounds out on your pancreas.

Sometimes these modern therapeutic tools are exactly what we need.  But sometimes they’re not.  Sometimes what we really need is a good, old-fashioned, stone-age tool … such as a hunter-gatherer diet.

Here’s an example: some years ago, as I’ll explain shortly, I thought I needed a 12-step program, and perhaps some therapy to go along with it.  Turns out I actually needed a medium-rare steak.

I thought about that while reading Primal Body–Primal Mind, by Nora Gedgaudas.  The book covers a wide range of health topics – nutrition, metabolism, exercise, weight loss, vitamins and supplements, depression and other emotional issues – but ties them all back to one central idea:  physically, we are virtually identical to our Paleolithic ancestors.  We may drive minivans and listen to modern jazz on iPods, but our bodies and brains haven’t really evolved past the stone-tools era.  Your great-grandfather to the 10th power thrived on particular nutrients, and so will you.  The reverse is also true:  you probably won’t thrive if you fill you belly with foods he never ate.

Nora obviously ploughed through an enormous amount of research to write this book, and she summarizes it quite nicely.  She explains biochemical concepts clearly, while managing to sneak in a bit of humor here and there – always a plus with me.  I enjoy a book when the information is dense, but the writing style isn’t.

But what I especially liked is the reason she wrote the book.  Nora is a clinician who helps address brain malfunctions with a technique called neurofeedback, a kind of biofeedback for the brain.  With electrodes attached to your head, you play something akin to video games on a computer, and retrain how your brain responds to stress.  She’s used this high-tech tool to help clients with everything from depression to autism with impressive results. 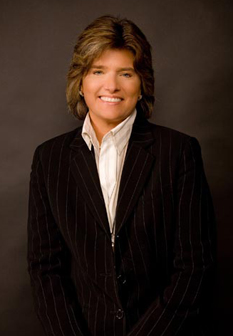 And yet, she sometimes found that clients would make minor improvements, then stall.  Since she’s been studying nutrition for 25 years, she recognized that the neurofeedback treatments were being stymied by brain malfunctions that were rooted in a lousy diet.  As she explains in the preface:

“The brain and the body simply have to have certain raw materials to work with in order to function properly.  It is abundantly clear that all the brain-training in the world cannot create a nutrient where there is none, or remove a problematic substance which does not belong.”

So despite wielding a modern and effective tool, she knew these people needed a stone-age tool as well.  Tired of having to copy countless research articles on Paleolithic nutrition to give to her clients, she wrote Primal Body-Primal Mind so she could hand them a book instead.  It’s no surprise, then, that the book includes chapters detailing how the wrong diet can lead to depression, anxiety, ADD, bipolar disorders, and yes, alcoholism.

Which brings me back to that medicinal, medium-rare steak.

Back in my starch-loving vegetarian days, I had a problem with alcohol.  The problem was that I craved the stuff.  If I drank a beer, I soon wanted another.  Then another.  Then another.  And if I didn’t have another, my brain would start to shut down.  I remember becoming sleepy and lethargic at parties, but feeling alert again after drinking yet another beer.  I even wondered how a supposed depressant could produce this effect.  (I never wondered for too long, because eventually I’d be drunk.)

Not wanting to be a lush, I swore off alcohol for long periods.  But I still craved the stuff and still got pretty drunk now and then, so eventually I started attending AA meetings.

But a funny thing happened on the way to the 12th step:  I changed my diet.  After reading The Zone, I cut my carbohydrate consumption drastically and, for the first time in years, started stocking my refrigerator with meats.  I tossed the vege-burgers and the soybean mayo, and started cooking chicken and steaks.  I felt better, my overall mood improved, and I lost weight.

I also lost the desire to drink.  I quit going to meetings because I didn’t see any point in continuing, and frankly, I have a limited tolerance for listening to people recount every stupid thing they ever did while drinking.

(Before any recovering addicts decide to fire off an angry email, take note:  I’m not saying 12-step programs don’t have a place and don’t help people.  I’m saying I no longer needed one.)

A couple of years later, an immigrant waiter in a Lebanese restaurant served me a Lebanese beer instead of the non-alcoholic beer I’d requested.  I didn’t realize the mistake until I’d finished it.  I wondered what would happen.

What happened is that I enjoyed my lamb.  That’s it.  I didn’t want another beer.  The same thing happened when I intentionally ordered a beer a month after that, and again when I tried a glass of wine a few weeks later.

I still drink a beer, or a glass of wine, or a single-malt scotch now and then, but I don’t crave the stuff.   I’m not fighting the urge to keep drinking, because the urge isn’t there.  I literally can’t remember the last time I downed a sixpack, which I used to do quite easily … often as a warm-up for downing another one.

So why did changing my diet make such a difference?  I’ve wondered many times over the years.  Nora’s section on alcoholism offers a pretty good clue:

“Alcoholics are utterly dependent upon and regularly seek fast sources of sugar – alcohol being the fastest … the problem in alcoholism, in fact, really isn’t alcohol per se, but severe carbohydrate addiction … Once cravings for carbohydrates and dependence on carbohydrates as the primary source of fuel are eliminated, so are the alcohol cravings.  Training the body to depend upon ketones rather than sugar for fuel is key to this equation.”

I wasn’t addicted to alcohol; I was addicted to having fuel for my brain.  Thanks to my starchy, meatless diet, I was a sugar-burner. When I drank, I instantly became an alcohol-burner.  If I didn’t keep drinking, I’d run low on fuel and my brain would scream for more.  I didn’t need therapy, I didn’t need atonement, and I didn’t need to heal my inner child.  I needed to stop living on starch.

Which makes me wonder:   how many people are currently in therapy, when what they truly need is a Paleolithic diet?  How many people are sitting in some shrink’s office, feeling depressed and talking endlessly abut their mothers, because too many sugars and processed vegetable oils have screwed up their hormones?  How many kids are given a daily dose of drugs for ADD,  just before they finish up that big bowl of Cocoa Puffs and head off to school?

After reading Primal Body–Primal Mind, I’ve convinced that many (if not most) of these people don’t need drugs, and they don’t need therapy.  They need a stone-age hammer.